Iran: Firmly behind the Assad regime 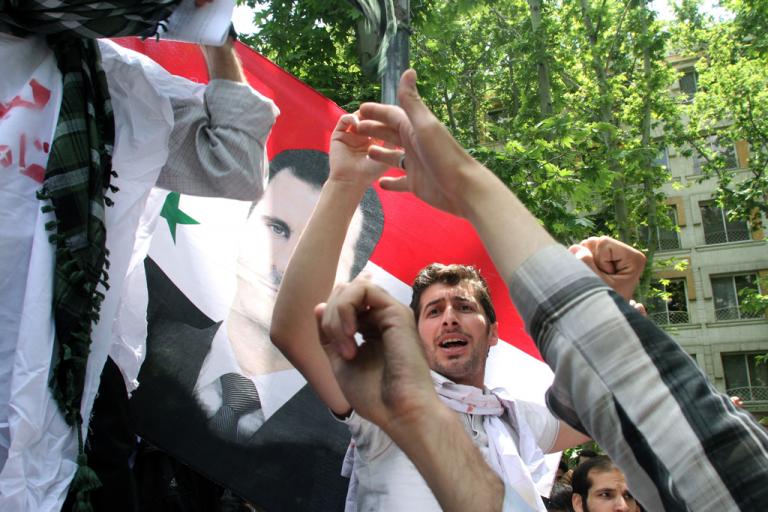 Holding up the Syrian flag, Iranian and Syrian students attend an anti-Israeli demonstration in front of the United Nations offices in Tehran, on May 6, 2013, to condemn Israeli air strikes on targets near the Syrian capital Damascus. - ((Atta Kenare/AFP/Getty Images))

TEHRAN — Saeed Mohammad Husseini sat behind the counter at a store selling religious CDs as he explained his support for President Bashar al-Assad in the Syrian civil war.

“I support Shias all over the world, including the Shia leader Assad,” he said with a smile.

When informed that Assad is Alawite, he looked confused. The Alawites, a small but powerful minority in Syria that began as a split-off from Shia Islam, revere some of the early Shia leaders. Upon hearing that, Husseini nodded his head.

Iranian leaders say they support Assad as a bulwark against Israel, the US and Sunni extremist rebels. Inside Iran, however, they rally supporters such as Husseini with appeals to defend Shia Islam against what they refer to as ‘takfiris,’ an Arabic word from the Koran that forms the basis for labeling apostates.

At its core, Iran supports the secular Assad government for geopolitical reasons. Syria allows shipment of arms and supplies to the Lebanese group Hezbollah, part of what they see as the wider regional alliance against the US and Israel.

But some Iranians perceive the battle in religious, not political terms. They see the Syria war as part of an attack on Shia throughout the region, according to Foad Izadi, assistant professor in World Studies at the University of Tehran.

Some deeply religious people see that “there are Salafis threatening to blow up the shrines,” he told GlobalPost. “They don’t know enough to realize that the Assad government is not a Shia government, and [it is] actually secular.”

As the Syrian civil war continues into its third year with little end in sight, the political struggle has taken on an increasingly religious dimension. Opportunist leaders on both sides use age-old religious disputes to justify current atrocities.

The Sunni governments of Turkey, Saudi Arabia and Qatar are supporting the rebels, including extremist groups associated with Al Qaeda. The US has recently announced plans to openly arm moderate Sunni rebels, but can’t guarantee where those munitions will end up. Iran, Iraq’s Shia government and Hezbollah are all backing Assad, who has used planes and missiles to attack civilians.

Iran has veered from trying to mediate the civil war in the early months to becoming an enthusiastic backer of Assad’s military plans. While Iranian leaders use religion to rally the faithful, their motivations are political, economic and military.

Iran’s support for Syria dates back to 1980 when Saddam Hussein’s Iraq attacked Iran in what was to become a bloody, eight-year war. Syria was mortal enemies with Hussein and became the only Arab country to side with Iran in that war. After the war, Iran invested billions of dollars in Syria, including the building of auto and other factories.

Syria and Iran developed what they called a “resistance front” to the US and Israel, which also included Hezbollah and the Palestinian group Hamas.

From the beginning, said Prof. Izadi, Iran worried that “if the Assad government fell, the replacement would have much stronger ties with US government and Israeli government … That was the dilemma that Iran had.”

The resistance front forced the withdrawal of Israeli troops from Lebanon in 2000 and repelled its invasion of that country in 2006, according to Hossein Ruyvaran, a leader of the Society for Defense of Palestinian Nation, an Iranian advocacy group based in Tehran.

“Iran is the pivot of this coalition,” he told the GlobalPost.

That’s precisely what bothers US policymakers.

“Today, Iran is training, arming, funding, aiding and abetting the Assad regime and its atrocious crackdown on its own people,” US Undersecretary of State for Political Affairs Wendy Sherman told the US Senate. “Iran has made it clear that it fears losing its closest ally and will stop at no cost, borne by both the Syrian and Iranian people, to prop up the Assad regime.”

While US officials publicly decry the costs borne by the Iranian people, at least so far, many Iranians appear to support their government’s position on Syria.

“I’m willing to fight for Syria,” said Ph.D. student Zahra Jahanbakhashian, during a random street interview. “They don’t accept women fighters, but I could do other things.”

Moderates and reformers, who came out in large numbers to elect the new President Hassan Rohani on June 14, are reluctant to criticize the government’s Syria policy, according to journalist and political activist Abbas Abdi. He helped lead the 1979 student takeover of the US Embassy and later became a leader in Iran’s reform movement.

In 2009 millions of Iranians demonstrated against perceived fraudulent presidential elections in what became known as the Green Movement. Abdi described himself as a reformer and not part of the banned Green Movement.

Many “greens” would normally favor the rebels, because “they oppose anything Iran supports,” said Abdi. But they also recognize that some rebels are strongly influenced by Sunni extremists affiliated with Al Qaeda, he said.

“They are confused because the rebels have long beards and Assad’s supporters wear fashionable clothes,” said Abdi with a chuckle.

For many conservative Iranians, the Syrian war represents a religious battle against Sunni extremists. The intentional killing of civilians and threats to destroy holy shrines makes them impure Muslims, or takfiris.

Both Iran and Hezbollah said they want to prevent destruction of holy Shia shrines in Syria. They well remember when Sunni militants blew up the Shia al-Askari mosque in Samarra, Iraq, in 2006. That bombing led to retaliatory attacks against Sunnis and initiated the civil war in Iraq.

“From the beginning, we wanted to prevent another Samarra,” said Ruyvaran.

In recent months, Sunni extremist groups in Iraq have bombed hundreds of Shia civilians in an effort to rekindle the country’s civil war. Hezbollah and Iran justify their military interventions as an effort to prevent such sectarian war in Syria.

Hezbollah sent troops to protect the Sayida Zeinab shrine outside Damascus. Zenab was the granddaughter of the Prophet Mohammad and daughter of Imam Ali, a revered leader of Shia Islam.

“The shrine is very inspirational,” said Ruyvaran. “Any disrespect to the shrine would cause conflict between Shia and Sunni. So Hezbollah protected it.”

Hezbollah has not revealed how many fighters it has in Syria, but Ruyvaran estimates the number at 6-8,000.

From the standpoint of the rebels, Hezbollah uses the excuse of protecting the Sayida Zeinab shrine in order to station troops in a strategic location near Damascus. They say they are fighting Hezbollah troops, not attacking Shia shrines.

Iran says it does not send combat troops to Syria, only military advisers under terms of a longstanding treaty.

“If we had combat troops, the dead would have come home,” Ruyvaran said. “There have been no funerals.”

The European Council on Foreign Relations writes that Iran has also sent several hundred specialized intelligence and police officers to instruct the Assad government in the repressive techniques Iran developed after its 2009 crackdown on the Green Movement.

While Iranian officials portray themselves as protectors of holy shrines and leaders of the resistance front against Israel, the Syrian war has produced significant splits in their resistance front.

Hamas, the Palestinian group that currently controls Gaza, broke with Assad during the early days of the uprising and supports rebels associated with Syria’s Muslim Brotherhood, a Sunni group long opposed to Assad.

Khalid Meschal and other Hamas leaders, who had lived in Damascus for years, closed their office and moved to Doha, Qatar. In earlier interviews with this reporter, Hamas officials in Gaza made clear their support for the Syrian rebels.

“We are with the people wherever they are fighting for their political and economic rights,” said Ziad El-Zaza, Gaza’s former deputy prime minister. “The blood of Arab martyrs is on the heads of the government leaders in Syria.”

How does Iran explain the fact that their longtime ally now supports allegedly takfiri rebels in Syria? Iranians claim that Hamas is actually split on the issue.

“Hamas is very fragmented,” said Seyed Mohammad Marandi, an associate professor at the University of Tehran. “Within Hamas there are people who don’t agree with the current policies of Hamas. There are those who fully agree….”

Other analysts say Iranian leaders are engaging in wishful thinking when it comes to Hamas and Assad.

“Within Hamas there is no major split,” admitted Prof. Izadi. “Hamas has moved away from Assad.”

“Iran didn’t do anything about Hamas because it was more important to fight Israel,” he said. “Of course they cared about the issue, but it wasn’t as important as fighting with Israel.”

Recently, however, Iran has put financial pressure on Hamas by cutting back financial support to Gaza. Iran had reportedly been paying $20 million per month but sharply reduced the aid over the past few months.

Ahmed Yousef, an advisor to the Gaza prime minster, said “We never expected that a country like Iran, which talked about oppressed people and dictatorial regimes, would stand behind a dictator like Assad who is killing his own people.”

Prof. Izadi said Iran faces a serious dilemma in Syria, which it realizes is majority Sunni.

So, he said, “An ideal situation for Iran would be to have a [Sunni] religious government that is tolerant of Syria.”

During the initial months of the uprising, Iran met with Syrian opposition leaders to seek a political settlement. But the Syrian Sunni leaders didn’t trust Iran. And Assad was never willing to share power, let alone resign, as demanded by the opposition.

Iran has put forward a peace plan that calls for a ceasefire, lifting of sanctions against Syria, release of political prisoners, forming of a transitional government and then holding free elections under international supervision.

But the Iranians want Assad and his cronies to be part of the transitional government, a position immediately rejected by the opposition.

“We should not describe as oppressive brutal actions in an enemy country while refraining from calling the same actions oppressive if they take place in a friendly country,” he said. “Brutality must be called brutality.”

It remains to be seen whether Rohani continues such criticisms and if he has the power to change longstanding military policy towards Syria.

The military coup d’etat that overthrew Egypt’s President Mohammad Morsi further complicates matters. Morsi had been a strong supporter of the Syrian rebels. The new military leaders in Egypt will likely focus on domestic issues in the short run, possibly weakening international support for the rebels.

So far neither the Assad government nor the rebels appear ready to enter serious peace talks. Each hopes for decisive military success. Assad has initiated an offensive to take back the city of Homs, which is partially controlled by rebels. More than 1,000 opposition militias now operate in Syria, and they are unlikely to voluntarily give up control of their fiefdoms anytime soon.

So Iran continues to back Assad and Hezbollah’s military offensives, encouraged by the retaking of Qusayr, although much of the city was destroyed.

Iran wants to get a sector of the opposition to realize that “Assad is not going to fall anytime soon,” according to Prof. Izadi. Perhaps some of the moderate opposition would then join an Assad cabinet. If that works out, then Syria would enter a period in which “old words are healed.”

That scenario seems highly unlikely given the current military standoff. Izadi said Iran and the rebels can agree on one point.

“Syria is not going to be the same,” he said.