ON THE GROUND IN DES MOINES, IA 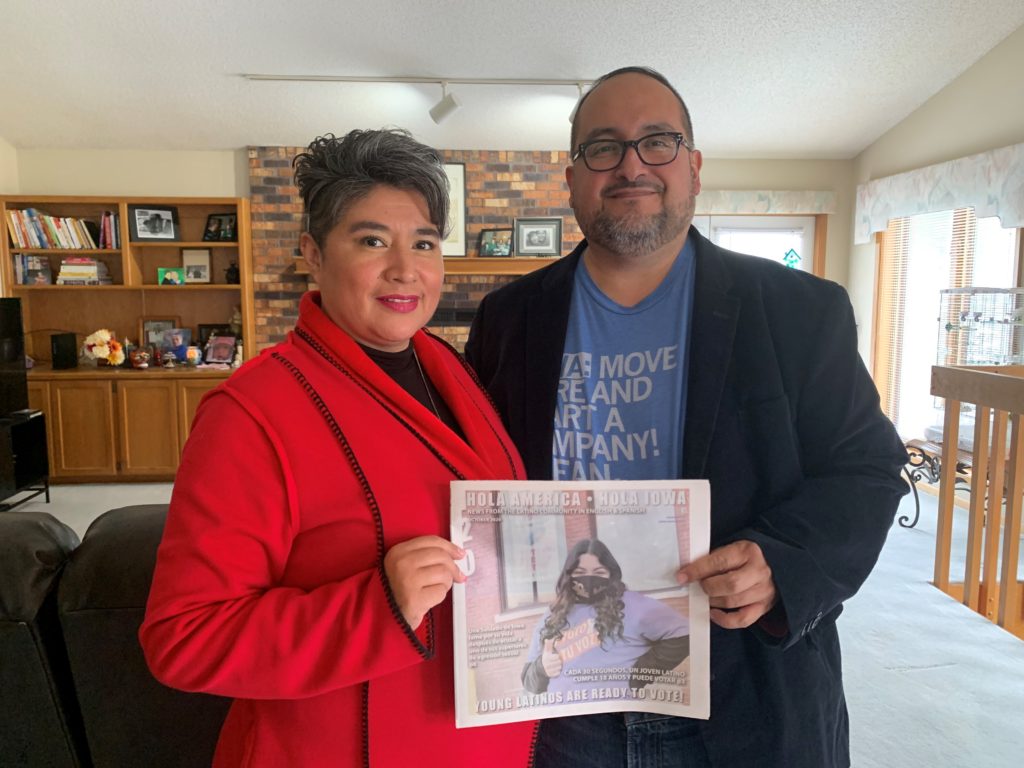 Tar and Erika Macias pose for a photo in their home in West Des Moines, Iowa on Monday, Oct. 16, 2020. They hold a copy of the most recent print edition of Hola America – Hola Iowa. For the issue, they focused mainly on the election and how to vote. They publish their stories in both English and in Spanish. (Photo by Kassidy Arena/GroundTruth)

DES MOINES, Iowa — The smell of pancakes, chilaquiles and freshly brewed coffee hover in the air around the doorway into Erika and Tar Macias’ house, in West Des Moines, Iowa. Their little dog barks and jumps about an inch off the ground. Two birds chirp over the music playing from their cage in the living room and papers from their self-run business fill the kitchen counter tops.

They own, run and write for Hola America/Hola Iowa—a bilingual multimedia company they founded about two decades ago.

“I didn’t want there to be a void for our community,” Tar said.

Things have not slowed down since they started. Tar said more than 100,000 people engage with their content on social media every month and have about 20,000 visitors every week on their website, not too shabby for two Mexican immigrants running a business highlighting the Latino community smack dab in the middle of majority white Iowa.

It’s obvious if someone wants to understand, or report, on the growing Latino population in Iowa, the Macias’ hold the key to one of the most close-knit communities in the state. Almost all the state’s Latino leaders, notably the League of United Latin American Citizens (LULAC), point new journalists covering the Latino population in their direction.

Michael Reyes, former LULAC state director, said Tar and Erika’s work has been “paramount” to both Spanish speakers and English speakers in the state. “With Hola America/Hola Iowa, it’s a refreshing aspect that the Macias’ have brought to the table,” Reyes said.

Reyes’ use of the word refreshing acts in stark contrast to what he said mainstream media does for Latino communities. Reyes said sometimes they can play into lumping all Latinos together into one group. The Macias’ do the opposite: publish thoughts from all sides and viewpoints of Iowa Latinos. In a highly divisive election year, sometimes they have gotten accused by some readers of being too liberal or too conservative.

“The content that we create is not a reflection of us, it’s actually a reflection of our community,” Tar said. “I don’t want it to be ‘Hola Tar,’ it’s Hola Iowa. It’s all of us.”

Originally from Mexico City, Tar considers himself “bicultural.” At 14, he moved to Moline in western Illinois, where he crossed the state border into Iowa many times during the day. He saw the local bilingual paper in the Quad Cities area struggling, so he helped out. It eventually went under. But Tar had decided to “give it a crack,” and start his own newspaper: Hola America. It was a hyper-local paper focused on the Latino community printed in both Spanish and English.

That was in the year 2000, when only 2.8% of the population in Iowa was Hispanic or Latino. It did so well in earning loyalty among that population, another source that covered news all across Iowa was born: Hola Iowa. But this time, Tar had the help of Erika, his partner and “secret weapon.”

“It’s been an adventure because, for me, I had to assimilate to the new culture, because as an immigrant, you have so many barriers,” Erika said, a single mother of three when she met Tar. Originally from Michoacan, Mexico, she interweaves Spanish and English often, and naturally.

The acculturation to Iowa’s Latino culture, though, seasoned the couple to feel like el padre y la madre. People run to say hello to Erika at events.

“It’s just for me, my family, my babies, Hola America, Hola Iowa, I always say ‘my family’ as a whole, I think creates a passion for doing what we do,” Erika said, laughing. “When you are a parent, you have to take care of the babies.”

She and Tar agreed that in order to properly take care of their Hola babies, they needed to allow their relationships with the community to flourish. And that meant traveling all across the state with their actual babies so people could meet them and learn to trust them.

But they distinguish themselves from journalists and photographers. “I respect that profession so much that I’ll never call myself a journalist or a photographer,” Tar said. Rather, they said they are connectors. They connect the Latino community with information, relationships and opportunity, something otherwise not readily available to them in a predominantly white state known for its agriculture.

Their media operation is not necessarily about making money, Tar said. “Sometimes I think I would make more money if I just got a 9-5 job. But, we like what we do.”

Reyes, who has read Hola Iowa – Hola America since it first published, believes it does a far better job of covering the Latino community.

“Mainstream papers do not always address, especially when it comes to issues relating to Latino communities, our issues and concerns,” Reyes said.

The Macias’ said they treat everyone with the same dignity and attention, whether it’s the governor of Iowa or a waiter at a restaurant.

“Somos autenticos, lo que ves, es lo que te llevas,” Erika said. We are authentic. What you see is what you get. “And Erika is likable, and I would call myself an acquired taste,” Tar added. “Como se dice? Sweet and sour,” Erika summed up.

Their stories personify the diversity in the Latino Iowans. They know to avoid Spanish slang and stick with the most general terms to try to apply to all of Iowa’s Spanish-speakers, whether from Mexico, Chile or Spain. Even so, Latinos in Iowa have remained a stubborn minority in Iowa’s population. As of last year, just under 200,000 Iowans identified as Latino. Yet, the bilingual news sources of Hola Iowa and Hola America have continued to hit thousands of clicks a day on their social media accounts from all over the state. They cover national stories with a local spin, like the impact of one Mexican restaurant on a national level.

Monica Vallejo has followed Hola Iowa for years from Cedar Rapids, which is about two hours away from where Tar and Erika live. Yet, she said the Macias’ have brought together the Latino community in Cedar Rapids. She described them as Cedar Rapids’ compadres. They helped institute a LULAC chapter and also led some recovery efforts after the derecho swept through the state, which hit Cedar Rapids particularly hard. Vallejo said the Latino community would not have been brought together in the city if it weren’t for the help from Tar and Erika.

“They are very warm people. I think they impacted my life to be part of different programs and not feeling lonely in Cedar Rapids,” Vallejo said.

She described the Macias’ as her mentors, which is something they don’t take lightly. Erika and Tar frequently mentor young Latinos to help them navigate through the professional world. It opens doors for the whole community; if they can help someone reach the door knob, they will work as hard as they can to make sure it happens.

Kassidy Arena covers the Hispanic/Latino and Spanish-speaking community Iowa Public Radio. This dispatch is part of a series called “On the Ground” with Report for America, an initiative of The GroundTruth Project. Follow her on Twitter: @KassidyArena.