Why investment in diplomacy is money well spent 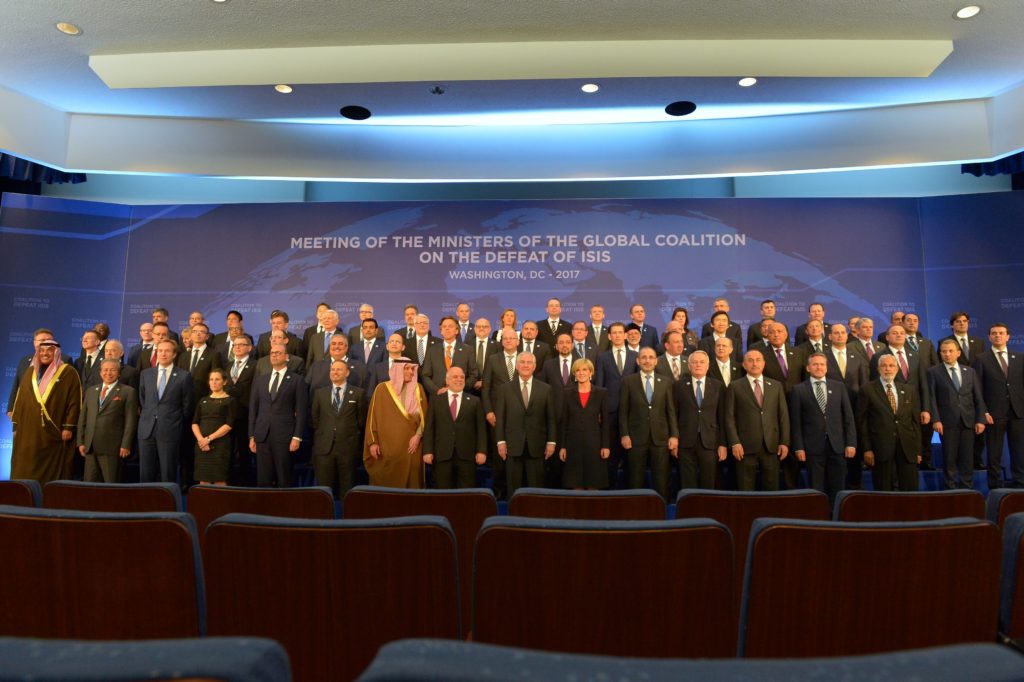 U.S. Secretary of State Rex Tillerson poses for a "family photo" with counterparts at the Meeting of the Ministers of the Global Coalition on the Defeat of ISIS in Washington, D.C. on March 22, 2017. (State Department/Public Domain)

WASHINGTON — Past a phalanx of black diplomatic SUVs and a cordon of military patrols, a global coalition of government ministers gathered inside the State Department to talk about defeating ISIS.

That’s when word came of an attack outside the British Parliament.

As we now know, four people were killed and 40 injured in a vehicular and stabbing attack Wednesday claimed by the Islamic State. Staffers at the shorthanded State Department coordinated with the U.S. Embassy in London and Secretary of State Rex Tillerson, who has been roundly criticized for his lack of communication, huddled with his team to issue a short statement that reflected the moment’s uncertainty.

“We condemn these horrific acts of violence, and whether they were carried out by troubled individuals or terrorists, the victims know no difference,” read the statement read.

By many accounts, the State Department is already “running on fumes,” considerably understaffed even before an exodus of senior leadership under Tillerson. On this day when crisis again forced American diplomacy to pull its weight, a group of retired diplomats warned that the U.S. is neglecting its Foreign Service and its peaceful relationships with the rest of the world.

And that could lead to more attacks like the one in London.

A bipartisan consensus has emerged that the Trump administration’s “hard power” plans to divest critical funds from the State Department — cutting 28 percent of its 2018 budget while ramping up military spending — would put Americans at risk and actually undercuts efforts to fight groups like ISIS.

“As a general principle, diplomacy is often far less costly than war to achieve our national purposes,” read a letter from the American Academy of Diplomacy and Council of American Ambassadors addressed to Senate Majority Leader Mitch McConnell. “Diplomacy is most often the first line of America’s defense.”

Last month more than 120 retired generals and admirals shared a remarkably similar message to the one put forward by retired ambassadors.

“We know from our service in uniform that many of the crises our nation faces do not have military solutions alone — from confronting violent extremist groups like ISIS in the Middle East and North Africa to preventing pandemics like Ebola,” read a letter addressed to Congressional leadership and copying Tillerson.

“The State Department, USAID, Millennium Challenge Corporation, Peace Corps and other development agencies are critical to preventing conflict and reducing the need to put our men and women in uniform in harm’s way. As Secretary James Mattis said while Commander of U.S. Central Command, ‘If you don’t fully fund the State Department, then I need to buy more ammunition.’ The military will lead the fight against terrorism on the battlefield, but it needs strong civilian partners in the battle against the drivers of extremism– lack of opportunity, insecurity, injustice, and hopelessness.”

No secretary is immune to criticism, but Tillerson’s department has created a maelstrom of incredulous critique by shutting out the press and defending Trump’s proposed cuts to his department while moving away from decades of established norms around U.S. relationships with NATO, China and Russia. Massive cuts to U.S. funding of the United Nations are also on the table.

And with scandal after scandal swirling around the Trump administration, including evidence-backed allegations of improper relationships with Russian leadership, it doesn’t help that Tillerson told reporter Erin McPike of the Independent Journal Review, the one journalist permitted to accompany him on his trip to Asia this month, that he “didn’t want this job.”

“My wife told me I’m supposed to do this,” confided the former Exxon CEO, the first secretary of state in history to have neither political nor military experience.

Questionable policy and commitment to the job is fuel for the fire for Foreign Service retirees like Ambassador Chas W. Freeman, Jr. who offered decades of service to advance American interests. State became the country’s first executive department in 1789, and today employs approximately 70,000 people representing the U.S in more than 200 locations worldwide. The legacy is a proud one, if opaque to outsiders.

“International reactions to the election of Donald Trump have catalyzed a far swifter collapse of the American-led world order than anyone could have imagined,” Freeman said in a lecture at Brown University earlier this month.

“The Trump administration’s rejection of multilateralism marks a major step back from international leadership by the United States. It signals that America no longer seeks to make and interpret the rules that govern the world’s political, economic, and military interactions.”

Rep. Brendan F. Boyle, a Democrat representing Pennsylvania, added his appeal for a complete budget in an op-ed Wednesday:

“With instability and turmoil on the rise around the world, how can the administration cut the Department whose mission is to ‘shape and sustain a peaceful, prosperous, just, and democratic world and foster conditions for stability and progress for the benefit of the American people and people everywhere’ and at the same time promise to ‘Make America Safe Again’? These cuts only raise the stakes for rogue nations who may seek to test our inexperienced leader, and threaten to send a clear signal to our allies that they may want to rethink our longstanding relationship and seek other alliances.”

MORE IN Refugees and Migration