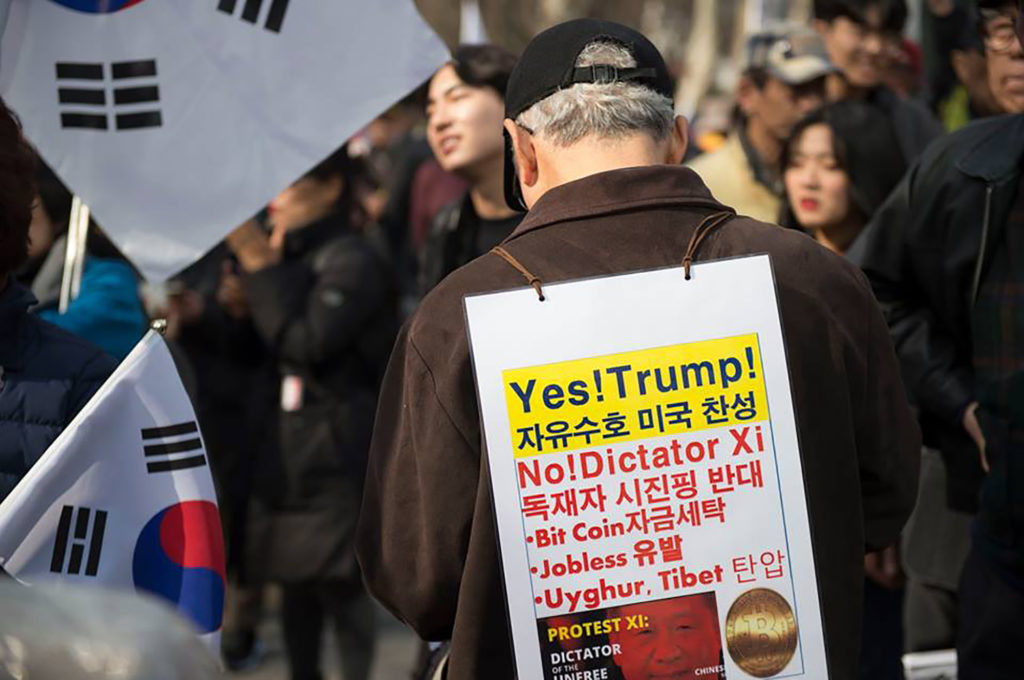 Religious beliefs, and the lack of it, help explain the political views Koreans hold. (Alan Mittelstaedt/GroundTruth)

SEOUL, South Korea — Travelers passing through Seoul Station escaped the spring rain and crowded around TV screens carrying news of Friday’s inter-Korean summit. Outside City Hall, workers created a giant mosaic of the peninsula out of sod and flowers. And the Ministry of Foreign Affairs launched a social media campaign using a new Twitter emoji, encouraging the public to “cheer us on!”

Seoul residents had managed to stay focused on the demands of daily life through months of escalating tensions with the North, exacerbated by the “fire and fury” exchanged between U.S. President Donald Trump and North Korean leader Kim Jong Un. But the planned first meeting between two Korean rulers since 2007 has managed to win their attention, if not their faith in a peace deal.

South Korean President Moon Jae-in is expected to meet face-to-face with Kim at Panmunjom — the blue-boxed “truce village” in the Demilitarized Zone. The location is highly symbolic. It will be the first time that the South will welcome a North Korean leader past the border  since the Korean War, which reached an armistice but not a treaty in 1953.

The rather abrupt shift from animosity to diplomacy brokered by President Moon around the Pyeongchang Winter Olympics is intended to lead to a one-on-one meeting between President Trump and Kim sometime in June.

The three-way conversation between South, North and the United States is part of a complicated post-war legacy defined by military might, economic transformation and religious fervor that might finally be moving toward peace and renewal. But despite the fanfare, many South Koreans are skeptical due to past diplomatic failures.

“I think it’s a good thing if our war ends,” Kim Na-hyun, a 20-year-old student from Daegu said while waiting at Seoul Station. “But South Korea has done a lot of this [diplomacy], and nothing has really worked … I’m not expecting too much.”

So far, both nations are getting their pleasantries in order: South Korea has shut off its K-pop and propaganda-blasting DMZ loudspeakers, for example, while North Korea has said that it’s willing to discuss denuclearization. North Korean media has even stated that Kim plans to suspend nuclear weapons tests, though the subtext of that message is that North Korea already has developed the weapons it has longed for — and therefore sees no need to test them.

In a matter of four or so decades, South Korea — in a strong alliance with the United States — has transformed from a poor, largely agrarian society to one of the world’s largest economies. Its capital city, Seoul, has made its name as one of the most populous, technologically advanced cities on the planet.

It’s a place where the subway is almost never late, where families live in “smart houses” and where school kids morph into flame-throwing superheroes at virtual reality cafes.

But for that same reason, South Korea has also become a nation of much division. The dramatic social and political change over a short period of time means that the elderly of Korean society likely lived through the devastation of the Korean War 65 years ago — while the young may see no evidence of the war at all.

It means that many middle-aged South Koreans grew poor and witnessed the bloody, pro-democracy movement that ended South Korean dictatorship in 1987. It means that South Korean millennials — with the privilege of growing up in a developed, democratic society — are struggling with high costs of living and a newfound youth unemployment crisis .

And the religious terrain can be particularly complex. Korean conservative Christians, for example, tend to be older in age, anti-North Korea and highly supportive of anything that has to do with a strong U.S.-South Korea military alliance.

As a result, they also tend to dislike President Moon Jae-in. He represents a revival of the Korean political left — especially after the impeachment of conservative former President Park Geun Hye in 2016 — and a reopened era of dialogue and cooperation with the North.

“[Conservative Christians’] view on the Moon Jae-in government tends to be very critical,” said C. Harrison Kim, an assistant professor at the University of Hawaii at Manoa who studies socialism in East Asia and North Korea. “They think he is just a puppet or just too pro-North, giving up everything for the sake of the North Korean leader.”

The roots of this religious-political tension go way back. As one article in The Diplomat summarized it, “Following the Korean War, South Koreans came to view the Americans as saviors, and the Americans’ religion, Christianity, as a source of strength and wealth.”

Not all Koreans feel this way, but Korean conservative Christianity and its anti-North Korea, pro-U.S. ideology has not faded.

“Having the talks at all is great. It’s about time. But how will it end? I just hope South Korea doesn’t get fooled by the North,” said Kim Jung-pil, a 78-year-old Christian priest from Gwangju. “South Korean people in general are very divided into two political sides: conservatives and the leftists. Among them, the conservatives are very concerned right now, while the leftists are optimistic.”

About 27.6 percent of the population identifies as Christian, according to 2015 numbers from the Korean Statistical Information Service. That’s much higher than the 15.5 percent of Buddhists (more than half of the country has no affiliation), despite the fact that the Korean peninsula has long been the host of Buddhist, Shamanist and Confucianist thinking.

Christianity arrived to the Korean peninsula long before the 19th century, but its miraculous growth really started in the 20th century. By the end of the 1900s, proselytizing Christian missionaries — particularly from the United States — built an estimated 293 schools and 40 universities on the Korean peninsula, including three of South Korea’s most elite universities today. During brutal Japanese rule of the Korean peninsula from 1910 to 1945, many of Korea’s most famous freedom fighters were Christian (so was the father of Kim Il Sung, North Korea’s first leader).

Then, after the Korean War devastated the nation, more Christian missionaries flocked to South Korea to provide aid and to evangelize. Some historians have begun calling the three-decade period from 1961 to 1990 the “the conversion boom.”

But even with a strong Christian foundation going into the 21st century, one of the biggest moments for conservative Christian visibility arrived in 2008 — when Hyundai CEO and devout Protestant Lee Myung-bak was elected as president.

All of this matters for a very simple reason: Religious divisions in South Korea not only complicate the country’s social issues, but also its stance on what to do about North Korea.

“As long as the U.S. is supporting this diplomatic outreach, a lot of the people on the right can’t come out and oppose it openly. The one entity they trust in all of this is the U.S. government,” said Peter Ward, a Seoul-based columnist at NK News and a former researcher at the Asan Institute for Policy Studies.

“But I’m sure they have their misgivings and are worried.”