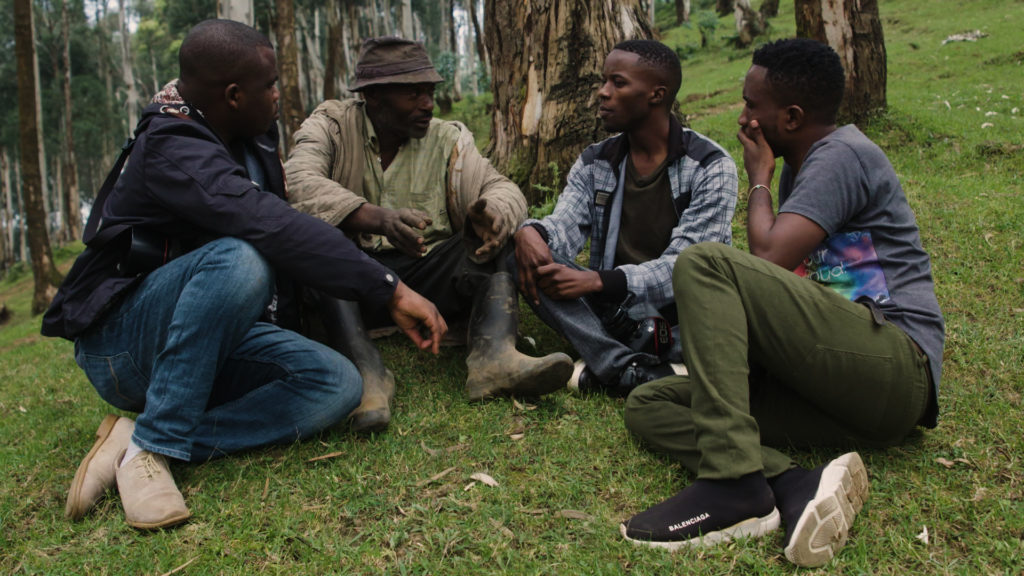 Imagine what it must be like to interview someone who committed genocide, even more so, after you lost your own family in that genocide. That was the challenge for Gadi Habumugisha, Bizimana Jean, and Mussa Uwitonze, three Rwandan storytellers orphaned by the mass slaughter of the Tutsi minority by the Hutu majority that started 25 years ago this week. More than 800,000 people were killed.

Their families were murdered in the genocide and they grew up at the Imbabazi Orphanage in northern Rwanda, where they had the chance to learn photography thanks to the nonprofit Through the Eyes of Children. It was an experience that changed their lives and put them on the path of becoming storytellers. The “Camera Kids,” as they are known, are now professional photographers and lead the organization, teaching vulnerable children around the world how to express themselves through a camera.

During the last 25 years, the Camera Kids often have wondered what made many Hutus, their countrymen, grab weapons and kill their Tutsi neighbors. After the genocide many of the perpetrators were convicted of their crimes and sentenced to prison. Now, as they are being released, the Camera Kids are photographing and interviewing them in an effort to understand the root of the genocide.

Recently, I spoke with the Camera Kids about the challenges they’ve found in planning and interviewing genocide perpetrators. Their experience yielded lessons that journalists and other storytellers can apply to their own interviews with people that have committed unspeakable crimes. Their responses were edited for length and clarity:

Establish a connection with the subject before the interview

The Camera Kids anticipated it would be hard to get their subjects to open up about their crimes. For most of the perpetrators, the genocide is history they would rather not delve into again. So the Camera Kids used their own experiences and connections to lay the foundation for their interviews. Bizimana began developing sources in the area where the orphanage is located and that familiarity paid off at the moment of requesting access: “We visited an area where we grew up. They know us very well, they know our orphanage,” said Gadi. “It’s a community where as kids, we used to go and take photographs, so they were open to us because they already knew us.”

This groundwork helped them even when they didn’t have a direct connection to the subject. “We didn’t know some of the perpetrators, because some were in prison serving their sentences, but their families knew us. So it wasn’t hard to open up to us because they had heard about us,” said Mussa.

They also enlisted the help of Inyenyeri Itazima, a Rwandan organization that promotes reconciliation between perpetrators and victims by helping locate subjects willing to talk and serving as a mediator. This provided a formal setting that made their subjects more at ease, they said.

Go beyond the testimony of your subject

The original idea for the project was very straight forward: interview the perpetrators to understand their motivations. But when the three genocide survivors approached their subjects, they realized that the story didn’t end with the perpetrators: “We didn’t know that their children were still living with them […] but we were curious to hear what the children think about what their father did, and how these children are perceived in society. It’s an aspect that made [the project] more interesting,” said Gadi.

The children’s perspectives gave the project a whole new dimension: Suddenly it wasn’t just about the genocide, but also about its legacy. This led the Camera Kids to also interview other victims, which offered another aspect they hadn’t considered before: how some victims had learned to coexist and forgive their attackers.

“During our conversation [with perpetrators] we captured the relationships before the genocide and their relationships now. They talked about how they tried to attack those families but also […] how they are forgiving each other now,” says Gadi.

Don’t be satisfied with the first answer you get

Regardless of how much research you have done beforehand and how well you establish trust with your subject, chances are that the first time you sit down for an interview, you won’t get the full story of their motivations and reasons to commit a crime. It takes time and patience to break that barrier and find deeper truths.

That is why the Camera Kids feel they only have scratched the surface with perpetrators and plan to continue with their work on this subject. “We sometimes asked the question: ‘Why did you kill your neighbor, someone you’ve shared meals, or went to the bar with,?’’’ said Mussa.  “Most of the answers were, ‘We were told to,’ ‘It was the government who forced us to kill,’” […] He said that to really understand how and why genocide perpetrators became perpetrators, the Camera Kids need more time, research and conversation.

“The advice I give young journalists is to never give up,” said Bizimana. “We’ve had this ideas in our minds for more than 10 years, but we only put them in action in 2019. It’s going to take time to find the answer,” he said.

It’s ok to cultivate empathy with your subject

Empathy doesn’t equal sympathy, particularly when interviewing those unrepentant of their crimes. In the case of the Camera Kids, their desire to understand the roots of the genocide and tell that story, helped them approach their subjects without prejudice: “For us working on a project interviewing people that commited crimes in a genocide that took our family members, hasn’t been easy, but because we think it is needed to be known by the world, we didn’t hold back. We decided to still do it, even if it’s difficult to talk about it,” said Gadi.

Developing that empathy also helped the Camera Kids connect with the perpetrator’s children. “We felt they’re like us, they went through the same things we went through as orphans. They were happy to have people that wanted to talk to them about these things. I feel that when they talked about it, they were able to heal, like we did,” said Mussa.

In the next year, the Camera Kids aim to interview more than 100 perpetrators, their families and victims, but they say they already have drawn an important lesson for their careers and their lives. “The experience can teach something to you too. For us, it was that anyone can forgive, ” Bizimana reflected. “There is no limit for forgiving.”