Interview: ‘The World Should Have Acted During Past Monkeypox Outbreaks in Africa’ 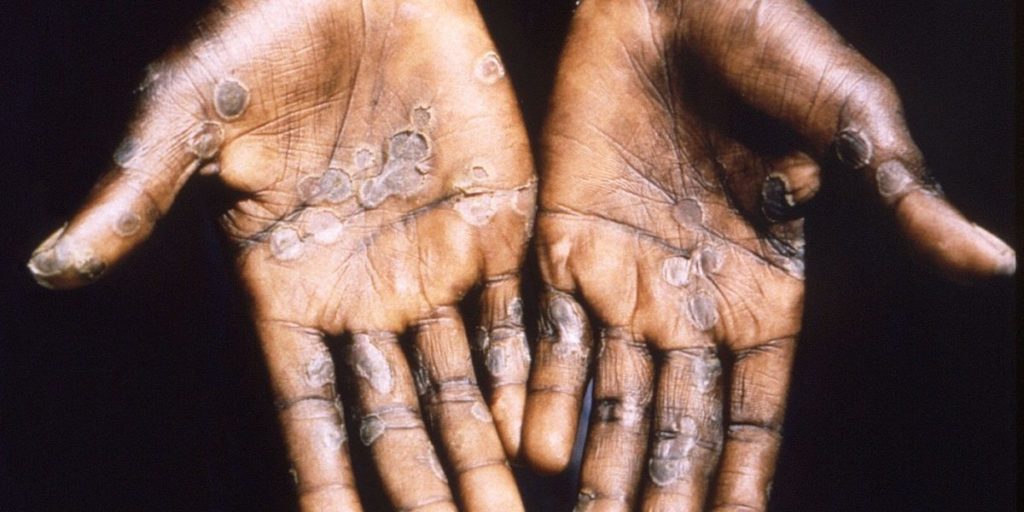 The palms of a monkeypox case patient from Lodja, a city located within the Katako-Kombe Health Zone, are seen during a health investigation in the Democratic Republic of Congo in 1997. (Photo by: Brian W.J. Mahy/CDC/Handout via Reuters)

New Delhi: As many as 108 monkeypox virus cases have been reported from 15 countries of Europe and North America as of the evening of May 22. The World Health Organisation (WHO) has issued two major statements in quick succession; this one on May 21 and this, on May 20, in which it warned more cases are to be expected as “surveillance expands”.

The genome sequencing results of some of the virus samples indicate that the virus has undergone 94 mutations. Some experts consider this a high number, especially since it is a DNA virus, which are usually considered to be stable. So, has a new variant of the virus appeared and could it be driving the rise in cases at a speed unheard of in its case?

The disease, before the 2022 outbreak, was already endemic (outbreaks were frequently happening) in West and Central African countries. But its outbreaks outside these regions used to be sporadic. So, what is driving the trajectory now, at this unprecedented speed, in other parts of the world? And what is the science behind this?

The Wire caught up, via email, with leading infectious diseases specialist and virologist at Emory University (Atlanta) Boghuma Kabisen Titanji on these and other issues related to monkeypox.

The interview is presented in full, with light edits for style and clarity. The questions are in bold and editor’s clarifications are enclosed in square brackets.

Though these are too early days to say, broadly speaking, what do you think might be responsible for the current uptick in monkeypox cases across so many countries?

I think, like with most outbreaks, this is a case of right timing and opportunity. We know that monkeypox has been circulating in West and Central Africa for a while now, with recent and ongoing outbreaks in Nigeria and the Democratic Republic of Congo (DRC). With the world beginning to reopen [after COVID-19 restrictions] and more people travelling and mixing, maybe [this] provided the right opportunity for the [monkeypox] virus to be introduced and to spread in non-endemic geographies [as well].

There is a view among a section of scientists that the mutations in the virus are responsible for the uptick since human-to-human transmission is not known to be this fast in this virus. Although genome sequencing results have indicated some mutations have taken place, they do not completely establish the case of a new variant. Do you think it is still a possibility?

I think this is unlikely. Viruses like opportunity and I think what we are seeing is a reflection of that. An introduction of monkeypox virus into susceptible populations with spread likely facilitated by optimal conditions that are just now being uncovered as outbreak investigation is ongoing.

We know some clusters have been linked to parties and shared public facilities (like saunas) in some European countries reporting cases. For a virus that spreads through close contact, these are all optimal settings for it to spread if introduced.

Some experts have also expressed apprehensions that there may be airborne transmission of the monkeypox virus and now the US-CDC also says it is ‘theoretically’ possible. What are your thoughts? If yes, how serious could this be?

With that said, the current situation is still quite different from a respiratory virus like COVID. Firstly, we already have a vaccine [against monkeypox] that is effective and can be used to prevent infections. And also, [it can] prevent progression to disease when administered as post-exposure prophylaxis [after onset of symptoms].

[The vaccine at the moment is currently in very limited supply. Even the WHO’s May 21 statement stressed this point].

We know that contact tracing, case identification and isolating identified cases is an effective way of breaking transmission chains. We need to give the ongoing outbreak the seriousness it deserves but also proactively utilise the tools already available to us to prevent it from spreading.

The fact that the incubation period is comparatively long (6-13 days), do you think the virus was in community transmission from quite some time ago; and it is only recently that we got to know?

Also, are there chances of asymptomatic transmission? [Long incubation periods mean it would take a longer time to disease to manifest in someone after being infected with virus]

Absolutely. One of the challenges with infections which have a long incubation period is that secondary transmissions can occur before people become symptomatic, making it easier for these pathogens to spread with stealth.

I think the spread of monkeypox has been ongoing for a while and only being picked up recently. Now that everyone is on alert and looking for it, we are likely to see even more cases reported in coming days and weeks.

Do you think the current rise in cases is also a result of the fact that the scientific community outside Africa, as well as policymakers, neglected monkeypox after the eradication of smallpox? There is scientific literature available where researchers had warned of an upsurge, but did we ignore all of that?

Yes I do think so, and sadly, the same is true for many other infectious pathogens with outbreak potential.

The previous outbreaks [of monkeypox], which have mostly happened in Africa, largely went ignored by the news media and the scientific community. This, despite monkeypox outbreaks happening with increasing frequency in recent years. I think there were missed opportunities to take this threat seriously and to act pre-emptively.

Vaccinations [against monkeypox] could have been restarted in communities with the highest risk of outbreaks from spill-over events [jump over of the virus from animals to humans]. Better surveillance could have been put in place. More investment could have been poured into developing new antivirals and stockpiling vaccines. There are a lot of things that could have been done to prepare for the eventuality of a larger outbreak involving multiple countries, like the one we are seeing now.

Finally, how do you think this outbreak might behave in weeks to come. Do you apprehend major outbreaks, not necessarily on the lines of Covid-19 though? And what is your advice to countries, especially like India, where no case has been detected yet?

I think we will see more cases being reported and the outbreak may extend to involve even more countries than we know currently. Viruses are always a few steps ahead in outbreaks and we need to bear this in mind and plan accordingly. I think it is important for the general public to be educated on what monkeypox is and how it spreads and to be encouraged to report if they notice any concerning symptoms.

Public health authorities, even in countries which have not yet reported cases, need to maintain a high index of suspicion, educate clinicians and communities to be on the lookout so any new cases and transmission chains can be identified.