Inside the Winter of Discontent for India’s Gig Workers 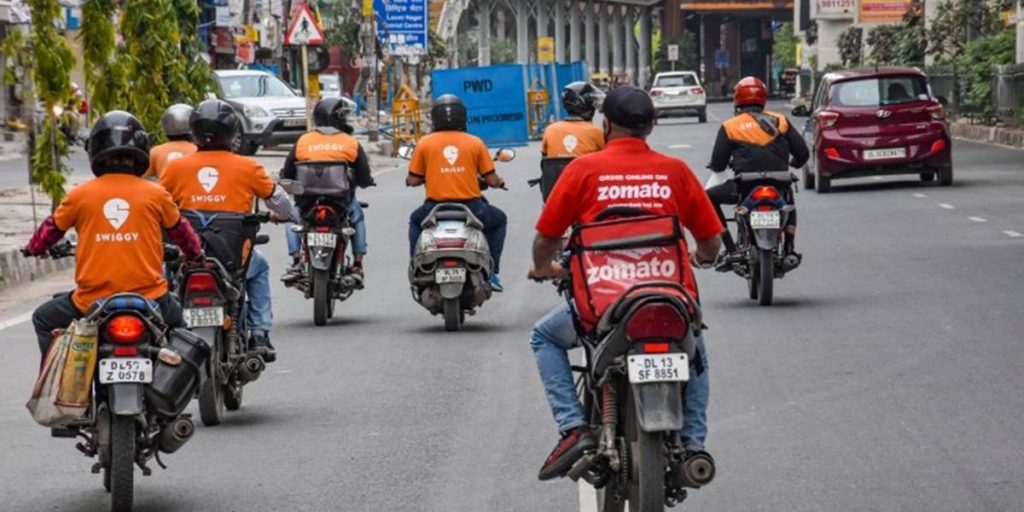 A photo of Swiggy and Zomato delivery workers. (Photo by: PTI)

There is a storm of discontent brewing within India’s app-based worker community, which the Union government has been sidelining for far too long much to the dismay of the over 15 million gig workers in India.

While the government persists with an apathetic attitude that alienates gig workers – those working for Uber, Ola, Zomato, Swiggy, Urban Company and a host of other apps – their well-being is left at the mercy of a few private companies keen on cutting down cost sub-heads and keeping their obligations to those working on their behalf to the bare minimum.

The living and working conditions of these workers are a testament to how thousands of drivers and delivery workers are forced to compromise with their physical and mental health in order to eke out a barely sustainable wage.

Between July to November 2019, the Indian Federation of App-based Transport workers (IFAT) and the International Transport Workers’ Federation (ITF) spoke to 2,128 respondents across 6 cities to assess the working conditions of Ola and Uber drivers. Their findings:

2) Backache, constipation, liver issues, waist pain and neck pain are the top five health ailments that app-based transport workers suffer as a consequence of their work. 60.7% of respondents identified backache as a major health issue.

3) There is a complete absence of social security and protection – a glaring 95.3% claimed to have no form of insurance, accidental, health or medical. This reflects the inability of workers to invest in their health.

The condition of Zomato and Swiggy workers is no better. In the Fairwork India Ratings for the year 2020, Zomato and Swiggy were ranked at the very bottom of 11 platforms that offer “work on-demand via apps”. The project which ranked the platforms on the basis of five criteria, namely, fair pay, fair conditions, fair contracts, fair management and fair representation put the spotlight on a host of problems bedevilling gig workers in the country.

Over the years, not only has the incentive structure of the food delivery apps become less favourable to the workers but they are now forced to log in more hours for a sustainable income. Things are compounded further when one brings into the picture the minutiae of technical glitches which scuttle on-time deliveries but the blame for which is squarely put on the delivery executive and not the software.

In a research study conducted by the School of Public Policy and Governance under the aegis of TISS Hyderabad, it was found that close to 60% of the respondents interviewed had worked seven days a week. Forty-seven percent of those interviewed in the full-time category worked for more than 12 hours a day and 18% from the full-time category worked above 15 hours per day. Forty-two percent of the respondents who worked part-time worked above 12 hours a day.

These findings are mirrored by the Fairworks India Ratings report as well, which states:

“…Workers work unpredictable and long hours to achieve an income that can sustain them. Most workers interviewed worked much longer than the legally permissible 48 hour week (without overtime wages). Moreover, these hours were not always predictable and could also involve long periods of waiting between orders (for which they were not paid).”

The report also sheds a light on how gig workers are left in the cold when it comes to redressal of their grievances.

“Workers from the other four platforms (namely Ola, Swiggy, Uber and Zomato) were increasingly dissatisfied with the communication channels made available to them. The helpline numbers provided were either unresponsive most of the time or had premeditated responses. Workers on these platforms added that ID blocks without warning were frequent and that there was no documented process to appeal when they were blocked. Workers also complained that they had to report the block at the platform hub in order to be unblocked, which effectively meant losing out on daily earnings and daily/weekly incentives.”

In the Fairworks India Ratings for the year 2021, Swiggy and Zomato have both received better ratings compared to the previous years. As per the 2021 report, Swiggy will revamp its delivery partner system interface to improve the ease of raising and tracking tickets and will deploy these policies by March 2022. Zomato will update its training material to make workers more aware of their ability to dispute penalties, and the mechanisms to do so.

Ola and Uber have both been ranked at the very bottom of the 2021 rankings. Both of them scored a zero out of 10.

Where’s the insurance cover for the gig worker?

A preponderant majority of gig workers have been operating without the safety net of health insurance both before and after the pandemic.

As the country went into the first lockdown, gig workers, for the lack of a minimum wage guarantee were forced to go out and work. Gig workers, per force, had to embrace danger to life and limb in order to earn a sustainable wage even when the COVID-19 infection cycle was raging across India. This is evident from the fact that an IFAT survey found that 95.3% of the app-based workers did not have any health insurance. An absence of a health insurance forces the gig worker to de-prioritise health expenditure unless it assumes peak priority.

A precipitous fall in income coupled with ballooning medical expenses – either for self or for family – has led to a grim situation where many platform workers find themselves in debt traps. As per an IFAT survey, platform workers who have had the misfortune of suffering through COVID-19, on an average, spent Rs 40,000 to Rs 60,000 for their treatment. Their survey also revealed that about 25.3% of the surveyed persons, who tested positive for COVID-19 were without any work.

Majority of the gig workers are forced to work with platform companies considering the lack of suitable employment avenues in other spaces. In order to carry out their daily work, they need vehicles and many of them have no option but to raise the amount via bank loans. With bank loans come the burden of EMIs. Given the damaging overhang of the first and the second lockdown and the contraction in demand, monthly incomes of these workers tanked. This made discharging the loan all the more troublesome and led to wide-spread instances of loan and recovery agents harassing and bully gig workers for loan repayment.

As per IFAT surveys, 65.7% of persons who had taken loans, had to take another loan to pay the earlier loans. Nearly 64% of the surveyed persons who have taken loans, claim to be paying close to Rs 15,000 a month, even during the pandemic. More data collected from the ground reveals that 52.2% of the surveyed persons have taken loans and are earning Rs 5,000 or less in a month, and are still being charged with an EMI in the range of Rs 10,000 to Rs 15,000. A large number of those surveyed have also stated that since they have not been able to pay EMI installments, they are now being constantly harassed by loan recovery agents.

The abandonment of the gig worker

A brief walk through the history of the gig economy in India shows that the government, as well as the companies, have largely eschewed their responsibilities and commitments to the community of gig workers. Currently, the legislative framework is such that platform workers find themselves in a grey area, where they have no access to social security.

In a PIL filed by the IFAT workers in the Supreme Court, the union has been raising the argument that gig workers are in an employment relationship with the aggregator companies, and consequently come within the definition of ‘workman’ under different social security legislation including a number of labour laws. Meanwhile, app companies have been contradicting this point, tooth and nail. The dynamic that they have been advocating – and would prefer for it to have wider acceptance – is that there is no employment contract that exists between the companies and those that work for them. Those individuals who work with them are posited as “partners”, and not as employees.

As per the PIL, both Uber and Ola have updated their service agreements for their riders as well as their drivers to absolve themselves of all liabilities and responsibilities towards the two parties. This is evident from Uber’s recent decision to stop using the term “partner” in its agreement and instead replace it with the term “customers” even for those individuals who now use their app for commercial gains. Meanwhile, the drivers have no option but to sign on the dotted line.

Shaik Salauddin, the national general secretary of IFAT told The Wire that millions of gig workers across India have been represented and their grievances have been voiced in the PIL filed by the organisation. “We are hopeful that our struggle, our problems will be heard thoroughly by the Supreme Court judges. What we have demanded is nothing out of the ordinary. What we are demanding in the PIL is part of our rights under the existing law, and the law should be implemented as soon as possible.”

Time for India to evolve

In the UK, France and Netherlands, gig workers are now categorised as “workers” and have access to social security benefits. In August this year, the Union government launched the e-Shram portal, which took a seminal step towards the creation of a national database of unorganised workers. As of December 14 this year, a total of 7,27,921 individuals were registered as gig workers on the portal. However, setting up the e-Shram portal is only a halfway-house to letting gig workers have true and substantial access to social security measures. Additionally, the Social Security code falls short when it comes to ensuring the holistic welfare of workers.

Currently, the code does not provide any social security to the workers but states that the Union government or the state government can formulate schemes on benefits like health and maternity benefits, life and disability cover, old age protection, education allowance.

While the Union government refuses to get its act together on the implementation of the code provisions that relate to gig and platform workers, how long are these workers destined to suffer in a grey, unsupervised zone? The IFAT PIL argues that while the Social Security code is not being enforced, gig workers should have access to benefits under the aegis of the ‘Unorganised Workers’ Social Welfare Security Act, 2008.

Meanwhile, the Social Security code proposes that companies utilising the services of gig workers will have to allocate 1-2% of their annual turnover or 5% of the wages disbursed to platform workers, whichever is lower, to a social security fund. The Union and state governments will also be able to contribute to these funds. Question is when will this provision – albeit woefully short when it comes to ensuring comprehensive social security for gig workers – be implemented?