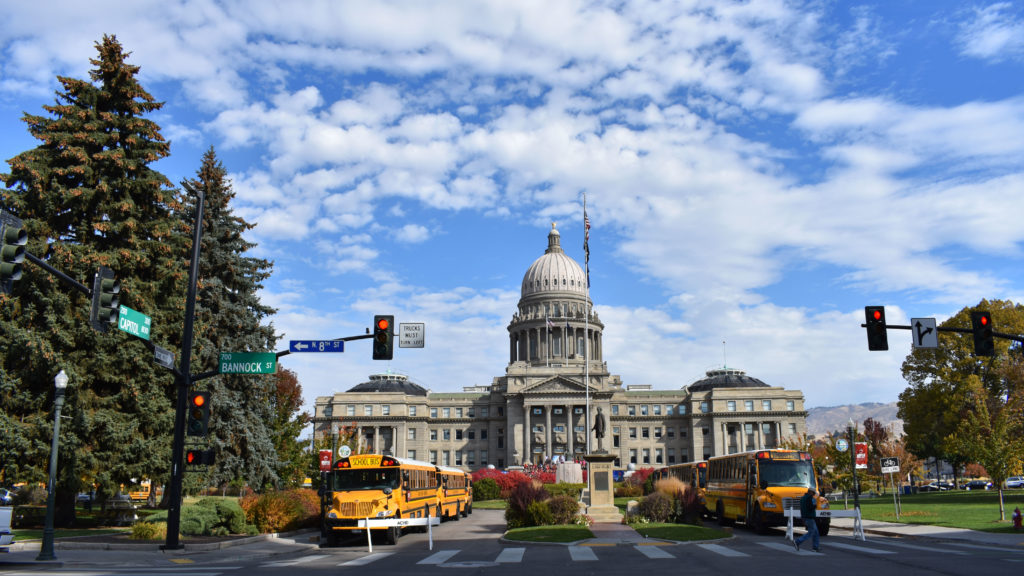 School buses parked outside the Idaho State Capitol Building in Boise, Idaho, where inside, legislators have battled over climate change education. (Photo by Tamanoeconomico)

What schools should teach kids about climate change – or whether to teach it at all – has become hotly disputed in at least a dozen states. But rarely has that debate been more contentious or long-lasting than in Idaho.

For three years, local educators and scientists lobbied conservative lawmakers to include climate change in Idaho’s academic standards — the rules that prescribe what students must learn each year in school. Their efforts worked: The subject was added to middle and high-school science courses last year.

But just as educators began to amend their school lessons, lawmakers pulled a dramatic and unprecedented political maneuver that has reinvigorated the debate. Motivated by frustration over a number of recent controversies, legislators earlier this year chose not to renew Idaho’s 8,000 pages of rules and regulations, which are typically renewed annually as a matter of course. In doing so, they resurrected a slew of hot-button issues that had previously been resolved — including the science standards.

“I am flabbergasted. We have beat these standards to death,” said Scott Cook, the former director of academics for Idaho’s Department of Education who ushered the climate standards into state law. “This is like a zombie approach to educational policy. It’s wasting time and damaging kids’ educational lives.”

Scientific consensus that humans are causing global warming is estimated to have passed 99 percent, but classrooms remain caught in the political crossfire surrounding the subject, as FRONTLINE and The GroundTruth Project have been reporting over the last two years. Globally, youth activists have been campaigning for action to slow the crisis that is shaping their lives. And yet, in Arizona, educators last year fought off a proposal to remove mention of climate change from science standards. Alabama and Indiana have passed resolutions attempting to protect science teachers who present differing positions on controversial subjects. In Florida, a 2017 law allowing residents to oppose classroom materials they dislike has been used to challenge textbooks that discuss recent climate change.

Idaho’s political conflict over climate education began after the state’s education department convened a committee of educators for a routine update of the science standards in 2015. Although standards are an arcane aspect of public education, research suggests they have a powerful impact on what children learn. In a national survey released last year, 84 percent of middle and high-school science teachers interviewed agreed with the statement that “most teachers in this school teach to the state standards.”

After months of drafting and reviews, the Idaho committee proposed standards adapted from the Next Generation Science Standards, a widely adopted national model, laying out what students should learn about science — from the four seasons in kindergarten to Coulomb’s law in high-school physics.

But when their proposal landed in the state legislature’s 2016 session for approval, it met immediate blockades. The education committees in both the Idaho House and Senate rejected the standards, saying they wanted more public input. At the time, state Republican Rep. Lance Clow specifically took issue with language saying that human activity has “significantly” impacted the biosphere.

“It’s not so much that they say humans may contribute, it was that they said humans were the primary cause,” Clow explained in a recent interview with FRONTLINE/The GroundTruth Project. “Students should be taught about all the contributing factors, and not have a conclusion built into the standards.”

The educators reconvened. After gathering more public input, they made minor revisions to some standards but refused to remove the ones on human-caused climate change. In the 2017 legislative session, the education committees in both chambers approved the vast majority of the standards, but rejected the five paragraphs that referred to the human impact on climate change.

“I just had a problem with the way they were force-feeding stuff that was not absolutely certain,” said Rep. Ryan Kerby, a Republican and vice chair on the state’s House Education Committee, explaining his 2017 vote to FRONTLINE/The GroundTruth Project. “Have some fun debating it in class, but not just teaching as fact things that are debatable.”

Students, parents and educators across the state wrote letters and spoke up in hearings in favor of standards that reflect the scientific consensus. High-school science teacher Jenna Raino argued that “students need to know about climate change so they can make the appropriate choices in their life.” Raino taught in a rural district where climate change was unlikely to be added to the curriculum if it wasn’t mandated by the state, “which means that if I teach about climate change – even in a fair & balanced manner – I am at risk,” she wrote in April 2017.

Raino’s remarks counted among more than 1,000 public comments on the standards; less than 1 percent of them supported the lawmakers’ decision.

Yet in 2018, the House once again rejected a portion of the climate standards, arguing that “conclusions” about climate change didn’t belong in Idaho’s science classrooms. Public pressure, however, had worn on establishment Republicans in the Senate, and under the watch of national media, the state’s Senate Education Committee voted 6-3 to leave human-caused climate change intact. In Idaho, bills must have both chambers’ approval before becoming law, but administrative rules – including educational standards – only need one chamber’s approval to be added to the code, so the standards took effect despite the House’s rejection. At least for the moment.

The one-chamber approval system for regulation has long plagued ultra-conservative lawmakers in Idaho’s House, who have seen a number of rules they disapprove of pass into the state administrative code. As the 2019 legislative session was coming to a close in April, those members demanded an overhaul requiring both chambers’ approval for rules. When this effort failed, they made the extraordinary choice to kill a routine bill that would have reauthorized all 8,334 pages of Idaho’s administrative code. As a result, the rules governing everything from traffic violations to dental licensure expired on June 30 – among them, the state’s academic standards.

According to Cook, the former state academics director, the government “does not function” without an administrative code.

“That’s how crazy what they did was – they basically [threatened to] shut the government down because they wanted carte blanche to go after anything it does that they don’t like,” he said.

As a stop-gap, Gov. Brad Little, a Republican, used his executive authority to reinstate the code, but could only do so only on a temporary basis, allowing the laws to be extended for a year. But temporary rules objected to by the public must be given a hearing. State agencies received thousands of public comments about a variety of rules, necessitating dozens of public hearings across the state.

When the legislature reconvenes in January, state lawmakers will have the opportunity to relitigate an array of controversies that were once considered resolved, including a rule allowing transgender people to alter their birth certificates, state requirements for childhood vaccines, and, of course, education standards on climate change.

In late August, teacher Raino once again provided public comment on climate change, as one of dozens to speak at a public hearing on the expired education code – including the science standards – in Nampa, Idaho. She started her comments by asking all the teachers in the room to raise their hands.

“Over half the room taught the first day of school today,” she said. “We’re exhausted and we care about these students. We cared enough to show up today.”

Among those who submitted public comment in favor of changing the standards was Republican Rep. Tammy Nichols. She argued the standards promote “man-made global warming as irrefutable science.” In a recent email, Nichols said that “if the issue arises” in the next legislative session, which begins next month, she “certainly would not hesitate to take the opportunity to” address it.

Clow, who is now the chairman of the House Education Committee, said he expects the subject will once again be considered by his committee.

“I anticipate that when we go through the process of reviewing all the rules, there will be questions from members of the committee addressing some of the challenges they had previously with the standards, including some of this explanatory language on climate change,” Clow said. “Whether or not it rises to an issue that would cause the House Committee to reject those five paragraphs again, I don’t know.”

Even if the state were to reverse itself on climate change in schools, the subject will remain in some teachers’ lesson plans: Science standards provide a base level of what must be taught in classrooms, but teachers are given latitude to expand beyond them. Middle-school science teacher Nate Dean began incorporating the human contribution to climate change into his lessons long before it was included in Idaho’s standards.

“I don’t really think you can teach Earth science without what is going on with the Earth’s climate,” Dean said. “I don’t really view it as an optional or debatable thing.”

On a brisk April morning at Boise’s Fairmont Junior High, Dean began his lesson by showing a 2018 interview with President Donald Trump about climate change. Before starting the video, he warned the class to put all political opinions aside. After watching the short clip, students compared Trump’s statements to information from the National Oceanic and Atmospheric Administration. Some of Trump’s statements aligned with the federal agency’s data, while others diverged radically.

If Dean were to receive complaints from students, parents or school officials about the lesson, he could point to the standards that — for now — mandate education about climate science in his class. He doesn’t anticipate a conflict in relatively left-leaning Boise.

But fear of reprisal is not rare among teachers who brave politically controversial subjects. About one in five science teachers described community resistance to teaching “controversial” issues in science as a moderate or major problem, in a 2018 national survey. Madeleine Banta, a student teacher in Boise School District, has submitted public comment in support of the climate standards, but says she frets about teaching the subject.

“I especially worry about parents believing that I am politicizing rather than educating their children,” she said. “I have not had any colleagues that have been against it, but I have talked to some who don’t teach it explicitly out of that same fear.”

The renewed debate is also bewildering for districts, many of which are in the midst of training their teachers in the new standards, said Marilyn Whitney, Idaho’s deputy superintendent of education.

“We are just going to have to let the process play out and see if we can come to a point where we are not potentially throwing our school districts into uncertainty about how they should be conducting their class,” she said.

She and many others in the education community will be watching the legislature’s next move on the issue in the 2020 session. Teacher Raino, speaking at the hearing over the summer, said the outcome could even cause her to reconsider her decision to teach in Idaho.

“I’m so excited this year because I finally feel like I have a handle on my curriculum in my class,” she said. “Then, I hear we are thinking about getting rid of them. It frustrates me. … I’m planning on staying in Idaho, but if we keep moving the goalposts, maybe not.”

A version of this story also appeared on FRONTLINE on December 20, 2019