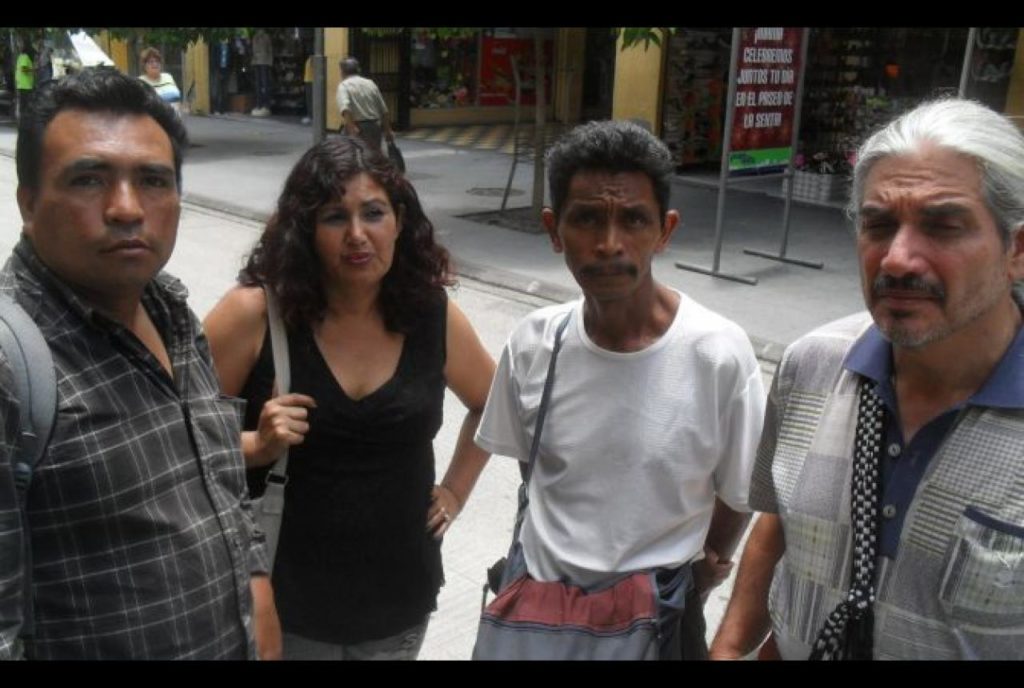 Guatemalan street workers, who say they pay no income taxes but also have no pension or health insurance. - ((John Otis / GlobalPost))

GUATEMALA CITY, Guatemala — Suleima Ojer has worked full time since she was 11.

To help support her family in rural Guatemala, Ojer dropped out of elementary school to pick coffee beans. Later, she moved to Guatemala City where she worked 14-hour days cleaning houses for half the country’s minimum wage.

Now, after 44 years of ignominious labor, Ojer has no savings, no health care, and no pension. Retirement seems like a distant fantasy. In Guatemala, said Ojer, who is 55, “you have to work until you no longer have the strength to work.”

Like Ojer, an astounding 75 percent of Guatemalan workers toil in the so-called informal economy. They are often self-employed or work at odd jobs that are untaxed and unmonitored by the state, also referred to as the underemployed.

But no matter the moniker, these workers nearly always lack government protections and benefits available to salaried, punch-the-clock employees — such as minimum wage, regulated hours, insurance, pensions, and the right to join unions and collectively bargain with employers.

Guatemala has one of the world’s highest rates of informal employment. But throughout Latin America, Africa and Asia, unregistered workers and businesses are ubiquitous. According to the World Bank, informal employment comprises half to three-quarters of all non-farm jobs in developing countries.

To some, these workers stand as an inspiring testament to the entrepreneurial spirit and the will to survive and prosper. However, armies of street venders and rows of improvised mom-and-pop stores also signal economic backwardness, said Michel Andrade, a labor analyst at the Guatemala City think tank Asies.

This lack of mobility is tied to a dearth of credit. Informal workers rarely hold legal property titles that could be used as collateral for small-business loans that might allow them to expand and hire more workers.

“Informality is a trap because it prevents the emergence of a dynamic economy,” Andrade said. “It allows people to survive but nothing more.”

When the phenomenon was first studied in the 1950s, analysts predicted that informal workers would transition to formal jobs as economies advanced.

But for a number of reasons, these extra-legal laborers have become a permanent fixture in economies saddled with a massive influx of unskilled laborers migrating from the countryside into cities.

In many cases, government red tape can practically force people and businesses to stay informal.

In one widely noted experiment in the late 1980s, Peruvian economist Hernando De Soto tried to legalize a small, one-employee garment shop on the outskirts of Lima. His team began making bus trips into central Lima, standing in line and filling out forms to secure the required licenses and certifications. They finally registered the business after working full time for 289 days at a cost of $1,231 – which was 31 times the monthly minimum wage.

“Inevitably,” De Soto later wrote, workers and small business owners “do not so much break the law as the law breaks them – and they opt out of the system.”

Even when workers have the chance to join the system, some refuse because it means paying taxes in exchange for watered-down benefits, such as access to public hospitals that lack antibiotics or a minuscule monthly pension checks.

Many government officials view the informal economy as a useful escape valve that relieves some of the pressure on them to create good jobs. What’s more, some economies are based on environments in which labor rights are almost nonexistent.

In Guatemala, for example, some highly regarded agribusinesses rely on informal workers, including children, according to Alejandro Argueta, a Guatemala labor lawyer.

“The logic of the economic system in this country is precisely to deny workers their rights and to maintain informality,” Argueta said.

He added that because legions of underemployed people are clamoring to replace them, salaried workers in Guatemala tend to be more docile and are less likely to push for better wages and benefits out of fear of angering their bosses. It’s no wonder, he said, that only 3 percent of the country’s formal labor force belongs to unions.

However, labor rights advocates argue that the difficulties in bringing more people into formal employment in developing countries hardly justify throwing in the towel. They claim that improved tax collection can lead to better government services and convince people of the benefits of formality.

In the United States, tax revenues represent about 25 percent of gross domestic product. That helps underwrite decent public services and social security. But in Guatemala, where the informal economy reigns, tax receipts make up just 11 percent of GDP, which helps explain the dismal state of public hospitals and schools and tiny pension payments, according to Carlos Gonzalez, a former director of the country’s central bank.

Rather than reforming their tax codes and social security systems, however, many countries — including Brazil, Mexico and Guatemala — sometimes encourage informality.

This can happen through the use of so-called conditional cash transfers to poor people who agree to keep their kids in school and provide them with regular medical checkups.

These programs have helped reduce poverty and inequality, but they have not led to more formal employment, according to Carola Pessino, a visiting fellow at the Center for Global Development in Washington.

Although some workers prefer the freedom of self-employment, critics contend that it’s misleading to describe the masses of informal laborers as glorious manifestations of the free market.

“Construction workers, housekeepers, and market venders are not talking about how great it is to be liberated from the pressures of taxation,” said Alexis de Simone of the AFL-CIO’s Solidarity Center which works to improve labor conditions overseas. “They want the protections that formal workers count on, like health insurance”

Take Jorge Peralta, 39, who sells homemade jewelry on the streets of Guatemala City and earns about $10 a day. He’s been struggling to pay off stacks of medical bills following his father’s lengthy illness and death in February. Neither Peralta nor his father, a street vender who retired with no savings, was affiliated with the social security system.

“My father died without health care or a pension, and I’m going down that very same path,” Peralta lamented as he sat in a park where fellow venders sold candy and pastries and a wild-eyed man performed magic tricks before passing the hat.

Street venders, at least, can set their own hours. That’s not the case for domestic workers who as full-time employees within households should be entitled to social security and other benefits. But in Guatemala, their working conditions are horrendous. Many earn $30 for a 70-hour work week.

The domestic worker Ojer recalled working in houses where she had to take cold showers and fend off sexual attacks by her male bosses. Her friend and fellow domestic worker, Ana Jiménez, said the families she worked for fed her scraps like chicken necks.

Part of the problem is that there’s no respect for the job within society.

Household work was historically performed by slaves while today it is often handled by impoverished women and migrants. Labor inspections within private homes rarely happen, so employers have wide leeway in setting hours and wages, de Simone said.

But domestic workers are fighting back. Ojer and Jiménez have joined Atrahdom, one of several organizations that have sprung up across Latin America to lobby for better working conditions for domestic employees.

These groups were a driving force behind the approval last year of a landmark convention on behalf of domestic workers by the International Labor Organization, a UN agency based in Geneva. It calls on governments around the world to provide domestic workers with the right to at least one full day of rest per week, limit working hours for underage workers, and offer collective bargaining rights.

But the ILO has no enforcement power. Indeed, Guatemalan lawmakers — nearly all of whom employ their own domestic workers — have refused to consider legislation that would turn the ILO principles into law.

“Guatemala has ratified a lot of international conventions,” Carlos Ulban, the country’s deputy labor minister, told GlobalPost. But over the years, he admitted, successive governments “have ignored labor issues.”

A voluntary program to register 10,000 domestic workers for social security was set up two years ago in Guatemala City. But only 326 people have signed up because many potential beneficiaries either don’t know about the program or fear they will be fired if they join, according Maritza Velásquez, the director of Atrahdom.

Even so, Atrahdom members like Ojer and Jiménez take to the streets several times a week to track down domestic workers and tell them about the program.

“This won’t make much difference for me,” said Jiménez, who is in her 50s. “But I’m doing this for future generations.”