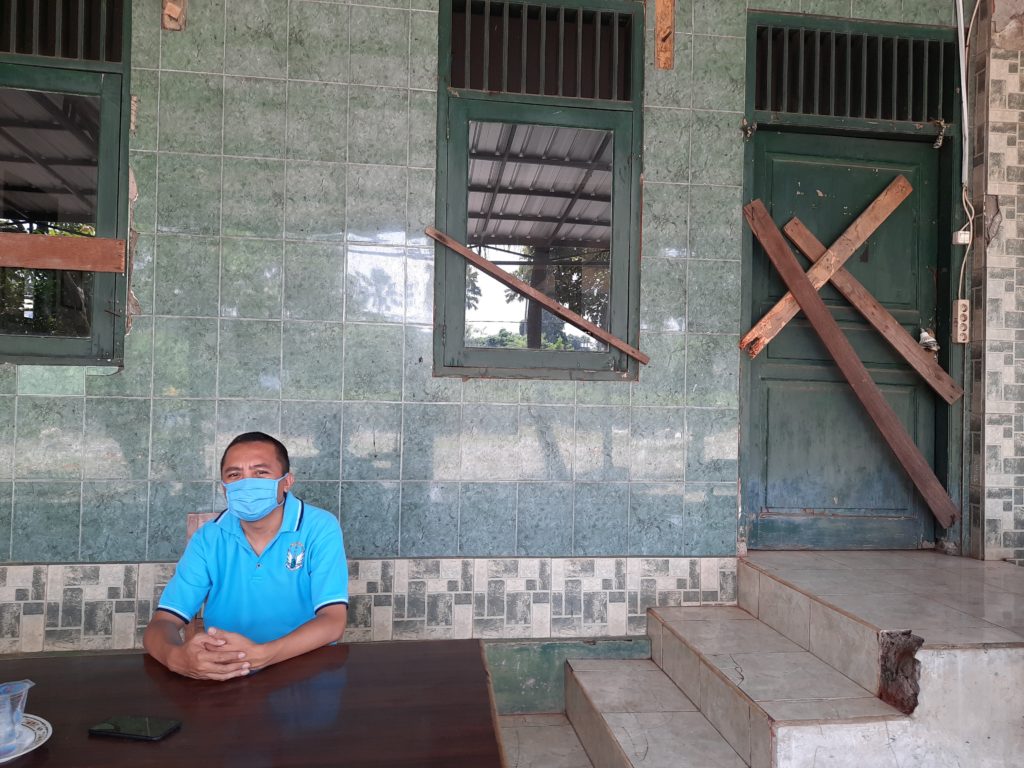 Abdul Hafiz, a preacher for the Ahmadiyya community, standing in front of the mosque that has been sealed off by authorities. (Photo by Ahmad Pathoni/GroundTruth)

DEPOK, Indonesia (RNS) — During the fasting month of Ramadan, which begins this week, Muslims in this mostly Muslim country are accustomed to spending more time at mosques, iftar gatherings with friends and other, more casual social gatherings.

But this year, with more deaths from COVID-19 than any Asian country outside China, there will be no in-person evening prayers in Indonesia, no merry breaking of fasts at day’s end or travelers arriving home at the end of the holy month to celebrate the festival of Eid al-Fitr, as Indonesians keep to themselves to help curb the spread of the disease.

Authorities in the country’s biggest metropolis — Jakarta, home to 30 million people — and across the nation that is home to 12% of the world’s Muslims have ordered places of worship, schools and nonessential businesses to close temporarily.

The Indonesian Council of Ulema, or MUI, has followed with a fatwa, or clerical ruling, that calls on Muslims not to perform Friday prayers and other congregation activities in mosques during the pandemic, instead urging the faithful to conduct Ramadan evening prayers at home.

“Performing prayers at home won’t reduce the value of our devotion to God,” said Asrorun Ni’am, secretary of MUI’s fatwa commission, last week. “Just staying at home to avoid spreading the virus or being exposed to the virus is considered a religious duty at a time like this.”

Ni’am said the pandemic was an opportunity for Muslims to strengthen their faith and family bonds. “We can turn our home into the center of worship. We pray together and share iftar meals with our family,” he said.

“Post-Ramadan gatherings can be conducted via social media or call/video conferences,” said the circular.

The council also said that traveling while knowing that one could be carrying the virus is a sin.

While the edicts have not been universally followed — hundreds of members of the international Islamic missionary group Tablighi Jamaat have been quarantined at two Jakarta mosques, after some worshippers tested positive for COVID-19 — many Indonesians are accepting the curtailed Ramadan as fate.

“We have no other choice but to pray at home. Praying together in a mosque is religiously preferable, but I’m sure God will understand,” said Arie Gustian, a 27-year-old member of a mosque in Bogor, West Java. “We have to obey our government, because it’s for our own good.”

Gustian said he will be the only one who fasts in the house because his wife is pregnant, and he will be doing so while worrying about the security of his job.

Finance Minister Sri Mulyani Indrawati said Friday (April 17) that more than 1.4 million workers had been furloughed or laid off and the government has warned that 5.2 million could lose their jobs.

Renaldi Adri Rimbatara, a 32-year-old father of two who lives in Bogor, fears for his future as the pandemic has forced him to temporarily close his small printing shop.

Rimbatara said he will keep his iftar feast simple this year.

“I don’t know if I can continue to put food on the table if this situation persists,” he said.

Even those who continue to work expect a somber Ramadan. Diana Marsella, a 33-year-old software engineer in Jakarta, has worked from home for a month and said she’s not worried that fasting will make her susceptible to contracting the virus. “We’ll just have to consume more health supplements and eat a lot more fruit and vegetables,” she said.

But she said the confinement would surely make days feel longer. “Ramadan is a time of joy and people spend a lot of time outside praying, meeting friends and even eating suhoor (pre-dawn meals) outside,” she said. “This time it will not be like that.”

For members of the persecuted Ahmadiyya Muslim community, the restrictions to defend against COVID-19 will make this Ramadan doubly difficult. Indonesia’s council of Muslim scholars has declared the teachings of the sect, founded in 1889 by Indian Muslim scholar Mirza Ghulam Ahmad, to be deviant.

The Ahmadiyya, who number about 400,000 in Indonesia, have been targets of attacks by Muslim extremists since at least 2005, when the MUI issued a fatwa declaring that anyone who follows its teachings is no longer Muslim. In 2011, hundreds of machete-wielding residents attacked a house in the Pandeglang district in Banten province, west of Jakarta, killing three Ahmadis.

“It’s like we are at war with two kinds of virus – the coronavirus and the virus of intolerance,” said Abdul Hafiz, a preacher at the Ahmadiyya community’s headquarters in Depok, south of Jakarta.

The mosque in Depok has been sealed off for years, its front door blocked by wooden bars. A sign plastered on the door declares that the building has been closed by the city. Worshippers have been forced to perform congregation prayers in the courtyard outside the mosques.

But Hafiz said their predicaments would not stop the dozen or so Ahmadis at the mosque from worshipping during Ramadan, or carrying out charitable activities, while observing social distancing measures and obeying restrictions imposed by the government.

“During Ramadan, we usually distribute iftar meals to the needy, attend iftar gatherings and perform congregation taraweeh (evening) prayers,” Hafiz said. “This year we will do whatever the authorities tell us to do. But of course as social beings, we have an obligation to help each other and we will continue to do that despite the limitations.”