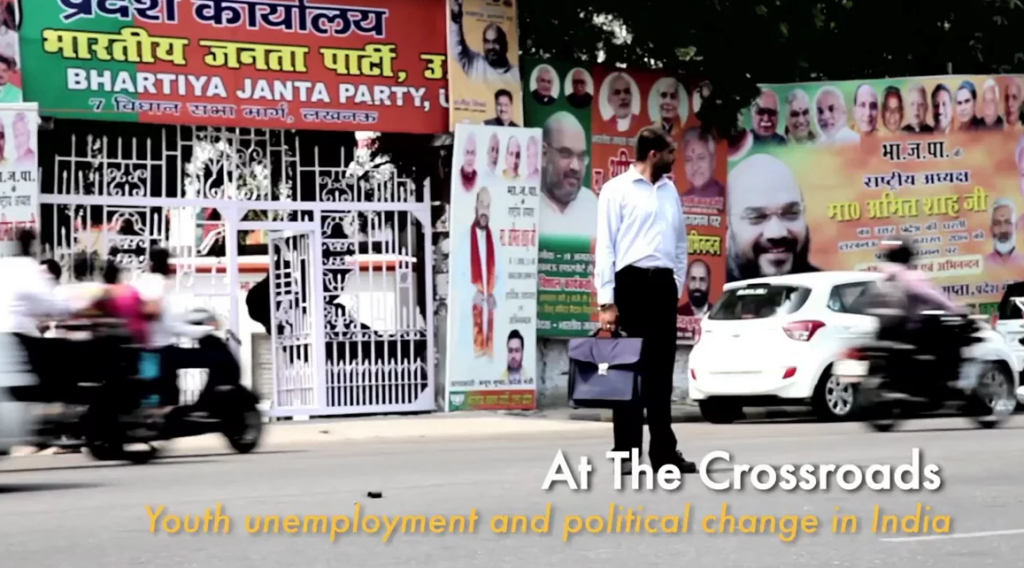 By Gayathri Vaidyanathan and Pracheta Sharma

SANGRUR, India — Two years ago, Gagandeep Singh woke each morning to the sound of his mother nagging him to find a real job.

He had graduated in 2011 with a bachelor’s degree in technology from Lovely Professional University in the state of Punjab, then gotten a job at a call center that paid the equivalent of $85 per month. His income barely covered his day-to-day expenses.

So he quit his job, moved to Singapore with help from his parents, and pursued a master’s degree in hotel management. Working as a cashier at an Indian food stall in a food court near the city’s airport, he roomed in apartment with 15 other young men, all from Punjab, and began to recognize the plight of the Punjabi diaspora working abroad.

“It was a really difficult life and there was hardly any place in the house,” he said. “And to think of it, we were lucky — other houses had 20 or more people cramped into a similar space.”

It was not until he returned home in September 2013 that his life truly changed, Singh said. He had become angry at the lack of opportunity in India and blamed it on shoddy government policies on job growth. So, he decided to do something to help make a change.

He attended a press conference hosted by Bhagawant Mann, a popular comedian-turned-politician who was running for parliament. Singh volunteered his services as a personal assistant. Mann, a handsome, charismatic leader who makes people go starry-eyed in his vicinity, accepted. The post is entirely unpaid.

Singh is part of an influx of young men (and a few young women) into indian politics in recent years. Officials with the newly ruling Bharatiya Janata Party (BJP) estimate that as many as 25 percent more youth participated in the 2014 national elections than in previous elections. Young people showed up at rallies, distributed pamphlets, manned phone lines, pushed information on social media and organized communities around polling places in the latest election.

Manjinder Singh,28 got “garib”(poor) tattooed on his hand, when he couldn’t find a job for 2 years and lost all hope of finding one at all. #gentbd #groundtruth #youth #unemployment #reporting #punjab

India’s youth are a potent force for change because of their sheer numbers. Some 704 million people — more than twice the entire population of the United States — are under age 30, according to the 2012 census. That is, more than half of India’s billion-strong population is young and many of them are frustrated.

One measure of frustration is unemployment. One in every third educated young person in India did not have a job in 2012, according to India’s Labor Department. Among educated graduates 15 to 29 years old, the unemployment rate was 30 percent.

‘Power to change the system’

In June, a 25-year-old Punjabi woman was sold to a Kuwaiti family as a maid. She had immigrated to Kuwait to train as a beautician and had become a victim of human trafficking. A month after her sale, her employers allowed her to call home.

Her parents listened in panic and then went on Facebook and found the cell phone number of Mann, now a member of parliament representing the Aam Aadmi Party (AAP). They reached Singh instead.

Singh listened patiently and then called a Punjabi workers group in Kuwait and asked them to rescue the woman. The group was able to find and recover the woman, and she is now back home in Ludhiana, Punjab.

Such phone calls are routine for Singh. Mann is easily accessible by his constituents because his Facebook page prominently displays a cell phone number and email address. Singh attends to all incoming messages on behalf of his boss.

The youngster’s appearance does not hint at his importance as Mann’s right-hand man. He is usually dressed in tees, blue jeans and Fila sneakers, an iPhone 5 seemingly glued to his hand. The two of them are perennially on the road and use hotel suites to take phone calls and do the work of a lawmaker.

“I thought of joining politics so that we get power to change the system,” Singh said in the lobby of a Country Inn along a dusty highway in Talwandi Sabo, Punjab. “Maybe we can rebuild India with a lot of opportunities for new generation.”

The rise in political interest among young people can be roughly marked to 2011. New Delhi, a half-hour flight away from Singh’s Punjab, was reeling from a scandal around — of all things — toilet paper. India had organized the 2010 Commonwealth Games so grandly that organizers had paid $80 per roll of toilet paper at the venues.

The difference between the cited and actual costs had padded the wallets of middlemen, one of a series of scandals that repulsed the nation.

A septuagenarian social activist named Anna Hazare came to Delhi and began a hunger strike within a mile of the Parliament to bring attention to a movement called “India Against Corruption.” He advocated a new law that would hold politicians accountable for their crimes.

Ashwathi,29, works as the personal aide to Arvind Kejriwal, leader of AAP party. She chose to do this over a career in writing. She sees the AAP as a place for new structures and ideas for youth in politics. #india #politics #youth #gentbd

The demand should have been a political non-starter, because a significant number (currently 34 percent) of members of parliament have been charged with crimes.

But the nation was mobilized behind Hazare, with youth-driven protests in all of the major cities. Though the movement lost momentum — with the government ultimately accepting a watered-down version of Hazare’s demands six months later — the political party AAP was born out of the movement in November 2012. AAP’s logo is a broom, meant to symbolize cleansing the politics of corruption. Indians believed in that promise and in December 2013, voters in Delhi decisively voted the AAP into the state government.

But AAP’s tenure in Delhi was rocky and its chief Arvind Kejriwal quit his post in February 2014. His resignation shocked the nation out of its honeymoon with the AAP.

Contempt for the ruling political elite simmered in the lead-up to the national elections this April. The youth — along with the majority of Indian voters — wanted change, but many districts were hesitant to support an untested party like AAP. The party performed dismally in most states, earning just 0.75 percent of the nation’s seats in parliament. The one bright spot was Punjab, where AAP won four seats partly due to Mann’s popularity.

Most young people supported the BJP’s Narendra Modi, who spoke to them on social media about bullet trains, broadband and jobs.

The BJP won by a landslide, securing a record 52 percent of the seats. Since his election, Modi has talked repeatedly about creating opportunities for youth by expanding the manufacturing sector and investing in skills development programs. In April, his government approved an apprenticeship program, which plans to enroll 200,000 youth in on-the-job training programs every year until 2024.

Not all young people are motivated to join politics due to a desire for positive change in the nation. Some just like the power and prestige that comes with politics.

The rush can be powerful, said Aarti Thakur, 25, general secretary of the BJP’s Punjab women’s wing in Ludhiana. She is five feet tall, dressed in a Mickey Mouse tank top and tiger-striped tights one afternoon in August.

Sometimes, when Thakur attends an event as the BJP representative, she is treated as the guest of honor and even older people bend down to touch her feet for blessings. Thakur says she is in the BJP to help people, but is considering becoming a fixer who can connect people who have problems with the right political leaders.

“The youth who joins politics, they consider it as charm or style,” said Harsh Sharma, 29, head of the BJP youth wing in Ludhiana and a lawyer. “They think they will get a vehicle from government, a licensed gunman.”

Sharma thinks that the youth unemployment crisis is due to a lack of vision. School kids are taught by parents to crave well-paid jobs in Delhi, and when that vision does not deliver, they cannot craft alternate futures, he said. “Kids behave like machines,” he said.

The educational system is also faulty, producing a cadre graduates without the right skills, said Byomkesh Mishra, co-founder of a skills development NGO in Lucknow called Medha. The government encourages businessmen to open more colleges, he said, but it does not worry about the quality of the education.

Rajinder Bhandari, a former president of the BJP in Punjab and vice chairman of the Punjab State Planning Board, thinks that the unemployment problem would be solved if young people with degrees, who are fundamentally unskilled, would find all jobs from plumbing to farming respectable. “What’s wrong with farming?” he asked rhetorically.

Preeti Gupta,20, joined BJP to work for women’s safety in her town Itaunja in the state of Uttar Pradesh. In July, a girl was raped and murdered in her district. Crime against women is the highest in this state of India. #gentbd #reporting #groundtruth #india #youth

‘The system is not really good’

Singh, personal assistant to Mann, thinks there is nothing wrong with farming, but it is not a career, it is just a job. And it is one he does not need to do since his family is well off. Young, educated India is aspirational and sees the prosperity enjoyed by the elite, which is inaccessible to many.

That is why about 90 percent of his schoolmates have moved abroad, Singh said.

Back at Talwandi Sapo, he pulled up outside the Country Inn in a Toyota Cruiser that bore witness to the rigors of campaigning in the form of a cracked windshield. Mann climbed in and they headed off to a rally nearby.

Just 200 curious onlookers attended the rally. Mann delivered a speech, as did the chief of the AAP who whisked in and out of the event. It was soon over. Singh drove Mann back to the hotel, the ground floor of which was crawling with policemen assigned to protect some other politician. Mann does not travel with a security detail — he carries a gun.

A week later, results from the local election were announced. The AAP lost by a long shot.

Singh has felt fulfilled since he joined Mann, and he has been able to help make several changes in his hometown. At the same time, he recognizes the limitations imposed on his party by its dismal performance at the polls.

So, Singh is considering moving to Canada in six months to join his fiancé who works as a nurse there. Ultimately, Singh says, given the byzantine corrupt political system in India, he does not think true change will happen unless the AAP is at the nation’s helm.

“The system is not really good in India,” he said. “But when Aam Aadmi Party comes, we will get some opportunity to change the system.”