ON THE GROUND IN BLANDING, UT 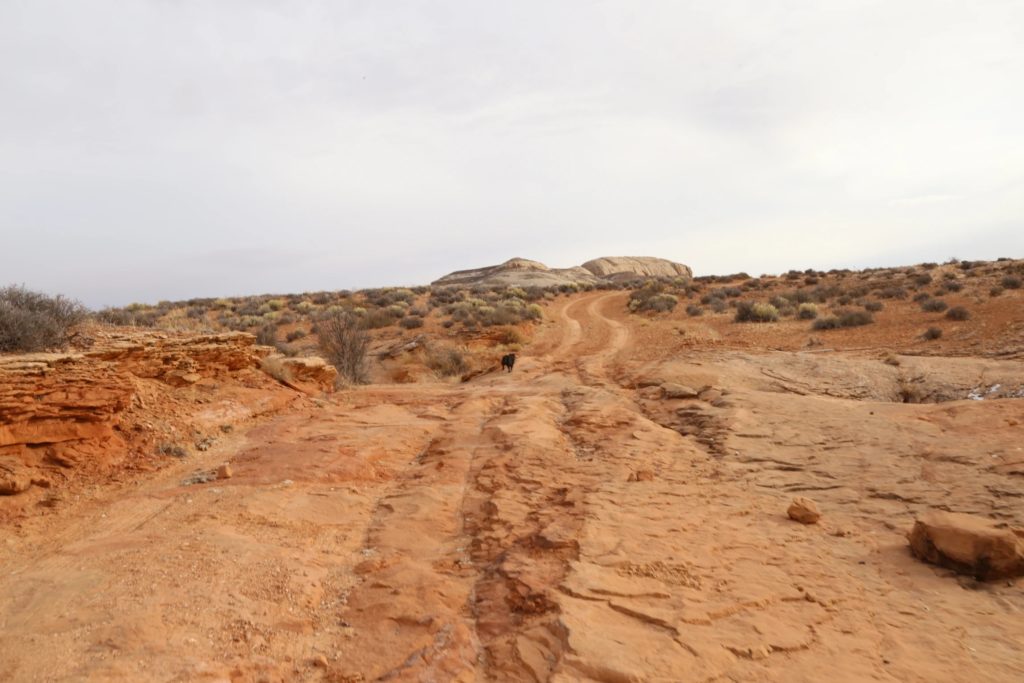 Many of the roads on the Navajo Nation in Utah are red dirt roads created by residents to access their homes. The county used to maintain many of them, but in 2018 was asked by the Navajo Nation to stop. Now, it plans to resume some maintenance, after signing a contract with the Navajo Nation on Feb 24. (Photo by Kate Groetzinger/KUER News)

BLANDING, Utah – I arrived in San Juan County after a historic shift in power.

In November 2018, the county elected two Navajo men, Kenneth Maryboy and Willie Grayeyes, as county commissioners, giving Navajos a majority on the three-person commission for the first time in the county’s 140-year history.

San Juan County is geographically huge, but home to only 16,000 people. Around half are Anglo and half are Native American, according to the Census, which tends to undercount Native populations. The Navajo Nation, the largest Indian reservation in the country, overlaps with the bottom third of the county. Accordingly, the Native population lives mostly in the southern half of the county, while Anglo residents primarily live in the north.

The geographical split is a remnant of when Mormon settlers came to San Juan County in the late 1800s. They settled first in the southern part of the county, but were driven north by flooding and conflict with the Native population, which included Utes and Navajos. Today, the split manifests in unequal services across the county due to a dizzying web of bureaucracy and overlapping jurisdiction.

In the northern part of the county, government mostly works as it should: there are good roads, schools and libraries. In the south, by contrast, the majority of roads are not paved and many become impassable in bad weather. The libraries are only open a few days a week, and kids ride school buses for up to three hours a day to get to schools that are many miles away.

Over its 140-year existence, the county has provided varying levels of service to Utah Navajos. Residents in the northern part of the county will tell you they’ve tried to help their Navajo neighbors as much as they can. And there’s some truth to that. Bruce Adams, an Anglo commissioner from the north, was recently presented a gift by a Navajo official from a community in southern San Juan County, Navajo Mountain, to thank him for allocating $5,000 of the county fair budget to buy flour and blankets for the elderly at Navajo Mountain.

But there are other examples, in which past county governments have displayed less generosity. In 2012, the Navajo Nation requested the county draw new voting districts because the districts in place disenfranchised Native voters. But the county, which had not redrawn its districts since they were imposed by a federal court in 1984, refused. The county commission maintained they didn’t have the power to redraw the districts, and the Navajo Nation sued to prove that false. In 2017, the Nation won, and new districts were imposed by the court in 2018.

The election of Maryboy and Grayeyes, which followed the redistricting, was widely reported and celebrated in the national media. The articles pointed out conditions long-suffered by Utah Navajos, such as a lack of running water, rough road conditions and other crumbling infrastructure. And, though they don’t write it, many imply the power shift will fix these endemic problems.

But it’s not that simple. Century-old divisions and bureaucratic red tape complicate the delivery of even the most basic services on the Navajo Nation.

“We’ll be driving ice-packed roads for a week before we get a snow plow out here,” said Hank Stevens, Chapter President of Navajo Mountainor Naatsisʼáán, which means Head of the Earth in Navajo. It is a small, remote village on the Navajo Nation that sits on the Utah-Arizona border.

When it was in charge of maintenance, the county used to keep equipment at Navajo Mountain, according to Stevens, and even had an employee who lived on site. If there was snow, he’d be clearing the roads by 6 a.m., Stevens recalled, so people could drive to work safely.

“My position is: If you can’t maintain [the roads], then relinquish them to the county,” he added.

Many community members share Stevens’ frustration, but they don’t know where to direct it. Residents complained to the new majority-Navajo commission for months, demanding the county resume road maintenance, but they can’t do that until they sign an intergovernmental agreement with the Navajo Nation, pending on February 24. Still, that will only allow the county to maintain bus routes, leaving many residents with poorly maintained roads.

Commissioner Maryboy says the situation is indicative of a broader issue on the Utah Navajo strip: rather than work together to fix issues, the various overlapping governments pass the buck, leaving people without important infrastructure and services.

“In reality, the Utah Navajos in San Juan County [are] like a red-headed bastard child,” he said. “The Navajo Nation says, ‘You guys are under the State of Utah, so therefore any service you need, you go to the state.’ And then the county says, ‘Like hell you are. You need to go back to the Nation.”

One thing both former and current San Juan County commissioners agree on is that they are stuck in the center of this political tug-of-war, and simply changing the makeup of the commission won’t solve that. But it could help, by slowly opening up better lines of communication between the commission and the Navajo Nation.

Watching this process play out on the ground is not exciting or inspiring. And communicating it to an outside audience can be challenging and frustrating. But that doesn’t mean it’s not worthwhile. After all, someone has to remain, long after the celebratory photo-ops are over, to record the slow steps toward progress.