In the West Bank, World War I never ended (VIDEO) 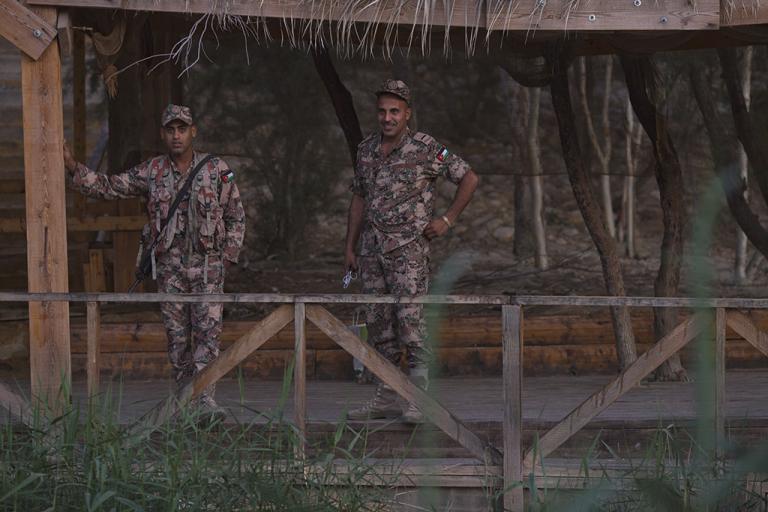 JERICHO, West Bank — History flows through the Jordan River, and also divides it.

In the Hebrew Bible, it’s where Moses first saw the Promised Land. In the Christian tradition, it’s where Jesus of Nazareth was baptized. In Islam, it’s the site of prophecies and miracles.

And in the Great War, which began 100 years ago this year, the slow, winding river shaped the contours of storied battles that featured characters who still loom large in history.

Along these banks, T.E. Lawrence, or “Lawrence of Arabia,” allied with Prince Faisal in the Great Arab Revolt of 1916. The legendary British General Edmund Allenby crossed this river, sending the Ottoman Empire into retreat.

The main bridge here is still named after Allenby. In the aftermath of World War I, the British established the Mandate of Palestine and drew the lines for what was then known as the Emirate of Transjordan, now Jordan.

Today, the entrance to the ancient city of Jericho is a khaki-colored landscape of rolling dunes in the West Bank that plunges down to the more lush Jordan River Valley with its date palm plantations and orange groves. Just outside the Palestinian-ruled city of Jericho, which has a population of about 20,000, a dirt road is lined by barbed-wire fencing and warning signs that read, “Danger. Land Mines. Keep Out.”

This marks the part of the Jordan River Valley that is known as Area C, which has fallen completely under the control of the Israeli Defense Forces since they captured the area after the 1967 Six-Day War. The river forms an international border between the modern-day Hashemite Kingdom of Jordan and the Israeli-occupied West Bank.

The border remains a fault line that runs straight through the Israeli-Palestinian peace process. Any hope to revive the talks seems distant now, but if they are to be revitalized both sides acknowledge that serious talks would have to flow through here.

Just beyond an ancient Greek monastery site, we were permitted by Israeli soldiers to pass the final, gated checkpoint and go down to the river where Christian tradition holds that John the Baptist preached his message in the healing waters of the Jordan.

The river is narrow here, no more than 30 feet across and flanked by tall, green reeds. Israeli troops in the area of Qasr al Yehud, a site on the banks of the Jordan River near Jericho. (Heidi Levine/GlobalPost)

Along a gentle turn in its banks, the distant sound of police radios crackling with Arabic came closer. A Jordanian soldier in a camouflage uniform emerged, sporting a rifle and a pair of white ear buds connected to a smartphone.

We were close enough to strike up a conversation and I asked the Jordanian border guard, who said his name was Nasser, about the border, its history and the modern reality it faces as a particularly contentious part of the so-called peace process.

Across the river, Nasser spoke through an interpreter, quoting an Islamic verse about the Jordan River and the prophecy of the “end times.” In the hadith, he explained, the Prophet Mohammed spoke of Jews gathering on the west side of the river, and that Muslims will be called to confront them.

He quoted from the hadith, considered by Muslims to be the definitive collection of Mohammed’s prophetic statements, including a particularly violent passage which includes the declaration, “The Hour will not be established until you fight with the Jews.”

Nasser continued in his own words, “There is no war now. But the struggle continues on the other side, and it will continue until the end days.”And then he moved on with his guard patrol and walked further down the banks of the river.

This discussion shouted across the river was just a glimpse of the deep-seated divisions and sometimes hatreds that still exist in the Israeli-Palestinian struggle. Here was a border guard from Jordan, which has a signed peace agreement with Israel, openly quoting scripture calling for religious war. It was the kind of conversation that leaves anyone who knows this land profoundly distressed and depressed at how far there is to go for any real or lasting peace.

History looms over the current conflict. And you can’t understand the present moment without understanding the past.

It was in 1917, the middle of World War I, when the British promised, unbeknownst to the Arab leaders who fought alongside them, a Jewish state within Palestine in the so-called Balfour Declaration. After three decades under British control, tensions grew as the Mandate was scheduled to come to an end in 1947. In November of that year, the UN adopted a resolution calling for a partition of Jewish and Arab states. The Arab League rejected the partition.

Israel declared its own independence in May 1948. The Arab countries invaded almost immediately and the Arab-Israeli War erupted in May 1948. In 1967, the second Arab-Israeli war erupted and Israel occupied the rest of Palestine and East Jerusalem. All of this history is still alive today as the 1993 Oslo Accord sets out a process to return Palestinian land captured in 1967 in exchange for peace. The Jordan River Valley remains one of the more contentious areas in the negotiations.

As part of the stalled Oslo agreement, Palestinians expect a withdrawal of the Israeli military and the settlements that dot these hillsides. They expect to have control over their own border with Jordan which would open them to trade and travel and be essential to a viable state. The Kingdom of Jordan, which has already signed an interlocking peace treaty with Israel, holds the same expectation.

The conservative government of Israeli Prime Minister Benjamin Netanyahu has made it clear the Israeli Defense Forces will stay for years after any agreement and security would have to be guaranteed. The Israeli government sees the valley as a potential gateway for enemies in a bad neighborhood to mount an attack.

In the end of last year, US Secretary of State John Kerry sought to revitalize the moribund Israeli-Palestinian talks and recognized the Jordan Valley as critical to the future of any peace process.

In January, just after Kerry put the Jordan River Valley back on the agenda, Palestinian negotiator Saeb Erekat, who lives most of the year in Jericho, led a group of journalists and diplomats on a tour of the valley.

He claimed that Israel takes more than $600 million in annual revenue from valley agriculture through a string of collective farms and settlements.

“It’s not about security,” Erekat told the gathering, according to the Associated Press. “It’s about stealing land and profiting.”

The flurry of diplomatic activity around Jordan, spurred right-wing leaders in Netanyahu’s coalition government to loudly affirm that they want Israel to permanently annex the entire valley, which represents about one quarter of the West Bank.

Netanyahu’s deputy defense minister, Danny Danon, has led that charge, taking reporters and diplomats on a rival outing in which he planted trees and pledged the area would remain under Israeli control “forever.”

Any chance for Kerry to revitalize the talks now seems more remote than ever. The war between Israeli and Hamas this summer flattened vast swaths of Gaza and left some 2,000 people killed in what the international community saw as indiscriminate shelling by Israeli of Palestinian residential and industrial areas.

Along with much of Gaza, the peace talks were reduced to rubble.

The Jordan River is contentious because it holds perhaps the single most precious commodity in this part of the world: water. It is vital to the farmers on both banks. And, under the Oslo agreement, the flow of water remains controlled by Israel.

Sama Zeineh, a Jericho municipal official, said that there is no direct contact between Israeli and Palestinian officials over the issue of water rights in this key agricultural land for both sides of the divide. A Russian Christian pilgrim baptizes herself in the Jordan River at the Qasr el Yahud baptismal site near Jericho on October 16, 2014.  (Heidi Levine/GlobalPost)

Zeineh said she serves on many committees and commissions focused on a stalled plan for a $32 million sewage plant which calls for recycling waste water for agricultural use. All of the efforts are left on hold, she explained, by a disagreement over whether a part of the plant should be allowed to be in an Israeli-controlled area.

Meanwhile, the expansion of Israeli settlements continue around Jericho, she said, and the agricultural successes of several kibbutz nearby are supported by the government often at the expense of the Palestinian farmers whose needs are not factored in. Distribution of water is controlled by the Israeli government.

“The Israelis are planning for decades ahead and we can barely plan for tomorrow,” said Zeineh, who is married with three children.

“The borders are agreed upon. It’s all very clear. So why aren’t the Israelis living up to that? … This is the only border to Jordan and we need it to be open, to develop trade and to live our lives, to plan all issues, including water rights, the environment, agricultural, trade, tourism and everything in our lives,” she said.

Jad Isaac, director general of the Applied Research Institute of Jerusalem, which is dedicated to research and analysis that enables the self-reliance of the Palestinian people by promoting greater control over their natural resources. He knows his history and immediately began speaking of World War I.

“Those who drew the boundaries of the modern Middle East were the Western colonial powers. And they made sure the tensions and the fissures divided those of us who live here. They made the boundaries to suit their own interests,” he said.

And, now, he added, “Those lines that came after WWI are falling apart. It was intended as divide and conquer and it has fractured and failed and that is what we are seeing today.”

“The fighting stopped 100 years ago, but the war has never really ended,” Isaac said.

In a tremendous irony of history, he said, Turkey could play a role here because it has a surplus of water.

“I think the Ottomans are coming back. Turkey is not going to accept — and in many ways never has — accepted the limited role it was given in the region after its defeat in World War I,” said Isaac.

Turkey has already emerged as a critical player in dealing with the rise of the so-called Islamic State in Iraq and Syria, along with the Palestinian Islamist movement of Hamas and even in the details of the Israeli-Palestinian process, such as the crucial issue of water rights. The country has nurtured a successful economy and a strong military, while Egypt has lost its leadership role.

And Turkey, as Isaac points out, could divert water to flow south into Israel and the West Bank and allow for a more equitable sharing of water resources. And so perhaps, as he put it, “the Ottomans will make a return.”

“This history is all unresolved. You hear it every day,” he said, as if the cannons of World War I were still echoing through the valley.