In the shadow of Trump’s visit to India, religious violence challenges the official narrative 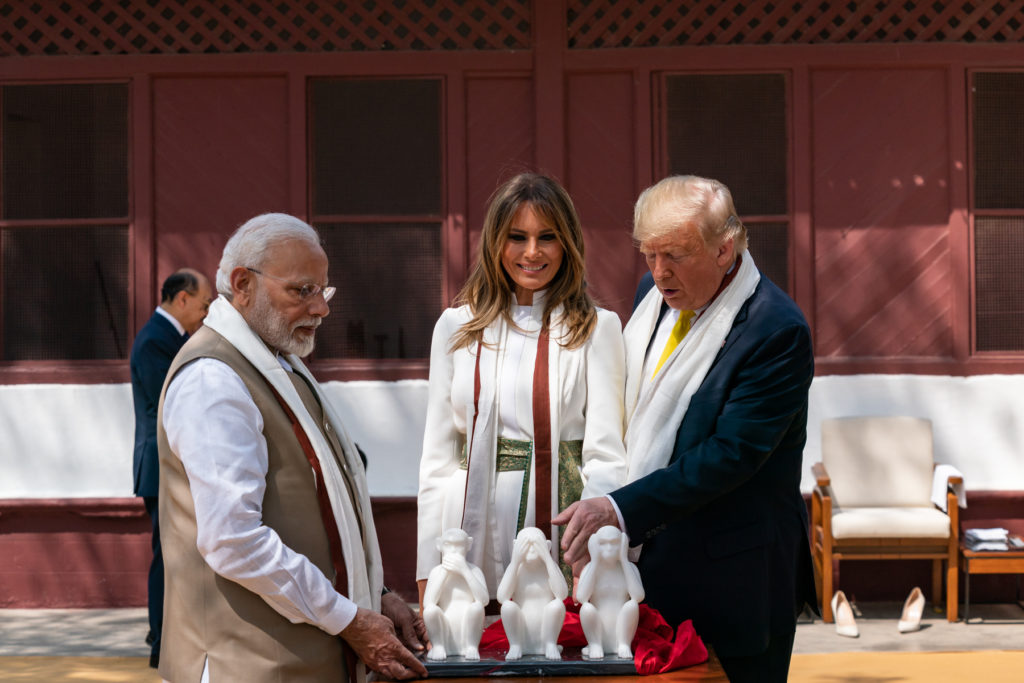 President Donald J. Trump and First Lady Melania Trump, joined by Indian Prime Minister Narendra Modi, look at a gift from the Prime Minister during a visit to the home of Mahatma Gandhi Monday, Feb. 24, 2020, at the Gandhi Ashram in Ahmedabad, India. (Photo by Andrea Hanks/The White House)

But that same day mobs of Hindu nationalists, incited by a member of Modi’s party, were attacking Muslim protestors in New Delhi, an echo of the Gujarat riots of 2002, when 1,044 people, mostly Muslims, were killed in a three-day burst of violence. Modi was Chief Minister of the state at the time.

During his two-day visit to India, Trump showered Modi with praise for his leadership style, popularity and economic policies, avoiding mention of escalating clashes resulting from the disenfranchisement of the country’s 201 million Muslims, the second-largest Muslim population in the world. In August, the national parliament abolished a constitutional provision that gave a degree of autonomy and special rights to the besieged state of Kashmir, India’s only Muslim-majority state. A December law grants citizenship to refugees from Pakistan, Bangladesh and Afghanistan—India’s Muslim-majority neighbors—but crucially excludes Muslims.

I have been covering the erosion of India’s democracy under Modi since 2014, when he was first voted into power, and have most recently reported the unrest caused by Modi’s government since the abolition of the constitutional provision;  the consequences of the implementation of the National Register of Citizens (NRC) in the northeastern state of Assam that left 1.9 million people, many of them Muslim, off of India’s citizenship rolls, declaring them illegal immigrants, and a court verdict supported by Modi that allowed the construction of a Hindu temple on the site of the Babri Masjid, a mosque desecrated by Hindu nationalists in 1992. The Citizenship Amendment Act (CAA) that granted Indian citizenship to non-Muslim refugees living in the country before December 31, 2014, is the latest of Modi’s controversial policies.

“There is all the difference in the world between a nation that seeks power through coercion, intimidation and aggression, and a nation that rises by setting its people free and unleashing them to chase their dreams. And that is India,” Trump said to the crowd in Ahmedabad, the largest city in Modi’s home state of Gujarat.

More than 500 miles away, in the Jaffrabad locality of North East Delhi, a group of Muslim men and women were staging a protest against the CAA.

At the time of Trump’s speech, Kapil Mishra, a local representative of Modi’s Bharatiya Janata Party (BJP), was leading a group of CAA supporters in demanding protesting Muslims to disperse, claiming  he would have no option but to respond with forceful action to clear the streets. He also addressed the police directly on Twitter, writing: “We have given a three-day ultimatum to the Delhi Police to get the road cleared. Get the Jaffrabad and Chand Bagh road cleared.” The tweet has been deleted, but local media reported on it.

These are visuals from #Chandbagh after a day of violence. Chandbagh is in Delhi, the capital of the largest democracy in the world. And Delhi is burning. pic.twitter.com/sJ1sUVLJZt

From there, things escalated. Hindu and Muslim groups threw rocks and showered batons on one another, the fighting quickly fanning across North East Delhi, where it took the form of predominantly anti-Muslim riots, though Hindu areas were also ransacked. The violence has now carried on for more than two days, claimed dozens of lives—both Hindu and Muslim—and injured more than 200 people.

Hindu men—supporters of Modi’s BJP and the right-wing organizations backing it—have run amok in predominantly Muslim areas of North East Delhi, gutting Muslims’ homes, beating and killing hapless members of the community on the roads. Reports pouring in from Delhi pointed toward police inaction and indiscretion as some critics allege the complicity of law enforcement. A Delhi High Court judge was brazenly transferred the same day he condemned the government and the police, which is directly under the control of the Modi administration.

In the combative days that followed, armed Hindu mobs targeted Muslim-majority neighborhoods, reports suggest, with sticks, stones and Molotov cocktails. These areas fall within a district of Delhi represented in the local legislative body and by the BJP in Parliament. Reports suggest the localities were cordoned off, that the police enabled mobs to roam freely, armed with stones, rocks, batons and guns. The police have denied the allegations. As of now, tens of injured have been brought into local hospitals with bullet wounds despite very strict regulations on the personal possession of firearms in India.

On February 23, a day into the riot, the North East resembled a war zone, and a mosque was set ablaze in the neighborhood of Ashok Nagar. A mob went around shouting ‘Jai Shri Ram’ (Long live Lord Ram). The star and crescent sign adorning the house of worship was vandalized while India’s national flag and a saffron flag—often used by the Hindu right as a symbol of Hindu dominance—were placed atop the mosque.

Just a few miles away, President Trump was welcomed by an Indian military honor guard with a 21-cannon salute, and a meal on the lush green lawns of Delhi’s Hyderabad House. Indian democratic fault lines under Modi went entirely unacknowledged, never mind condemned.

The new normalcy of Delhi in which only crows caw and roads are lined with bricks thrown in fits of rage. Chaman park in Shiv Vihar

“He wants people to have religious freedom, and very strongly,” Trump said, responding to reporters in Delhi concerned about Modi’s silence on anti-Muslim violence in the country. Trump didn’t address the CAA or the violence happening during his visit.

Trump’s kinship with Modi follows the president’s demonstrated pattern of admiration for leaders with authoritarian leanings, such as Jair Bolsonaro in Brazil or Rodrigo Duterte in the Philippines, and the sentiment is mutual.

Last October, Modi had hailed Trump as a beacon of global democratic leadership during the ‘Howdy Modi’ event organized by his followers in Houston, Texas. He seemingly endorsed the U.S. President for reelection, crossing into partisan territory that previous Indian Prime Ministers avoided.

“In the words of candidate Trump: Abki baar Trump sarkar [this time, a Trump government],” Modi said, employing a Hindi slogan used by Trump as he  canvassed for Indian American votes in 2016. It was extrapolated from Modi’s own election cry in 2014. Indian Americans, who have traditionally steered Democratic, are a tough electoral prize for Trump to win—80% of the community voted for Clinton in 2016.

Beyond the electoral push with Indian Americans, Modi’s tacit approval of Trump policies and his willingness to engage in trade discussions make him a key ally of the U.S. president in a world where most heads of state eschew him.

As long as the platitudes and the negotiations for a trade deal continue, creeping authoritarianism in India won’t be on the agenda for the U.S.

Listen to Soumya’s reporting in India for our series Democracy Undone: The Authoritarian’s Playbook