In the shadow of COVID-19, an unprecedented attack on press freedom 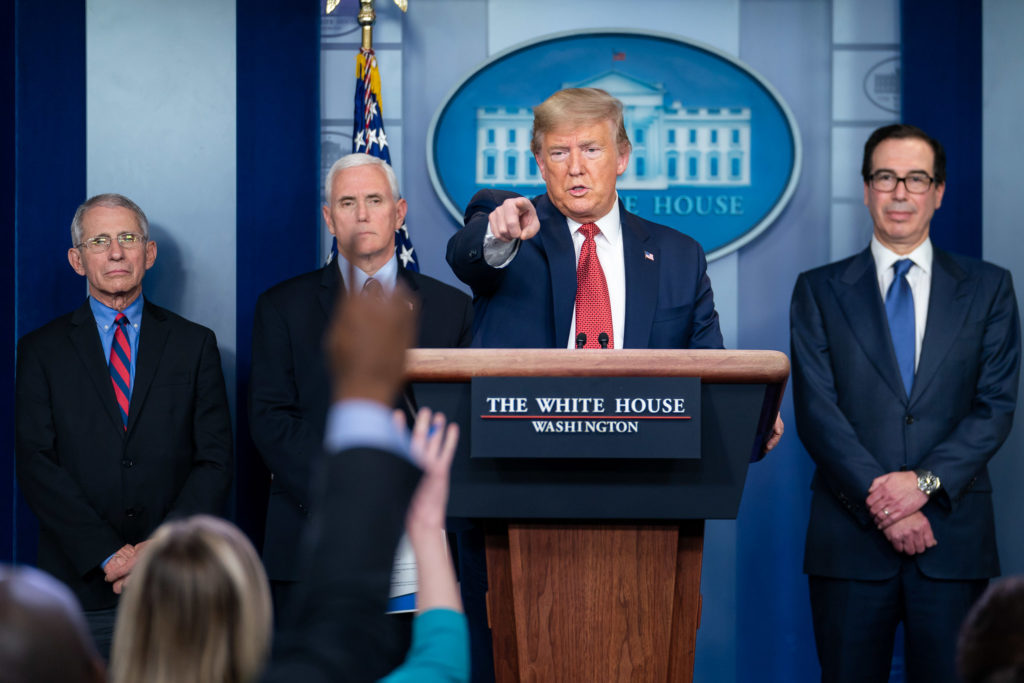 President Donald J. Trump points to a reporter with a question during a COVID-19 update briefing on Wednesday, March 25, 2020. (Photo by Tia Dufour/The White House)

Trusted journalism has never been more vital, and never more at risk.

On this World Press Freedom Day, every corner of the world is under siege by a pandemic making it glaringly clear just how much we all rely on trusted and accurate journalism from the frontlines. In the age of COVID-19, that frontline reporting can quite literally be a matter of life and death for the reporters out there trying to tell the story for all of us, who need the reliable information they gather for our own health and safety.

And in this unprecedented struggle, journalism finds itself under unprecedented attack. The forces arrayed against a free press in this age of COVID-19 are political and economic and there is good reason for all of us to be aware of what is at stake in our own lives when a reporter is intimidated, suppressed, jailed or in some places murdered for telling the truth. For doing their job.

From Washington to Beijing and Iran to Brazil, journalists are up against governments that demonize them when they challenge authority by asking the hard questions or revealing uncomfortable truths about the official response, or lack of it — truths that these governments would often prefer to keep out of the light of public scrutiny. And it’s not just happening in China and other authoritarian countries, where press freedoms have long been restricted. Right here in the United States, President Trump demonizes reporters who ask hard questions about legitimate concerns for safety caused by his own falsehoods, and publicly blasts the reporters as “enemies,” representatives of “fake news.”

This has prompted a call in some circles for the federal government to allow for emergency funding in the stimulus package to flow to local news organizations, to help them sustain their critically important coverage of this public health crisis as they are officially deemed an “essential service.” It is a complex and fraught debate that is just beginning to unfold. One possible avenue for funding could be an infusion of federal dollars to pay for public health advertising and public service announcements that could flow through local news organizations, helping them to sustain their coverage and also preserve editorial control and independence. As co-founders of Report for America, Steve Waldman and I recently wrote about this for The Atlantic.

But beyond the politics and the economics of the crisis for journalism in the U.S., the earliest suppression of reporters in this crisis began in China, where the outbreak first emerged in Wuhan, Hubei Province. Two leading Chinese journalists, Chen Qiushi and Fang Bin, have been reported missing since February, when they first began their hard-hitting, fact-based reporting on allegations that their own government’s response to the COVID-19 outbreak was slow at best, and that the severity of the outbreak may have been intentionally understated by Chinese authorities. Reporters from The New York Times, Wall Street Journal, Washington Post, Voice of America and TIME were expelled in March 2020 for doing their job, asking the hard questions about China’s response. Journalists in the Philippines, Cambodia, Ethiopia, Ghana, Russia, Venezuela and Haiti have been threatened, harassed, attacked and arrested for their COVID-19 reporting, according to the international writers’ group, PEN.

Some countries have seen authoritarian leaders using the pandemic to seize unprecedented powers over their people. In Hungary, there is new legislation to punish anyone who publishes “false information” about the coronavirus, leaving it up to the repressive government of Viktor Orbán to decide what is true and what is false, and punishing violators with up to five years in prison.

In Egypt, journalists have been pressured by government authorities to downplay the rate of infections, and a British journalist for the Guardian newspaper had her credentials pulled as a reporter for the New York Times was censured for a tweet. Both were targeted for sharing data that contradicted official claims on the number of people infected by the virus. In Turkey, journalists have been detained for their reporting on COVID-19 amid a broader crackdown on the media since the attempted coup of 2016.

As the Committee to Protect Journalists’ Executive Director Joel Simon has observed, “In normal times, Western democracies would be able to effectively push back against this narrative by citing examples of how open, transparent, and critical media coverage has supported an effective government response. But such examples are few and far between. In the U.S., false and misleading information from President Trump has been amplified by a network of commentators on social media and on Fox News, delaying the public response in the country.”

In normal times, advocates for a free press would say that journalism is the fourth estate and that it is as vitally important as the executive, judiciary and legislative bodies in any free and open democracy. It is not normal times. The pandemic has made it abundantly clear that we live in an age of erosion, when discernible facts are dismissed on a daily basis and, as a result, so is truth itself.

Now facts are mounting that reveal Trump’s delayed response, despite evidence presented to him in briefings as early as January, cost lives and unleashed an economic downturn not seen since the Great Depression. Trump has tried to recast himself as a “wartime” president and seems to have interpreted that as a license to drive an assault on journalists that is more concerted and more perilous than the sporadic attacks he has unleashed since he first took office, when he labeled journalists “the enemy of the people.”

Last week’s White House news briefing offered a freshly rude example of these tactics, when he labeled a Washington Post reporter, as well as reporters from CBS and CNN, as “fake news.” The Washington Post White House correspondent, Philip Rucker, respectfully challenged the president on his assertions, disclaimed by even his own medical experts, that sunshine and heat would suppress the virus.

This World Press Freedom Day will require us to think about an ongoing escalation against the media from Washington to Beijing that seems to be playing out in so many different ways in so many different corners of the world. CPJ’s Simon framed it in the context of the future:

“Amid efforts to beat back a global pandemic of a kind unseen in more than a century, and to prop up a global economy on the brink of depression, it’s hard to focus on long-term consequences. But we must be mindful that when we get to the other side of the pandemic, we may be left with a narrative, being written by China, that government control over information was essential to combating the crisis. That would be a devastating blow to the global information system, one that could endure even as the memories of the terrible pandemic we are currently facing slowly fade.”

So on this World Press Freedom Day we all have a chance to think about the role of journalism in the time of COVID-19. And that means thinking of  local journalism. Our right to access accurate and timely information in current and future crises depends on it.

Related: How Trump sells his war on truth