ON THE GROUND IN CHATTANOOGA, TN

In Chattanooga, a ministry for women in prostitution 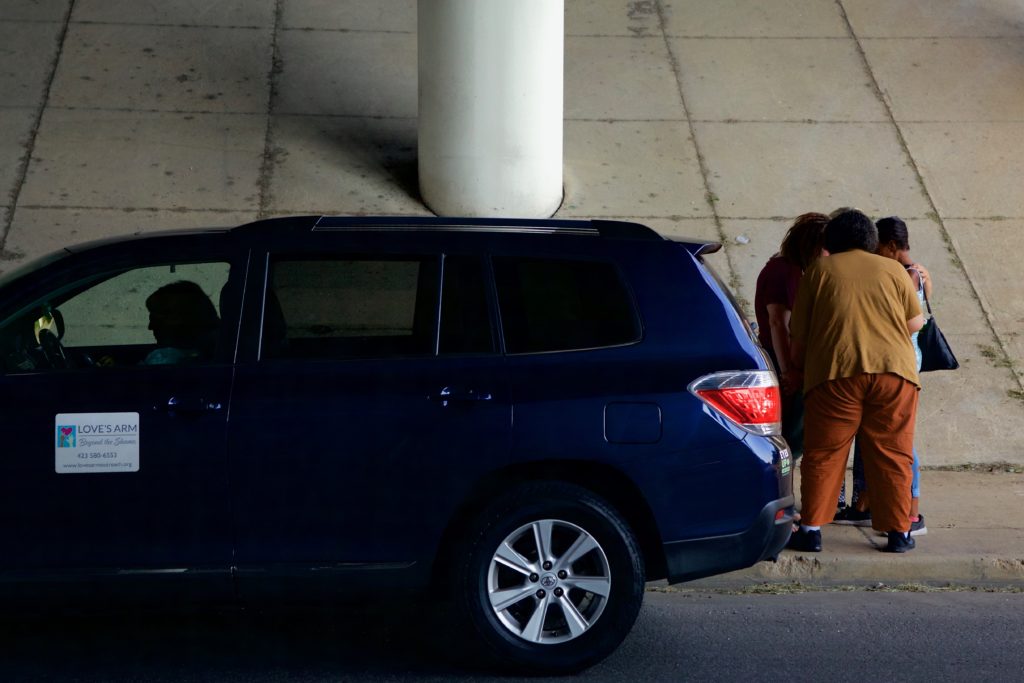 Volunteers with Love’s Arm speak with a woman under an overpass in Chattanooga on July 27, 2019. (Photo by Wyatt Massey/GroundTruth)

Chattanooga, Tenn. – The sun was going down as we passed the Waffle Houses and Krystals on the side of the road. Christian pop played on the stereo of Mimi Nikkel’s Toyota Highlander.

In the backseat were two volunteers of Nikkel’s ministry, Love’s Arm, a faith-based nonprofit focused on ending prostitution and addiction-related sex work. Nikkel shifted the car into drive and we began the route her nonprofit makes every week. The group runs a variety of outreach programs, including classes in prisons, staffing a sex trafficking hotline and maintaining a recovery home for women. One of the main ways women in trafficking and prostitution learn about Love’s Arm services is through street outreach. On these afternoons and nights, Nikkel brings along several volunteers, some of whom have been out dozens of times. And on this afternoon, I squeezed into the backseat and joined them. Often, the volunteers are seeing this side of their hometown for the first time. The group drives the streets, pulling over to pop the back hatch to hand out water, food, bags of hygiene products and condoms.

“Our main desire is to connect with them where they are,” Nikkel said. “That they have a kind, caring human being connect with them on a basic level of letting them know, ‘You’re no different than I am and you’re worthy of love and dignity and respect.”

Love’s Arm volunteers travel the same routes as the men in Chattanooga who buy sex. Many of the women know Nikkel by name. They recognize her signature blue Highlander. Some come running to say hello. Others, like the women Nikkel has helped start rehab, try to go unnoticed until the red-headed driver calls out there are no hard feelings. They often gather as a group to pray, hold hands, hug and, most importantly, listen.

“For many of them, if they want a hug, we give them a hug, and that may be the only safe person that has given them a human touch in years,” Nikkel said.

Nikkel listens. This is how she knows people’s names, their stories. They are stories told in the parking lot of a Family Dollar or alongside her car on a cracked sidewalk. They are heard under highway overpasses while, above, people with six-figure salaries drive to their million-dollar homes perched on the surrounding ridges.

During one outreach ride, Nikkel spotted a woman she knew and jerked the Highlander across a lane of oncoming traffic to park her car in the wrong direction. She popped open her door to embrace the woman, their hug half in the vehicle and half out. The two share similar backgrounds, which earns Nikkel trust on the street and makes her ministry effective.

When Nikkel began the group nearly 15 years ago, she was recovering from her own trauma: she was trafficked as a child and later, as she described it, sold herself to feed her growing addictions as a teenager. She knows what it feels like to be in the same situation as the women she greets, the women she hugs on the side of the road.

Everyone walks on the same dirt, Nikkel said.

Since 2010, the Chattanooga Police Department has handled more than 800 reports of human trafficking, according to police data. A 2011 Tennessee Bureau of Investigation report with Vanderbilt University, found Hamilton County was among eight of the state’s 95 counties to have more than 100 reported trafficking cases over a period of two years. The number of cases reported in the state each year more than trippled between 2012 and 2018, according to data from the National Human Trafficking Hotline.

Nikkel embarked on an outreach ride, and reflected on how everything is connected. The trials of her life, the long years of recovery, brought her to a path of healing others. The neighborhoods where her ministry works connect to the rest of the city — the men paying for sex and trafficking women come from all over, even the “nice” parts of town. Pretending as though trafficking only happens in or only affects certain neighborhoods is foolish, she said.

On my way to and from work, I often cross the routes Nikkel took me along six months ago. I pass the Waffle Houses and Family Dollars. While I drive to another interview or some event to cover, I see the side streets where Nikkel stops to minister, where she stops to listen.

Dozens of Sunday editions have come and gone since the weekender featuring Nikkel and her ministry. Our readers have moved on to other topics, but Nikkel continues her work. I do not need a front page story to tell me this. I recognize her blue Toyota Highlander, just like the people Nikkel loves.

Wyatt Massey covers faith and religion for the Chattanooga Times Free Press. This dispatch is part of a series called “On the Ground” with Report for America, an initiative of The GroundTruth Project. Follow him on Twitter: @News4Mass.