ON THE GROUND IN FORT WORTH, TX 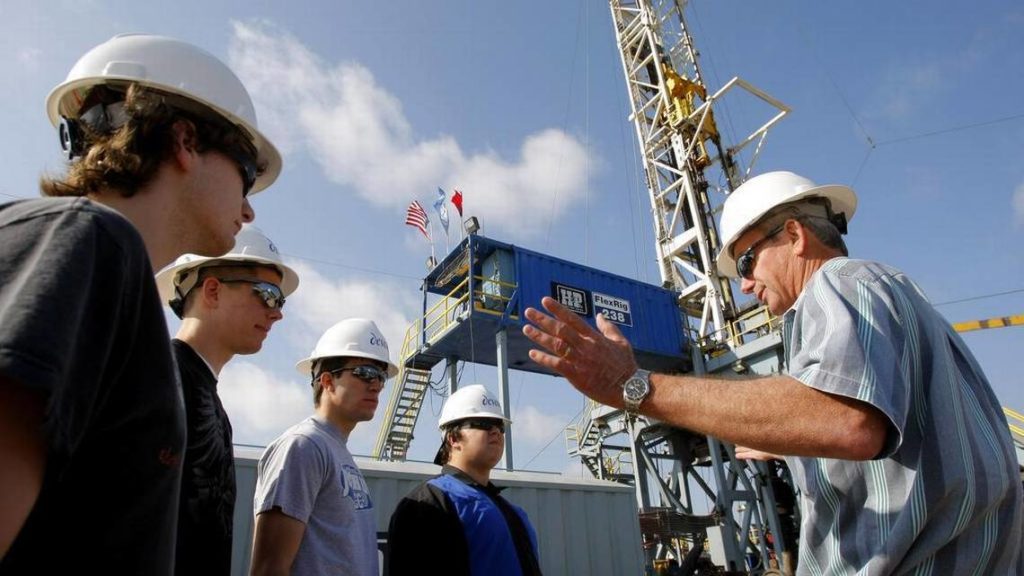 FORT WORTH, Texas — The vast majority of rigs that dotted the Fort Worth landscape more than a decade ago are long gone, along with the economic boom that natural gas drilling brought to North Texas in the late 2000s.

But a small regional resurgence in hydraulic fracturing, or fracking, during the summer of the COVID-19 pandemic has dredged up tensions between anti-fracking activists and local government officials.

Over the course of the summer, French energy giant Total submitted at least 26 new gas well permit requests in Fort Worth-area cities, leading to renewed calls for action from local activists concerned about the environmental impact of drilling.

“With Total moving back into Fort Worth, I have been warning people and telling them about this, and they’re just ignoring it,” said Sharon Wilson, a former oil industry employee in Fort Worth who now serves as a senior field advocate for the environmental advocacy group Earthworks. “They don’t believe it. They think it’s over.”

The clash over the environmental impact of drilling in Texas — a state that leads the nation in oil and gas production — comes amid fears that it may be too late to reverse global warming. Recent extreme weather events, including intense hurricanes hitting the Gulf Coast and drought conditions leading to unprecedented forest fires in California and Oregon, have drawn more attention to how human activity contributes to climate change.

Companies like Total may be taking a renewed interest in drilling in the North Texas area because natural gas prices recovered relatively faster than oil prices during the pandemic, according to Bruce Bullock, director of the Maguire Energy Institute at Southern Methodist University. The French multinational company already held several leases in the Fort Worth area, which is part of the Barnett Shale, making it cheaper to drill a new well at existing sites, he added.

“The legal cost is already sunk since they already own the lease holds,” Bullock said. “Given that and the fact that the forward price is so high, they can drill so deep and it doesn’t take very long to drill a well anymore, it’s relatively attractive to them right now.”

Total’s decision to ramp up operations in the area has local government officials in a tenuous position with Texas environmental groups, as city officials have an obligation to allow gas companies to assert their mineral rights. At stake, Dallas-Fort Worth activists argue, is the degree of transparency energy companies must meet while pursuing new gas wells, and if local leaders will allow those permits to go through without city council hearings.

Thanks to a 2015 law known as House Bill 40, Texas cities are prohibited from banning drilling and can only implement regulations if they are “commercially reasonable,” such as requiring noise barriers in neighborhoods or setback limits, a required distance between buildings and gas wells. That law was in response to a highly publicized battle in the North Texas city of Denton, where voters decided to ban fracking within city limits in 2014. The ban lasted 196 days before House Bill 40 was signed into law by Gov. Greg Abbott.

In the years since, the law has not prevented local activists from pushing their city council members to reconsider granting permits for new wells, particularly when those wells are near schools, hospitals or communities hit hard by the coronavirus.

Ranjana Bhandari, who founded the environmental organization Liveable Arlington in 2015, has led the fight against several drilling permit requests in and around the Tarrant County region, but especially in Arlington, a city of nearly 400,000 best known for AT&T Stadium, the home of the Dallas Cowboys. The suburb is also home to more than 350 gas wells that began popping up in 2009.

This June, Bhandari and Liveable Arlington volunteers mobilized a group of residents to oppose three new gas wells at an existing drilling site just over 600 feet from daycare facility Mother’s Heart Learning Center. During a city council hearing on the permits, daycare director Wanda Vincent asked the Total representative if he could guarantee that the children and workers would not suffer from health effects, including asthma, from the wells.

“With all this going on, it makes me wonder down the line will some of our babies become sick or ill because of this?” Vincent said.

Kevin Strawser, spokesperson for Total’s Fort Worth branch, TEP Barnett, said in the meeting that the company has operated on the site for “at least 10 years without any issue” and that they stand behind their record.

She found her answer when, in August, a volunteer discovered that gas companies would receive “administrative approval” from Arlington’s planning and development department as long as the permit requests are for wells within their previously approved “drill zone.” This technicality means that the permit requests will not face council hearings, even if “protected buildings,” like medical offices or schools, have been built within the 300 feet required between a well and a protected building.

“I’ve not seen this in actually seven, eight years of watching the permitting of drilling,” Bhandari said. “Very little stuns me when it comes to gas drilling, but this one is just so appalling.”

In August, Arlington administratively approved seven new wells at the Rocking Horse drilling site near the municipal airport, a slew of new medical offices, a preschool and homes. Richard Gertson, the city’s assistant director of planning and development services, said he understood public interest in the permits but the city council had already considered the issues at hand in 2013, when the original permit was issued.

“All of those issues were taken into account, and in a way, it’s been asked and it’s been answered,” Gertson said. “It’s always possible that subsequent to that approval, new land uses come in and locate at other distances but the drill zone, once established, has gone through that process already.”

The new status quo has not deterred Bhandari from collecting and sharing information about upcoming gas well permits. But while opposition is stronger and more organized than during the Barnett Shale boom in the late 2000s, she and Wilson both admit that most Texans do not share their concerns about fracking and its impact on the environment. Wilson hopes to change that.

“You can still stand on any street corner anywhere in the U.S. and ask people if they’ve seen the invisible pollution from oil and gas and they haven’t,” Wilson said. “We’ve kind of changed the conversation, but not enough.”

Haley Samsel covers environmental issues, particularly those related to growth, for The Fort Worth Star-Telegram. This dispatch is part of a series called “O​n the Ground​” with Report for America, an initiative of The GroundTruth Project. Follow her on Twitter: @haley_samsel.

A version of this story appeared on USA TODAY on October 22, 2020