In search of common ground: How to avoid polarizing narratives in your reporting 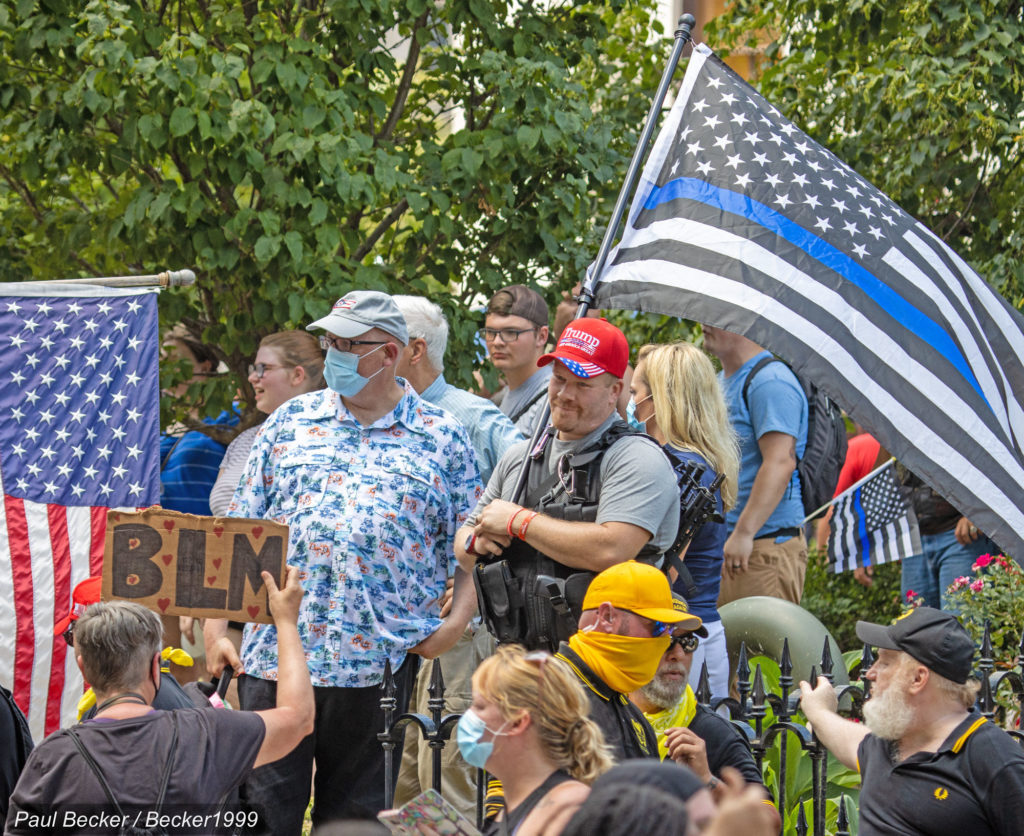 Protestors and counter-protestors face off at the Stand for America Counter-Protest at the Ohio Statehouse in Columbus on July 18, 2020. (Photo by Paul Becker/Flickr)

A person who sees someone of the opposite political party as a threat to their own identity, instead of as a fellow citizen, has created a form of sectarianism that, according to a recent study by the nonprofit Beyond Conflict, distorts how Americans view reality. The nation is facing “toxic polarization,” meaning there is a greater emphasis on difference in identity than on issues. How, then, can reporters stop exacerbating this gap and still report on the political news of the day?

In this Navigator edition, we spoke with Tim Phillips, founder and CEO of Beyond Conflict, a nonprofit that applies neuroscience to conflict reduction in order to increase tolerance and positive social change worldwide. We also spoke with Dr. Samantha Moore-Berg, a postdoctoral researcher in the Peace and Conflict Neuroscience Lab at the University of Pennsylvania, who partnered with Beyond Conflict on the study examining the psychological factors of polarization, “Understanding the Psychology that Drives Us Apart.”

Polarization in the United States is more an issue of perception than reality, according to Beyond Conflict’s study, which surveyed more than 3,000 Americans over nine months in 2019. The researchers found that Democrats and Republicans believe that members of the opposite party dehumanize, dislike and disagree with their own party twice as much as they actually do. This misconception can lead to the perpetuation of polarization, only increasing the divide between parties.

When GroundTruth asked Moore-Berg what role the media can play in de-escalating this left-right divide, she said that exposing audiences to the similarities rather than the differences between parties has an impact. “The more you tend to be exposed to media that doesn’t promote differences and actually promotes more similarities, we see that’s actually really impactful at reducing polarization,” she said.

We live within our “bubbles” of separation, said Phillips – whether that be by geography, cable television, the social media we consume or who we socialize or spend time with. “And so we [end] up thinking about others, defining our view on others, based not on direct contact, but on what we think they think, and who defines what they think they think? It’s not direct contact, it’s not conversations with people, it’s what they’re hearing in these bubbles.”

Because we often are exposed to those who think differently through the media and not face to face, it’s important that journalists do not focus only on the most extreme voices of a story. To leave out those that might have other points of view can make people believe all of their opponents have the same views, limiting the possibility of dialogue or even contemplating the idea of finding common ground, said Moore-Berg.

Former President Barack Obama’s legacy took a hit from the focus on the extreme critics of the Affordable Care Act. PolitiFact’s 2009 “Lie of the Year” was former Governor of Alaska and GOP vice presidential candidate Sarah Palin’s “death panel,” a term she coined in a Facebook post on Aug. 7, 2009 that claimed the government would have boards that determined if the elderly or people with disabilities deserved healthcare. At the time, the Affordable Care Act was still being written, and Palin’s baseless assertion sparked fierce opposition to the law from the GOP, according to Don Gonyea at National Public Radio, who called the disinformation “an early form of fake news.” Anita Dunn, who was the White House Communications Director from April – November 2009, told Gonyea in January of 2017 that because of the early debate around the law, people don’t know what is in the bill nor the benefits they have received. The focus on the extreme partisanship of the law set the tone for the ongoing divisiveness of ObamaCare.

Phillips recommends to consider the impact of your story and its possible reach. “An ‘us versus them’ sort of story may actually do harm, rather than constructing a different way that I think exposes people to views that they didn’t know, that was counterintuitive.”

Because the media plays a crucial role in not only defining our bubbles but helping us decide if we will look in someone else’s, journalists must ask what the future of the industry looks like, said Phillips. “To write, is it just context? An ‘us versus them’ sort of story may actually do harm, rather than constructing a different way that I think exposes people to views that they didn’t know, that was counterintuitive.”

Accessing stories that highlight this variability within political parties is challenging when President Donald Trumps’ rhetoric is what makes headlines, said Moore-Berg.

For example,the politicization of wearing a mask has been fueled by Trump, who claimed in mid-June that donning one was a signal of disapproving him rather than a measure to protect others. It seems impossible not to cover such a statement, but Phillips said this coverage drives the misperceptions about how polarized we really are.

A good starting point, said Phillips, is to focus not on what people think, but how they think.

“If we’re going to be writing, particularly in a polarized moment about deep emotions, it seems it’s coming upon all of us and particularly journalists to say, ‘Alright, how are people processing and thinking in a highly polarized environment? Is it just what they say on the surface? Or is there something else shaping how they think?’” said Phillips.

In a hyper-polarized environment, people cling to their group’s identity to feel safe, creating a bubble, and any information that contradicts the narrative of their group is perceived as a threat, said Phillips. It is factual to report on what people say or their behaviors, he explained, but how can journalists further analyze the history of a community’s narrative and how that narrative is shaped? What trauma went into molding that narrative? How have people responded?

“What is it to a journalist who’s covering all that? I think there’s no easy answer right now,” Phillip said. “But I think it’s learning about the people we’re covering as much their interior selves as it is their exterior self,” he said.

Journalists must combat polarization not only in the writing process, but also in the interview process. Phillips said to consider these questions ahead of an interview: “Am I asking a question in a way that’s triggering a really bad response? Or am I asking a question a certain way that really begins to reveal and unpack something in a way people hadn’t thought of?”

Phillips recalled a November 2017 MSNBC interview where host Joy Reid spoke with a conservative minister who was in support of Roy Moore, an Alabama GOP Senate candidate at the time, who had been accused of sexual misconduct involving teenage girls. Reid’s tactic of calling out the hypocrisy of being a Christian pastor who endorses a politician with moral charges against him was the standard of journalism practice, but was it effective? Phillips cites the work of Emile Bruneau, a research scientist who directs University of Pennsylvania’s Peace and Conflict Neuroscience Lab. He conducted a study on exposing hypocrisy and lessening collective blame of Muslims for individual acts of violence, which demonstrated that while revealing hypocrisy can reduce prejudice, weaponizing it against someone will only bring defensiveness. Phillips saw this with the minister who only retracted from the conversation while more deeply defending Moore as Reid questioned him.

As a counterpoint, Phillips mentions an interview in which a journalist asked a young man if he thought people are born gay or if being gay is a choice. When the man answered that he believed it was a choice, the interviewer then asked, ‘When did you choose to become straight?’ to which the man then seemed to consider opening up to another viewpoint.

“It’s something as simple as that that got somebody to think very differently about an issue,” said Phillips.