ON THE GROUND IN SAN FRANCISCO, CA

In San Francisco, voters to decide if noncitizens can serve on city boards 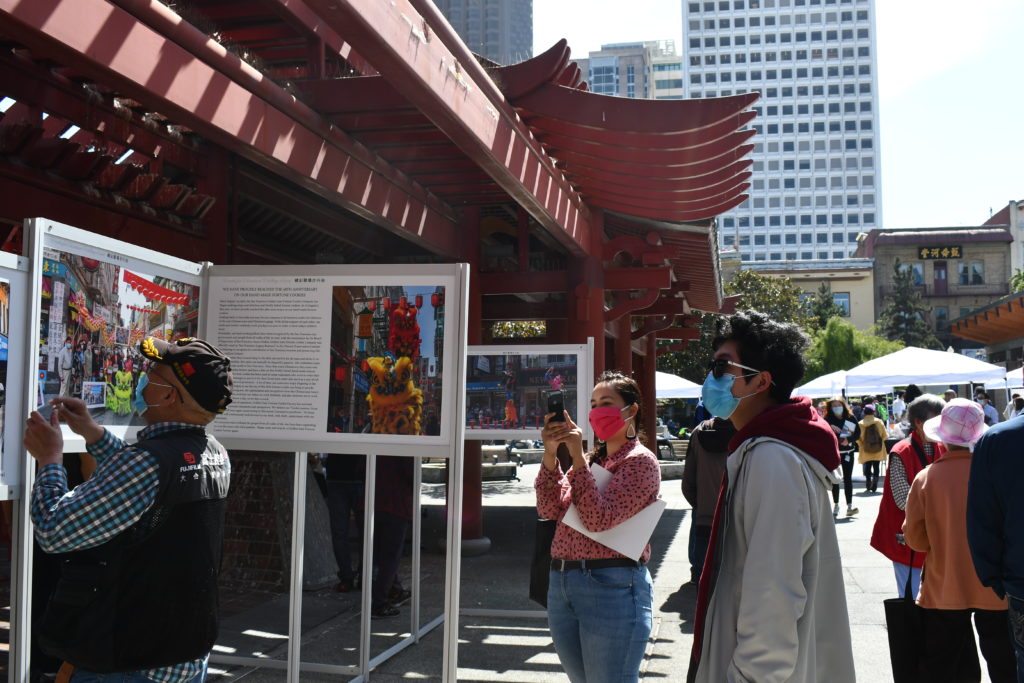 Sarah Souza snaps a picture of the newly installed photos and information to help increase visibility for the 2020 Census. Meanwhile, hundreds of Chinese residents line up to register for the census in the popular Portsmouth Square in Chinatown. (Photo by Annika Hom/GroundTruth)

SAN FRANCISCO — In 2006, amid the typical post-New Year’s frenzy at Pier 39 — kids spinning on the carousel, the smell of fresh chocolate wafting from candy shops — Immigration Customs and Enforcement officers disrupted the scene. Sarah Souza, then 19, watched on the Spanish-language news channel as agents arrested undocumented workers, burdened with the knowledge that her uncle worked there.

Then the image on the screen changed to a picture of her apartment building near Geary Boulevard; agents had learned her uncle lived there. Her uncle’s friend, who had escaped the round up at Pier 39, called Souza and her mother to warn them agents would soon be at their door.

The mother and daughter, undocumented Brazilian immigrants living in a one-bedroom apartment, fled. A friend moved their belongings to the basement of the mother’s employer, where they would live for six months.

Souza recalls this “frightening” time as her catalyst into political activism.

“They treated them like animals,” Souza said. “After that, I had a calling to fight against the system.”

Souza now works as an administrative aide at City Hall and leads a local nonprofit that offers social and legal services to low-income Latino immigrants. Her latest role is spearheading one of the more controversial propositions of the upcoming local election: Prop C.

The proposed City Charter amendment would allow noncitizens — including green card holders and undocumented residents — to serve on all city commissions and advisory boards. If it passes, San Francisco will be the first major city in the country to grant noncitizens this ability.

In San Francisco, 35% of residents are foreign-born, hailing from China, the Philippines, Mexico, El Salvador and other countries. Of these, 13.6% are noncitizens, according to Census data, and approximately 35,000 are undocumented.

Currently, only citizens may serve on certain city commissions — including the Immigrant Rights Commission — which craft budgets, advise the mayor and introduce legislation. This prevents representative diversity of the “progressive” sanctuary city, Souza argues, and Prop C is a step toward achieving equity.

“We have the lived experience and understand those barriers,” Souza said of the value of an undocumented voice on the Immigrant Rights Commission. “We need political representation, especially when we are facing unprecedented challenges.”

During the pandemic, immigrants have been among the hardest hit, prompting city leaders to partner with immigrant groups and distribute funds for undocumented residents who did not qualify for federal unemployment or other assistance. They created grassroots testing for Latino residents, who contracted COVID-19 at a disproportionate rate citywide.

Another place for noncitizens to contribute to reform is on the Police Commission, said Gabriel Medina, a citizen and the co-leader with Souza of the campaign and fundraising for Proposition C. The commission holds disciplinary hearings when there are charges of police misconduct.

Activists point to two incidents within the past five years in advocating for noncitizen representation in those hearings: The fatal police shootings of undocumented Mexican immigrant Luis Góngora Pat and Guatemalan immigrant Amilcar Pérez-López in the Mission District.

All 11 members on San Francisco’s city council and legislative branch, known as the Board of Supervisors, have voiced support for the amendment. The supervisors have, in the past, supported other noncitizen propositions like Proposition N in 2016, which allowed noncitizen voting in school board elections. While two prior attempts failed, voters passed Prop N by a 54% majority.

Ivy Zhou, a Chinese immigrant active in school board politics, naturalized in 2016 and will vote for Proposition C.

“As residents of San Francisco, you should have the ability to participate in the decision making process,” Zhou said through a translator.

Prop C is a clear next step to the proposition’s sponsor, Supervisor Shamann Walton, who represents predominantly Black and Asian communities in southeast San Francisco. Walton said the thousands of immigrants living in the city hold stakes in politics regardless of immigration status: noncitizens pay taxes, operate and shop at businesses and enroll their kids in local schools.

“In San Francisco, we’re about being inclusive in the political process,” Walton said. “There’s no better way to have folks be represented than to serve in leadership positions.”

And Souza serves as an example. Now a nearly 20-year resident of San Francisco, she is the first Deferred Action Childhood Arrivals recipient to be an aide to a San Francisco supervisor, Aaron Peskin. Peskin represents District 3, which encompasses Chinatown and the Italian enclave of North Beach and has a 41% immigrant population.

Souza said her background compelled her to tackle a citywide effort to get more immigrants to fill out the Census, especially because undocumented immigrants are historically undercounted due to mistrust of the government and fear of deportation. So far, the initiative has increased Census participation by 7 to 10%, according to the Office of Civic Engagement and Immigrant Affairs.

“I don’t know if there has been a commission that I haven’t wanted to put Sarah Souza on,” Mission District Supervisor Hillary Ronen said at a virtual town hall for Prop C.

But Souza doesn’t want to stop there. She wants to eventually take a seat on the Immigrant Rights Commission, despite being barred from the commission as a noncitizen.

And local Republican leaders think that’s fair. They disagree with Prop C’s inclusion of “non-legal residents,” asserting political leadership should be for citizens and legal residents.

John Dennis, chairman of the San Francisco Republican Party, called it “ridiculous,” and “another loopy idea of the Democrats.”

San Franciscans echoed this sentiment in the past. The Board of Supervisors — which included current Gov. Gavin Newsom — unanimously supported an identical proposition that was struck down by 68% of voters in 2002.

But that was nearly two decades ago. Souza believes this is the “moment in history” when immigrants can increase political representation.

“We want to strengthen our democracy. We must encourage each other to serve,” Souza said.

Annika Hom covers inequality for Mission Local. This dispatch is part of a series called “On the Ground” with Report for America, an initiative of The GroundTruth Project. Follow her on Twitter: @AnnikaHom.

A version of this story appeared on USA TODAY on October 8, 2020