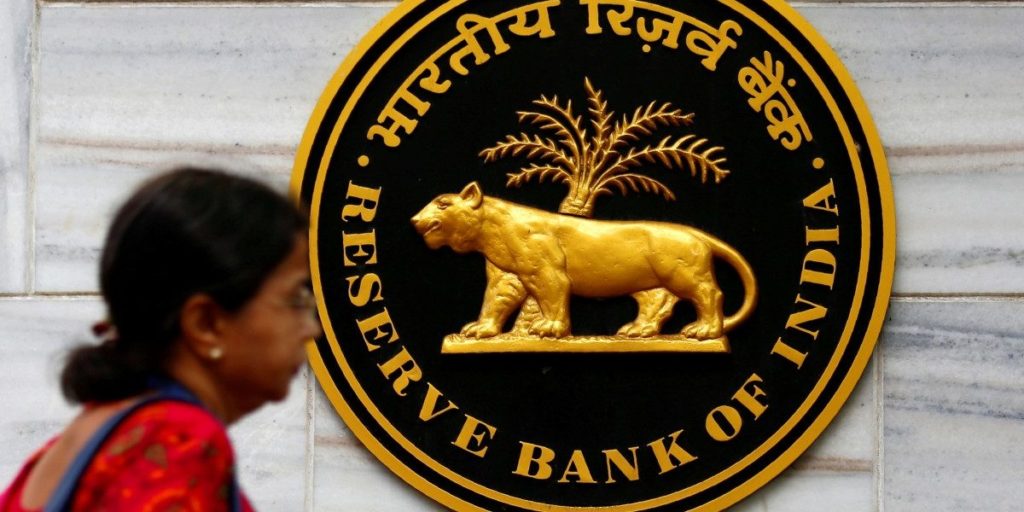 A woman walks past the Reserve Bank of India (RBI) head office in Mumbai. (Photo by: Shailesh Andrade/Reuters)

New Delhi: A clutch of Indian states, as per a recent Reserve Bank of India (RBI) report, are displaying worrisome signs of economic deterioration and considerable fiscal vulnerability.

These signs “warrant a careful assessment” given the ruinous economic developments in Sri Lanka, according to the central bank.

The IMF defines fiscal vulnerability as a situation where a government is exposed to the possibility of failure to meet its aggregate fiscal policy objectives and longer-term fiscal sustainability. In its analysis, the RBI has identified several high-stressed states by employing a number of fiscal vulnerability indicators.

Going by the debt to GSDP ratio, Punjab, Rajasthan, Kerala, West Bengal, Bihar, Andhra Pradesh, Jharkhand, Madhya Pradesh, Uttar Pradesh and Haryana turned out to be the states with the highest debt burden. These 10 states alone account for half of the total expenditure the state governments incurred.

What’s more, their GFD:GSDP ratio was equal to or more than 3% in 2021-22, not to mention the deficits in revenue accounts further adding to the worsening economic condition of the states. Lastly, for eight of these ten states, the interest payments to revenue receipts ratio (IP-RR), a measure of the debt servicing burden on the state’s finances, was more than 10%. 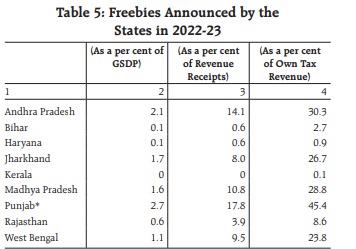 The freebies train chugs on

One economic policy that has been identifiably adding more and more strain onto rickety economic frameworks of various states is the predisposition of the state governments to dole out subsidies and freebies during normal times via supply chains riddled with inefficiencies and leakages, which consequently result in market distortions.

Andhra Pradesh, Madhya Pradesh and Punjab, for instance, incur a very high subsidy bill by doling out freebies that go over and above 10% of their total revenue receipts. The three states respectively give away freebies worth 14.1%, 10.8% and 17.8% of their revenue income. Gujarat and Chhatisgarh also spend over 10% of their revenue on giving away subsidies to their citizens. For states like Andhra Pradesh and Punjab, already battling the scourge of heavy indebtedness, freebies are hollowing out the state government’s coffers from the inside as the dole out is steadily inching up to more than 2% of the GSDP. 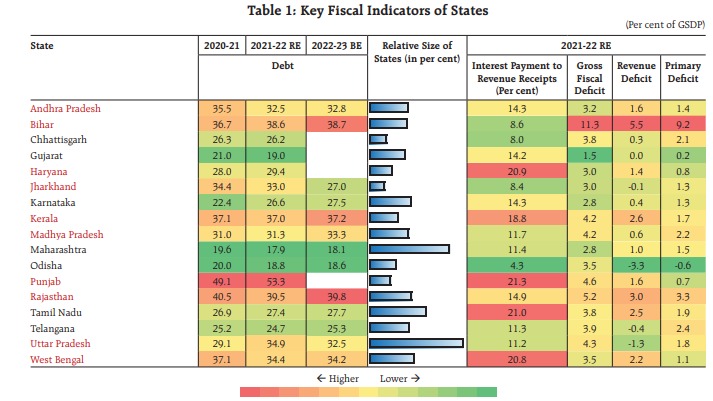 Other states – Jharkhand, Kerala, Telangana, Odisha and Uttar Pradesh – are also giving in to the political appeal of giving away freebies. The politically convenient and fiscally excoriating subsidy policy is starting to reflect in the budgets as these states have registered the largest rise in subsidies in the last three years.

The power sector has been the proverbial albatross around the neck of several state coffers. The gargantuan debt profiles of the DISCOMs have been in the making for decades the blame for which lies largely with the political leadership, both past and present. A long-winded populist policy of giving away power at subsidised rates has led to an artificial depression in electricity prices in the farm and household sector while ratcheting up subsidy power bills to unsustainable levels for the states.

Over the years, a number of rescue schemes for the power sector have been introduced, starting with the first bailout episode in 2003, when the state governments decided to wipe out outstanding dues of State Electricity Boards to Central Power Sector Undertakings through the issuance of power bonds. In the second instance, the state governments had to undertake a Financial Restructuring Plan in 2012 to enable DISCOMS to meet their short-term debt obligations. The third and most ambitious of the three bailouts was the Ujjwal DISCOM Assurance Yojana piloted under the BJP in 2015, which mandated that state governments will have to take over 75% of outstanding liabilities of DISCOMS. 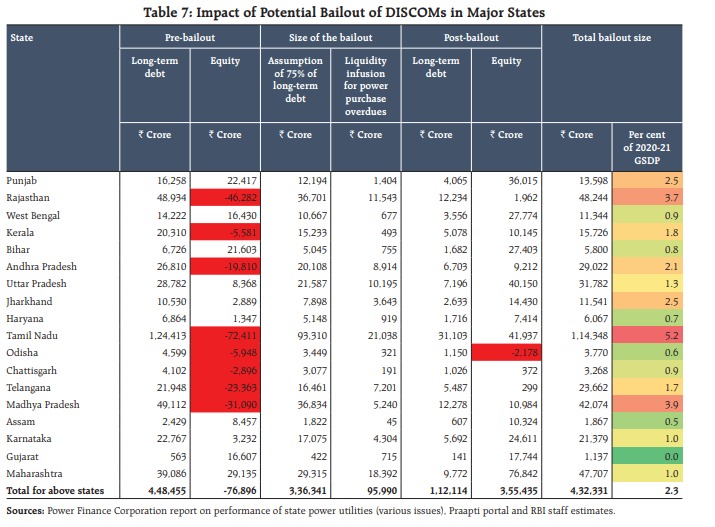 However, all these schemes while soaring loftily in the beginning, came crashing down hard soon enough. Meanwhile, the performance of the DISCOMs has remained weak, with their losses surpassing the pre-UDAY level of Rs 80,000 crore in 2018-19.

The RBI report runs a scenario accounting for a hypothetical scenario where another rescue package for the DISCOMs is implemented again. The report cautions that the rescue package will involve a “substantial financial burden” for the states. The report puts the cost of a bailout for 18 major states at 2.3% of the GSDP while qualifying that there could be significant variations between the states.

“For instance, if: (i) 75 per cent of the long-term debt of the DISCOMs (as at end-March 2020) is taken over by the state governments (similar to UDAY); and (ii) the states infuse liquidity (in the form of equity) into the DISCOMs to the tune of overdue outstanding to the GENCOs as of April 2022, the burden on the exchequer will be significant. For the 18 major states, the cost of the bailout will be 2.3 per cent of their combined GSDP, though there are significant differences amongst states. Tamil Nadu, Madhya Pradesh, Rajasthan and Punjab are most vulnerable to a possible bailout while Gujarat, Assam, Haryana and Odisha are relatively insulated from this risk.”

As per the RBI report, between 2021-22 and 2026-27, the debt to GSDP ratio is projected to moderate because of the stellar fiscal performance of a few states like Gujarat, Maharashtra, Delhi, Karnataka and Odisha.