A 20-hour train ride through the Sahara Desert 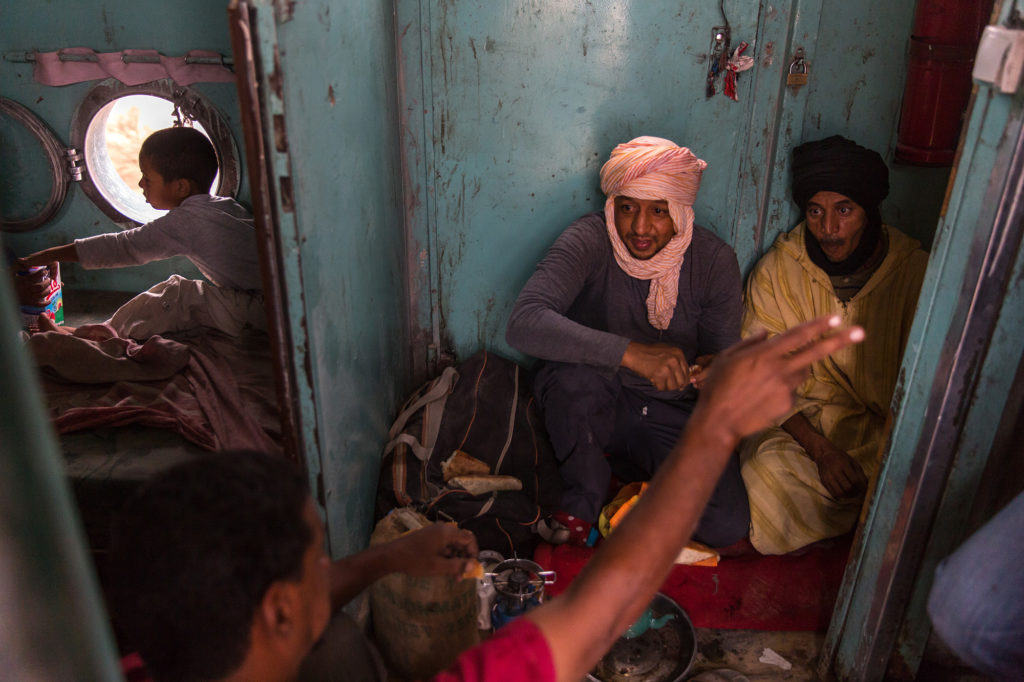 SNIM employees, who travel on special reserved coaches, talk in Arabic dialect while they lunch on September 30, 2015. It is custom in the desert to share food and water with the other travelers. (George Popescu/GroundTruth)

Passengers often ride on top of the train cars transporting iron ore across the Sahara desert, from the mine at Zouérat in northern Mauritania to Nouadhibou harbor on the Atlantic coast of Africa.

The travelers, usually traders transporting food and live animals, have to endure strong winds and temperatures that can reach up to 122 degrees Fahrenheit (50 degrees Celsius) in the summer. The 20-hour, 435-mile train journey through the Sahara is like being inside a washing machine – shaky and noisy with doors banging off their hinges all the time. Even if you’re lucky enough to have a bed, it’s hard to fall asleep.

People who travel for free in the empty wagons await sheep and donkeys to be loaded onto the train while they cook their lunch, play games in the sand, and prepare tea for the journey.

At the Zouérat open-cast mines, huge trucks transport the ore after extraction. It is then loaded into the train cars that can stretch for 1.5 miles. Then the train begins the trip to Nouadhibou harbor, on the Atlantic coast of Mauritania.

Along the way passengers bear witness to the stark, hauntingly beautiful landscape of the Sahara desert. There is a cacophony of sounds onboard the train, like the braying of donkeys, the roar of wind and sand, passengers speaking different languages, and the constant rhythm of the train rolling on the tracks.

When I went to the desert for the first time, I found a book made by a French photographer in the 1970’s. I remember he wrote on the opening page that once you’ve been in the desert, you will come back for sure – the desert calls you. For me, the Sahara is an amazing place to go; you can find yourself there.

Some of the photographic challenges I faced with this project were predictable, like keeping the sand from my lens and camera. It was a constant battle. The long dusk exposures on a moving train were hard to control as well. An image in the story that most epitomized the technical challenges was of three Muslim men praying Maghrib at sunset as the train rolled through the Sahara desert. It was shot at a seventh of a second, hand held with sand blowing across the right side of the frame. The image looks raw but it is full of truth.

George Popescu, is a freelance photographer and videographer based in Bucharest, Romania, b. 1980. He is a member of N-OST news agency that is based in Berlin, focused on Eastern Europe and ex-soviet countries. He  has been published in Frankfurter Allgemeine Zeitung, Spiegel, L’Express, CNN, Focus, NZZ.ch, Berliner Zeitung, TAZ, Wiener Zeitung, Die Wochenzeitung, and on Romanian magazines like Esquire, Decat o Revista, Vice.

He has worked as a videographer/cameraman for ARTE tv, ARD, Blue Cross International, Vice UK & World Animal Protection.  In  2013 he started a long-term project, documenting Jiu Valley, a mono industrial coal mining region in Romania:www.rasunavalea.ro(Romanian version) and in 2015 he received a first prize in the Lensculture Visual Storytelling Awards for the single image category.

George can be reached at poqe@poqe.com