ON THE GROUND IN ALBUQUERQUE, NEW MEXICO

In New Mexico, life and death flow at the pace of the Rio Grande 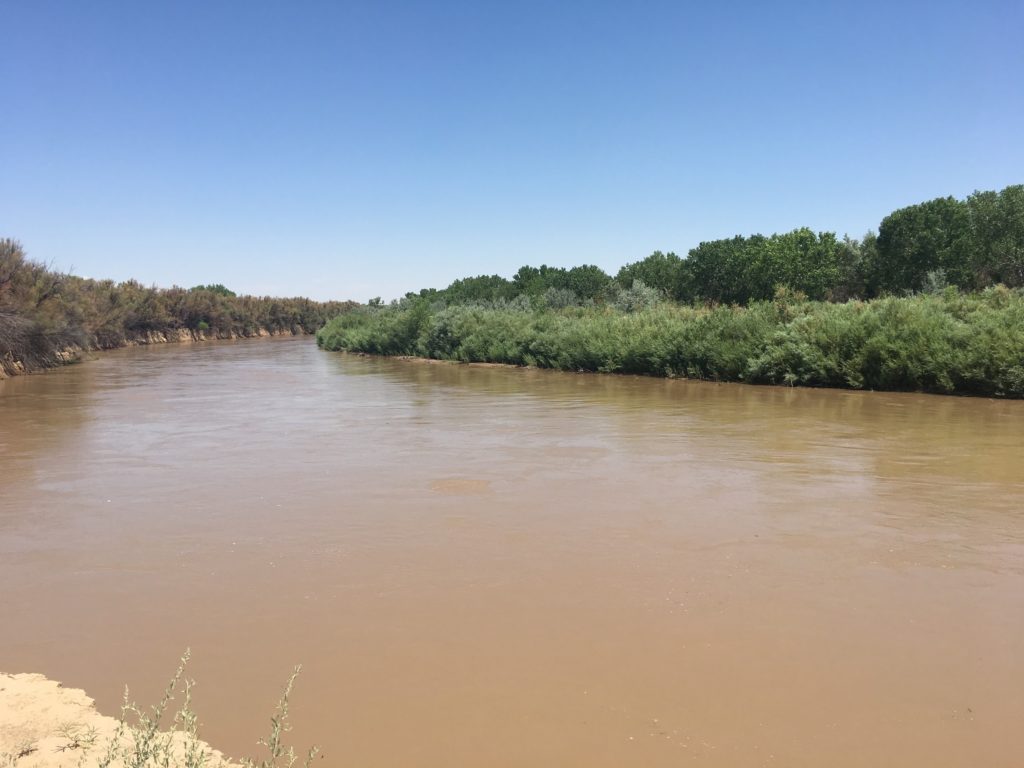 The Rio Grande in Socorro County, New Mexico, near Doris Rhodes’ property, about an hour south of Albuquerque. (Photo by Theresa Davis/GroundTruth)

Doris Rhodes knows that mantra well. She inherited a riverside property from her father about an hour south of the city more than a decade ago. The land, in arid Socorro County, is nestled against the Rio Grande. Sprawling along 629 acres on the east side of the river, where there are no levees, it is one of the few wetlands in the area.

At first, Rhodes had no idea what to do with her inheritance. The land was covered with invasive plant species that sucked up water and choked out wildlife. She considered selling it, but one early April morning changed her mind.

“It had rained, and there was now a lake on the north end of the property,” Rhodes says. “The geese were coming in. I looked at those geese and at that water and said to myself, ‘Lakes don’t just pop up out of nowhere in New Mexico. You can’t sell this land.’”

That was in 2006. Ever since, Rhodes has used her riverside property as a refuge for endangered plants and animals; she has helped restore river habitat for the southwestern willow flycatcher, the Rio Grande silvery minnow, the yellow-billed cuckoo and the Pecos sunflower.

“It’s rewarding to carve out a natural space on the Rio Grande where all species can thrive,” she says.

Water use impacts every walk of life

Water in the West — especially in arid New Mexico — is scarce. The Rio Grande begins in Colorado and flows 1,900 miles before reaching the Gulf of Mexico. It is a critical source of water for the vast deserts of the state.

People here know where their water comes from. They pay attention to the water levels of the Rio Grande, which is often called a “feast or famine” river. Years with lots of snow and runoff mean the water will run fast and high for most of the summer. But in other years, parts of the river will slow to a trickle. Last year during a historic drought, stretches of the Rio Grande went dry as early as April, which is nearly unprecedented.

That makes water valuable, which means everyone has an opinion on how best to use it.

I cover water and environmental issues for the Albuquerque Journal. Nearly every water-related meeting I’ve attended as a reporter has drawn people from all walks of life.

Politicians in their carefully pressed suits sit next to farmers and ranchers in wide-brimmed hats, who sit next to tribal leaders representing the oldest water rights holders in the nation.

I’ve been reminded several times — even by Rhodes herself — that the Rio Grande means different things to different people.

To farmers and ranchers, it’s how they make a living. Their crops and livestock depend on that lifeblood flowing through New Mexico.

To residents of the state’s 19 pueblos, the river is a sacred resource that has supported their people for hundreds (if not thousands) of years.

To politicians, the river is a measuring stick for how they are responding to increasing water demand amidst a global climate crisis.

To conservationists like Rhodes, the river is a refuge for threatened plants and animals.

They all care about the Rio Grande. Their different water interests aren’t always at odds. The lines blur, which is what makes water issues in this county — and state — so complex.

I visited Rhodes in Socorro County to learn about her conservation work. We bounced around the dirt roads on her land in a pickup next to the muddy river while she talked about her love for the Rio Grande.

Rhodes feels like she has been given stewardship over this stretch of the river. She protects the water and the wildlife that call the river home.

Historically, the Rio Grande moved slow and flooded often. Now the river is confined with man-made dams and levees to prevent flooding. That makes it flow faster, which is not ideal for the tiny silvery minnow, an endangered species that thrives in a slow-moving river habitat.

Rhodes worked closely with the U.S. Bureau of Reclamation to create an ideal river habitat for the silvery minnow. The groups lowered the riverbank to make an area where water moves slow, which is ideal for the small fish.

“We’re returning the river back to its natural state here,” Rhodes says. “Not everyone has a chance to do that.”

Mary Carlson, a public affairs worker who worked with Rhodes, says the Bureau of Reclamation and other federal agencies in charge of preserving the Rio Grande and delivering water to the region have been dealing with water scarcity for a long time.

“We work together with everyone when things are bad,” Carlson says. “And in these good water years, we try to make the most of it. It’s always a roller coaster ride with the Rio Grande.”

Water is life. And here in New Mexico, the Rio Grande is the state’s beating heart.

Theresa Davis is a Report for America corps member, covering the environment for the Albuquerque Journal in Albuquerque, New Mexico. This essay is part of a GroundTruth series called “On the Ground,” featured in USA Today. Follow her and Report for America on Twitter @theresa__davis  – @Report4America