In Eight Years of Modi’s Rule, Eight Hits and Misses by the Health Ministry 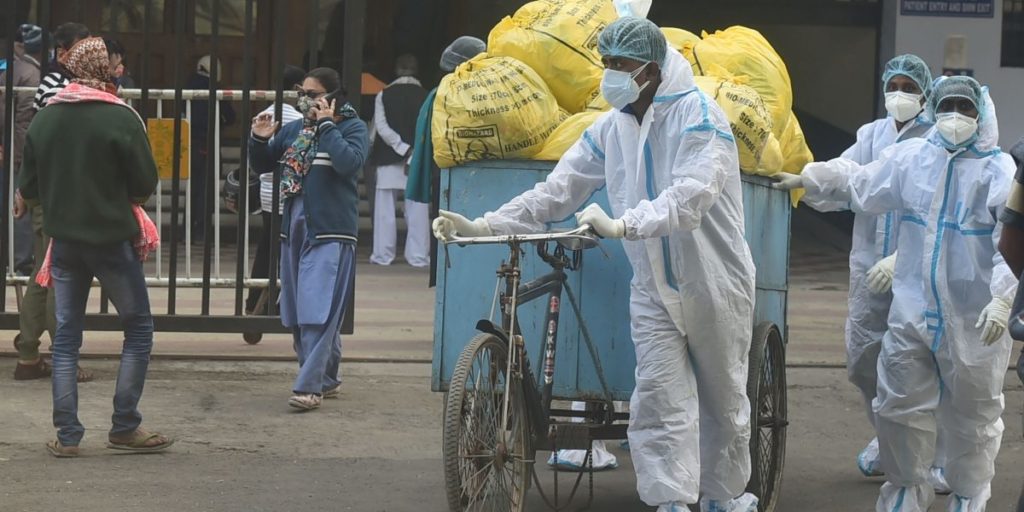 New Delhi: When the Narendra Modi-led Union government marked eight years in office in May, its various ministries launched a veritable social media blitzkrieg to highlight achievements. Among them was the health and family welfare ministry – one that has had particular reason to occupy headlines in the last few years.

The key ministry could, indeed, achieve some of the promises it had made. Others, it failed to fulfil.

Here is a list of some of the most important targets the ministry missed.

The Union government announced in the Union Budget 2017-18 that Kala-azar (Visceral leishmaniasis) will be eliminated by 2017. That is, there would be less than 1 case per 10,000 people at the block level.

Such cases have definitely gone south, but the disease is far away from elimination. According to the National Centre for Vector Borne Diseases Control (NCVBDC) of the Union government, 1,267 cases of the disease were registered in 2021.

Another 1,345 people got twin infections of Kala-azar and HIV. More than 90% of the cases come from Bihar while a few come from Jharkhand, Uttar Pradesh and West Bengal. A revision in the deadline – December 2020 instead of 2017 – given by this government has already gone.

Filariasis is another disease that this government wanted to eliminate by 2017. The NCVBDC does not give the latest case count. Till 2016, 8.7 lakh cases were registered. However, it says the disease is still prevalent in 258 districts of India.

The latest deadlines for elimination of Kala-azar and filariasis now stand at 2023 and 2030, respectively.

Leprosy, the government  had said in the same Budget, would be eliminated by 2018. But that also did not happen, despite some progress.

One of the most ambitious targets of this government was tuberculosis elimination by 2025. The government came out with a ‘National Strategic Plan’ to this effect in 2017. It aimed to reduce TB prevalence in India to 142 per 100,000 people by 2020, from a baseline of 217 in 2015 as an interim target.

However, the TB prevalence survey released recently said its prevalence among India’s adults was 312 per 100,000 between 2019-2021 – clearly much higher than what was the interim aim. This, coupled with several other reasons, experts told The Wire Science earlier, would make it nearly impossible to achieve TB elimination by 2025.

One of its targets was to decrease anaemia prevalence in children and adolescent girls by 3 percentage points per annum. But anaemia instead increased over years.

According to the National Family Health Survey (NFHS)-5, which was conducted between 2019 and 2021, anaemia in children increased from NFHS-4 period (2015-16). As such, Bihar, Madhya Pradesh, Rajasthan and Uttar Pradesh reported an increase by 3.2, 2.2, 7.6 and 2.4 percentage points, respectively.

All women aged 15-49 years also reported a rise in anamedia levels in these states from NFHS-4 to NFHS-5 periods. The Abhiyan also envisaged bringing down stunting from 38.4% in NFHS-4 period to 25% by 2022. However, as per the latest NFHS-5, the stunting stands at 35.5%, actually. By next year, it will have to be reduced by as high as 10 percentage points – which is an impossible target considering the pace of reduction in the past several years.

The National Health Policy 2017 envisaged that the health expenditure by the Union government as a percentage of GDP would go up to 2.5% by 2025.

Given this extremely constrained spending on health, experts say, it is highly unlikely India would meet the target.

Incidentally, India is the country where out-of-pocket expenditure (people spending on their own) on health, is one of the highest across the world. And this is pushing millions into poverty every year. Despite announcing several health schemes, the far less-than-adequate health spending is not only going to lead to another missed target for this government but is also not going to serve people in the long run.

Prime Minister Narendra Modi declared on October 2, 2019, that India had become “open-defecation free”. This was the result of the Swachh Bharat Scheme that the government had launched, he claimed.

But now the recently released NFHS-5 says open defecation is still very much a norm in the country, “Nineteen percent of households do not use any toilet facility, meaning that they practise open defecation,” it says.

There is not a single state or Union Territory, except for Lakshadweep, where 100% of the population has access to a toilet, says NFHS-5.

In Odisha, Jharkhand and Bihar, for example, more than 30% people don’t own a toilet. Among rural populations, there are states like Bihar where only little more than 50% have access to a toilet. Among the various wealth quintiles of the country, as many as 49% belonging to the lowest one are defecating in the open, says the NFHS.

One of the most touted schemes of the Narendra Modi government when it came to the health sector is Ayushman Bharat. One of the two verticals of this scheme is to establish ‘health and wellness centres (HWCs)’, especially to cater to the rural population. As per the budgetary announcement of 2017-18, the aim was to convert existing health sub-centres (SCs) and primary health centres (PHCs) into 1.5 lakh HWCs by the end of December 2022. Sub-centres are in the lowest rung of the healthcare hierarchy in rural areas. They are followed by primary health centres and community health centres.

As on December 14, 2021, 80,764 HWCs have been operationalised. That is, only half of the target was achieved in three years with one more to go to achieve the other half. Also, the shortfall of key human resources is another issue ailing the HWCs.

According to the latest Rural Health Statistics released for 2020-21, there is a shortfall of 10,691 lab technicians at PHCs. There is a lack of staff nurses in some of the big states. Uttar Pradesh, for example, is short of 1,429 nurses and Odisha, by 1,008. The absenteeism rate of doctors at PHCs has also marred their functioning in full capacity, something that has been reported empirically as well as through the government reports.

The entire aim of coming up with HWCs was to better the healthcare system in rural areas. Community health centres are the places where rural people go for specialist care as PHCs and SCs are not supposed to offer that.

CHCs, meanwhile, are bleeding from a shortage of specialists. The Rural Health Statistics say there is a shortfall of 83.2% of general surgeons, 74.2% of obstetricians and gynaecologists, 82.2% of general physicians and 80.6% of paediatricians. In other words, people at the periphery still might have to travel hundreds of kilometres to get a simple consultation.

Arguably, the worst tragedy of India’s independent history happened in the form of COVID-19 in 2021.

There was no other occasion when the government looked as hapless as it did back when the second wave of the novel coronavirus struck India. From hospital beds to medical oxygen and drugs, people were left scrambling for essential medical services. The government’s hand was nowhere to be seen and India touched new records of daily cases and daily deaths every day between May and June 2021.

All of this was playing out just a couple of months after Prime Minister Narendra Modi had announced to the world in January 2021 at the World Economic Forum that India had successfully “defeated” COVID-19 and had proven all doomsday predictions wrong. It was not just this prophecy that went horribly wrong, it also exposed the results of decades of neglect in planning healthcare for people.

Unprecedented misery was just one story of the pandemic management of India. The government’s decision making, especially on scientific matters, came under question mark on several occasions throughout this period. India’s COVID-19 vaccination drive started on a controversial note in January 2021 when experts flayed the government for giving go-ahead to a vaccine without an iota of clinical trial data. This high-handed decision-making continued when the government okayed drugs for treating the disease which did not even become part of its own treatment protocol. To date, the controversies surrounding the approval of vaccines, by not following the rulebook and bypassing bodies like National Technical Advisory Group, continue to be part and parcel of the government’s functioning.

However, the fact that more than 85% of the population of a country as big as India has received the vaccine till now is something that has been appreciated worldwide. Thanks to private manufacturers, the country has not faced a vaccine shortage, as such, after the government banned exports during the second wave.

There are two fronts where the government achieved the targets or came close.

The Modi government initiated the opening of Pradhan Mantri Bhartiya Janaushadhi Kendras where drugs are sold at cheaper prices.

In these stores, people are charged a maximum of 50% of the average price of the top three branded medicines of a drug. The product basket under the scheme comprises 1,616 medicines and 250 surgical items. They also comprise anti-cancer drugs.

According to a reply given in the Rajya Sabha this year, about 8,689 such stores exist all across the country in about 700 districts. But lack of awareness among people of these services, and at times, lack of sufficient checks on quality of drugs supplied have proven to be some of the bottlenecks in making this scheme achieve its potential.

In the 2017-18 budget, the late finance minister Arun Jaitley had also announced that the infant mortality rate (IMR), i.e, the deaths of children younger than one year per 1,000 live births had to go down to 28 by 2019.

Similarly, the maternal mortality ratio (MMR), i.e., the proportion of maternal deaths per 100,000 births had to decline to 100 by 2018-2020. As far as IMR is concerned, the government has achieved the target, according to a bulletin of Sample Registration System (SRS) released recently for the year 2020.

But the point to be noted is that there is a sharp disparity among the states. At least six states – Assam, Chhattisgarh, Madhya Pradesh, Odisha, Rajasthan and Uttar Pradesh – continue to have an IMR above the national average. These are, incidentally, the states that have been traditional laggards in this regard.

The MMR, according to the SRS bulletin of March 2022 released for the period 2017-19, stands at 103 – almost close to the target of 100. Here also, the widening gaps between the states appear as a matter of concern because the same six states mentioned above record an MMR that is higher than the national average.