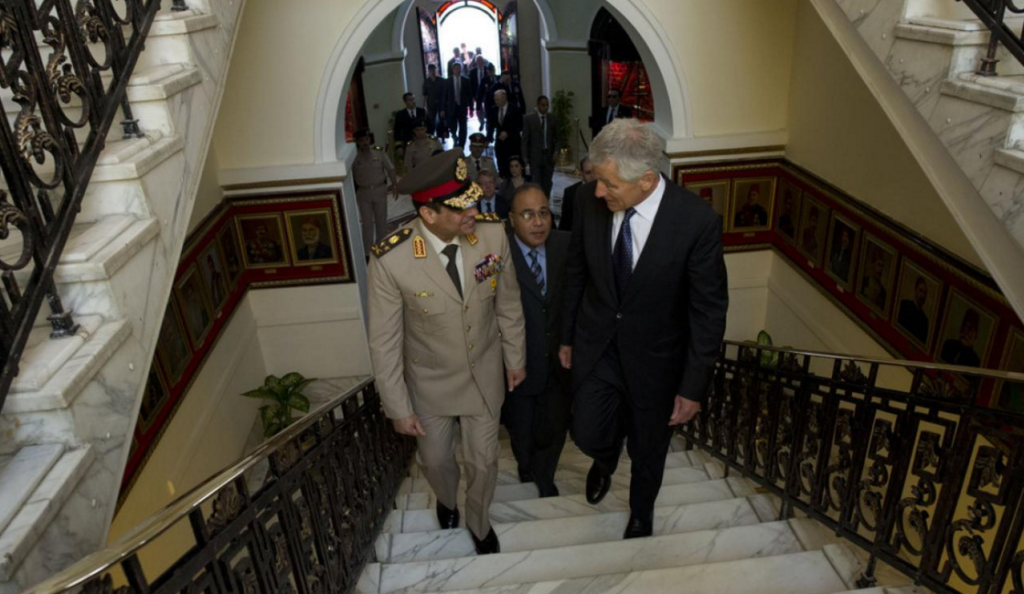 CAIRO — On a backstreet on the east side of this sprawling city, a ragged crowd chanted in unison: “The people demand the fall of the regime.”

The small group shouted vociferously, united by a desire to oust a repressive ruler and hasten Egypt’s progress to democracy. The “people” have been taking this demand to the streets a lot here in the last two and a half years.

On this Friday last week, the chants were not for the toppling of Hosni Mubarak, as the streets demanded in early 2011 after three decades of corruption and brutality. They were not directed to President Mohamed Morsi, who replaced Mubarak to become the first democratically elected president in the country’s history but was unseated in a military-led takeover after millions went back to the streets to protest failures of governance.

These protesters were directing their demands to step down toward General Abdel Fattah al-Sisi, the leader of a military coup that ousted Morsi, and the man who now presides as the military commander in an interim government.

Welcome to Cairo in 2013, where the people have had a voice in the street since Egypt’s popular uprising made headlines around the world. In a cover story this summer, Time magazine labelled them: “World’s Best Protesters; World’s Worst Democrats.”

Two years after hundreds of thousands of Egyptians revolted against the dictatorship of Mubarak, the country’s military-backed authorities, headed by the popular Gen. al-Sisi are accused of stifling dissent and overseeing what Human Rights Watch has labeled the “most serious incident of mass unlawful killings in modern Egyptian history.”

Yet unlike in 2011, protests against the authorities are small these days, like the gathering on Cairo’s east side. That’s because the majority of Egyptians seem to support the July 3rd coup, and see the sweeping and furious military crackdown as a necessary price to pay for democracy.

Egypt-watchers believe the army’s role in Morsi’s overthrow has rehabilitated the military’s reputation in the eyes of many Egyptians.

“There is a cult of personality around the head of the military now,” says Issandr El Amrani, a Cairo-based analyst and North Africa project director at the International Crisis Group. “The atmosphere is pro-military in a way that we simply did not see in 2011.”

Posters of Gen. al-Sisi’s face — sometimes smiling and fatherly and sometimes strong and silent with his signature sunglasses -— are plastered across Cairo. Many now want him to run for president.

“In 2011, the vast majority of people had a positive image of the army, but there was also a strong feeling that they should not be allowed to remain in power. Today there is a much wider acceptance of a forceful role for the military in politics,” says Amrani.

“This government is shaped into three cones: the security cone, the economy cone and the explicitly political cone,” says Amrani. “Although each operates fairly separately, it’s almost certain that General Sisi and the head of the security cone has veto power over the other decisions.”

And security has become the issue of the day.

On August 14, military and police forces forcibly dispersed two pro-Morsi sit-ins in Cairo, killing more than 600 in what Human Rights Watch has called “the most serious incident of mass unlawful killings in modern Egyptian history”.

Bloodshed in the capital catalyzed spasms of violence across the country. At least 1,089 people died in political violence between August 14 and 18.

The involvement of Islamists in the unrest has allowed the government to cast this as a ‘war on terror’, stoking fears that Egypt may see a return to the militant violence of the 1990s.

The resulting security crackdown has decimated the group’s organizational capacity, pushing the group underground. Its leadership is behind bars and up to 3,000 of its rank-and-file supporters have been arrested.

“I can’t see any of the leadership anymore, they’re all in jail” says Amr Darrag, one of the highest-ranking members of the Brotherhood’s political wing, the Freedom and Justice Party (FJP), to remain a free man.

Darrag says the detentions are politically motivated, presenting a convenient way to erase the group from political life. Although he denies any wrongdoing, he still fears waking up to a knock on his own door.

Revolutionaries who galvanized the original 2011 uprising now say that the police state they fought against is emerging from the shadows.

“I feel like we just stepped back two years,” April 6 movement co-founder Ahmed Maher told GlobalPost last week. “This is a major setback, it feels like the old regime is back again.”

His trepidation was justified. On September 11, the April 6 offices were raided without a warrant and a number of its activists detained. Although they were released without charge, the fate of Egypt’s most famous revolutionary group is now as uncertain as the Brotherhood’s.

Maher and other Egyptians who occupy a rapidly shrinking middle ground say they want to find a third political route way that does not involve the army or Islamists.

“We don’t agree with military rule, but we cannot back the radicals,” he said wearily. “But there is no alternative at the moment. I hope that one day Egypt can have a leader that will just look out for the country’s interests, and not just for those of his clique.”

Egypt’s military-backed interim government has promise to hold fresh parliamentary and presidential elections within six months. But the Brotherhood may not be involved, says Darrag.

“If they are serious about having elections, how can we get involved with most of our leaders and potential candidates in jail? It is very difficult to imagine any sort of free political activities in this context.”

Almost three years after Egypt’s 2011 uprising, activists could be forgiven for feeling that their revolution has come full circle.

But according to Maher, it’s not over yet.

“People ask if I have lost hope, and I haven’t,” he says. “I never imagined that things would reach this level of violence, of hatred and of complications. The situation is chaotic, a lot of people have died. But we have to hope.”