In Detroit, immigrants paint a rich tapestry of community and culture 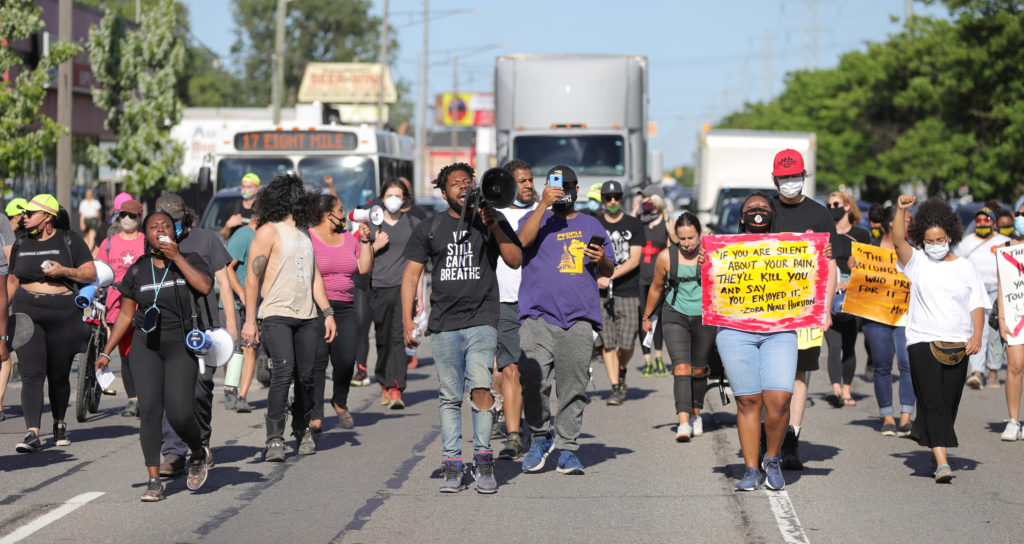 DETROIT — At the intersection of Dequindre Street and 8 Mile Road, the dividing line that separates the city from its predominantly white suburbs, a group of protesters recently marched against police brutality. They stretched to the horizon on the normally bustling street as neighbors stood on either side with their fists raised, chanting in support.

Eight Mile is a symbolic place in the minds of Detroit residents, who share a common past of housing disparities and redlining. The marchers joined the waves of civil unrest sweeping the nation, passing Motor City gas stations and auto repair shops along this historic stretch, home to more than 1,500 businesses.

It’s a time of change in Detroit, a city nearly 80% Black. The city still grapples with the effects of its postwar transformation, marked by racial discrimination, industrial decline, a bankruptcy and now a pandemic. Vibrant immigrant communities, whose residents originate from the Ivory Coast to Mexico, make up a working-class tradition forged decades ago. A collage of small businesses and hard-working neighborhoods, like the one where I grew up, sustain the continued fight for access to basic needs like housing and water.

National media often portray Detroit as a broken city with a dangerous reputation. But that narrative is far too simple and doesn’t speak to Detroit’s complex identity.

“There’s something special about the people of Detroit. From the streets of Detroit can come the salvation of the souls of America,” Lt. Gov. Garlin Gilchrist II recently told a crowd at a march with faith leaders protesting the death of George Floyd. “We’ve seen that every time people in Detroit have stood up, and have defined an example of leadership for the world to follow.”

To be from and report on Detroit is to address issues that most impact local lives through the lens of this identity. More than 36% of Detroit residents are under the poverty line, according to the U.S. Census. They face housing disparities and lack of access to basic needs. Communities of color have been disproportionately hit by a pandemic that has taken thousands of lives but also rocked the economy.

But to look deeper — into the history and identity of this city — is to see Detroit in its diverse communities scattered across 138 square miles. The voices of these neighborhoods are filled with character and grit and with residents weaving colorful threads into the tapestry of the city. My city.

Walking alongside protesters, seeing parts of my city that I’ve not before explored on foot, I’m reminded of its perseverance. A few miles south of 8 Mile, on Conant Avenue, a busy commercial strip is flanked by immigrant-owned groceries and clothing stores. Men in white walk to the mosque. People filter in and out of Bishr Poultry & Food Center, known for its cheap fried chicken. Families stand outside of Burk’s Igloo, the neighborhood ice cream shop, attempting to stand six feet apart in a growing line. This is my Detroit neighborhood.

It’s a community known for its immigrant population, especially people from Yemen and Bangladesh. Young men play cricket in the lot on Jayne Field, where a sign identifies the neighborhood as “Banglatown,” home to one of the highest number of Bangladeshi immigrants in the country. It borders Hamtramck, which once had a sizable Polish population, evident in the pierogis on a restaurant menu and the pews of St. Florian Church on Poland Street. Along Carpenter Avenue, which serves as a boundary between Detroit and Hamtramck, a large mural features a girl, wrapped in the Bangladesh flag, with water lilies in her hair.

The community is home to a large Muslim population, marked by the call to prayer. Before the pandemic, on Friday afternoons during the Jummah prayer, worshipers would crowd into the houses of worship, often halting nearby traffic. On Eid, empty lots would be filled with congregants who observe the traditional morning prayer. They’d walk back to their homes with prayer rugs under their arms to celebrate the rest of their day with neighbors and family.

My one-way street is canopied by large trees — a rarity in these parts of Detroit. Two-story bungalows dot the streets, the narrow spaces in between leading to backyard gardens. Alleyways are filled with overgrown greenery and old car parts. Children ride their bikes on uneven sidewalks and ice cream trucks roll through during summer days.

On my block, several empty lots mark where houses once stood. For some time after the houses burned, they stood empty and decaying. Grass now covers the lots. Neighbors grow vegetables, some native to Bangladesh, and sell them to the diaspora. Squash hangs from homemade trellises and chili peppers grow out of recycled containers.

It’s a family neighborhood, with uncles, aunts and cousins living close to one another. In the early morning, they pile into white vans, lunch boxes in tow, ride-sharing to factory jobs in the suburbs.

Many of the immigrants who live here work factory floors, like my dad, making parts for cars. My dad, who came to Detroit in the early 1990s from Bangladesh, worked in restaurants until he settled on the assembly line.

Neighbors he once knew saved their money and moved to the suburbs. For some, leaving the city is a marker of the American Dream, but not for all.

My family is one of a handful who are still here, in the city that put the country on wheels. For us and many others, Detroit is still a place to continue the American Dream.

Nushrat Rahman covers economic mobility for the Detroit Free Press. This dispatch is part of a series called “On the Ground with Report for America,” an initiative of The GroundTruth Project. Follow her on Twitter: @NushratR.

A version of this story appeared on USA TODAY on July 9, 2020