ON THE GROUND IN CHATTANOOGA, TN

Hit by COVID-19 and tornadoes, some Chattanoogans find strength in faith 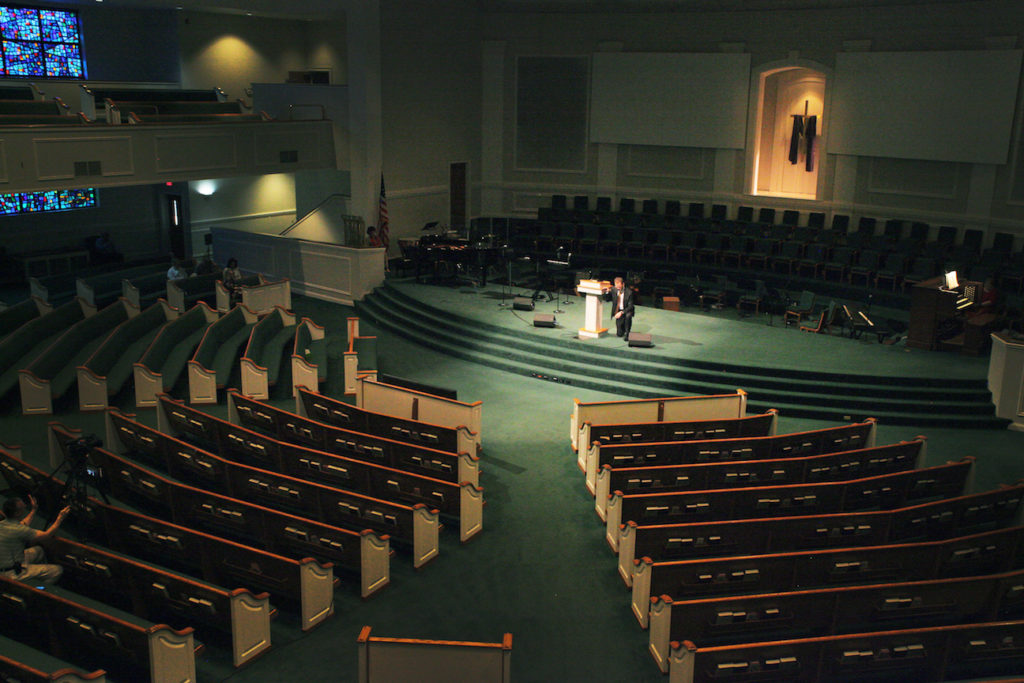 Pastor Doug Plumlee prays at the altar at Ridgedale Baptist Church in Chattanooga during a live-streamed service on March 15. The Baptist church shut down in-person services and directed people to watch online over COVID-19 concerns. (Photo by Wyatt Massey/GroundTruth)

CHATTANOOGA, TN – Nothing moves in Chattanooga without the churches. This is a region run largely by preachers at the pulpit, not politicians who win the polls. Tennessee Gov. Bill Lee knows this, and his executive orders to stop the spread of COVID-19 reflect it: Churches are essential.

In any other time of crisis, there come the churches. They set up tents to care for the poor and comfort the sick. They are the ones leading marches. They mobilize recovery crews and organize community meals. But, as we are all recognizing, these are not normal times and the institutions that hold together life in Chattanooga, and much of America, are searching for their footing during this pandemic.

In March, as COVID-19 hit the South in force and case totals rocketed upward, houses of worship were given considerable freedom from the governor to respond to the pandemic. Their response was a reflection of the varied opinions and leadership across the country. Some faith groups gathered until the last day they could. Others quickly shuttered their doors and promoted the strictest of social distancing measures, conducting services by video call.

Online, their posts offered different interpretations of similar scriptures — some pointed to the Bible saying faith is greater than fear, others pointed to the same gospel saying the rejection of social distancing was not caring for one’s neighbor. The people of faith moved themselves to the middle of the national debate about the threat of the coronavirus and the measures taken to stop it, their arguments as prominent in the community as those of local political parties.

It seemed almost inevitable then when the first confirmed case of COVID-19 in Chattanooga was the leading priest of a large downtown church. The next day, it was confirmed he came in contact with hundreds of people between when he was infected and when he went into quarantine.

Like the concert halls and restaurants across the city, official orders to practice safe distancing during the coronavirus halted attendance at Chattanooga’s houses of worship. Thousand-seat churches are empty on Sunday mornings. The sign outside Living Word Fellowship reads, “Services temporarily postponed. May God be merciful.” Shabbat services went on Facebook Live. And at mosques, the faithful no longer stand shoulder-to-shoulder at Friday noon prayer.

Easter came a month after the first local case and in that somber moment, pastors delivered a message of hope. The need seemed greater than it had ever been.

Then the tornadoes hit.

That Sunday night, a 145-mph tornado ripped through Chattanooga in a storm that killed at least 11 people in the area. As the rising sun brought into view the flattened houses and tossed-around mobile homes in North Georgia, I sat outside the scattered remnants of Charles Pritchett’s home of more than 50 years.

The next morning, I watched Donna Carter put what she could salvage from her kitchen into a box at her feet. A worn, maroon Bible sat on the debris-peppered counter behind her.

Unlike with the coronavirus, the destruction caused by this enemy was more visible across the landscape, seen in the miles of flattened neighborhoods and the erected memorials. A chaplain with the local fire department described the tornado as piling a disaster on top of disaster. A struggling region again beaten by an unforeseen calamity.

Yet, in these monumental moments of need, the community draws on its strength. The Hamilton County Baptist Association brought in a hundred people to put chainsaws to hundreds of downed trees from the tornado. The local mosque raised more than $9,000 to help families affected by the storm. Faith groups once more put aside questions about their own survival and put the needs of the community first.

At a time when people are being forced to grapple with questions of life and death, though, those who are trained in centuries of theological tradition can only reach their flocks through livestream. And the many fears faith leaders are guiding their communities through — the health risks, the economic toll, the indefinite feeling of isolation in this shared, long loneliness — are those they themselves carry.

“I feel the burden of trying to be a steady hand,” said Timothy Careathers, senior pastor at Westside Missionary Baptist Church. “They look at me for that, for direction and answers, when the reality is that I have the same questions that they have. I’m getting the news when they’re getting it.”

Ministries like Careathers’ face a daunting reality. While they are helping their communities cope with the terms of this crisis, there are concerns about how long they themselves can survive, working in overdrive to fill the gap caused by school closures and out-of-work families.

“Everybody is trying to [figure out] how their ends are going to meet,” Careathers, a nearly life-long resident of Chattanooga, said. “It’s a faith journey that we have never been on before.”

Despite pastoring Westside through the 2008 financial crisis, Careathers said that was nothing compared to the coronavirus pandemic. By mid-April more than 10% of Chattanooga’s workforce — at least 33,300 people — were unemployed because of COVID-19. His church continues to employ seven people and runs a nonprofit out of its doors to educate, clothe and feed members of the community.

Through both disasters — the pandemic and the tornado — come questions about why God would allow such a thing.

“The best thing is to, first, not to deny the bad things, not to pretend they’re not there or that they’re not hard,” Laura Becker, the pastor at Northminster Presbyterian Church, told me. “But they’re not the only thing. There’s space to let people lament and grieve and let hard things be hard but also to point them to the ways that this is a season. This is not forever. And that we’ve been through hard things before.”

As a young woman, Mother Teresa heard God’s voice clearly call upon her to start her religious order and minister to the poor. But the decades of her life that followed were filled with feelings of doubt, thoughts of questioning whether she would ever hear God’s voice again.

“God must be wanting this ‘aloneness’ from me,” she wrote.

Yet she never stopped working. She kept her head down, hoping the truth she knew then would be true for what was to come.

A similar message in the past weeks, a holding pattern in hope has echoed from the Chattanoga’s faith leaders. Stay inside, they say. We will get through this. The message is to hold tight to faith. Believe.

God’s voice feels so distant, yet there is much to do.

Wyatt Massey covers faith and religion for the Chattanooga Times Free Press. This dispatch is part of a series called “On the Ground” with Report for America, an initiative of The GroundTruth Project. Follow him on Twitter: @News4Mass.