ON THE GROUND IN THE CENTRAL VALLEY 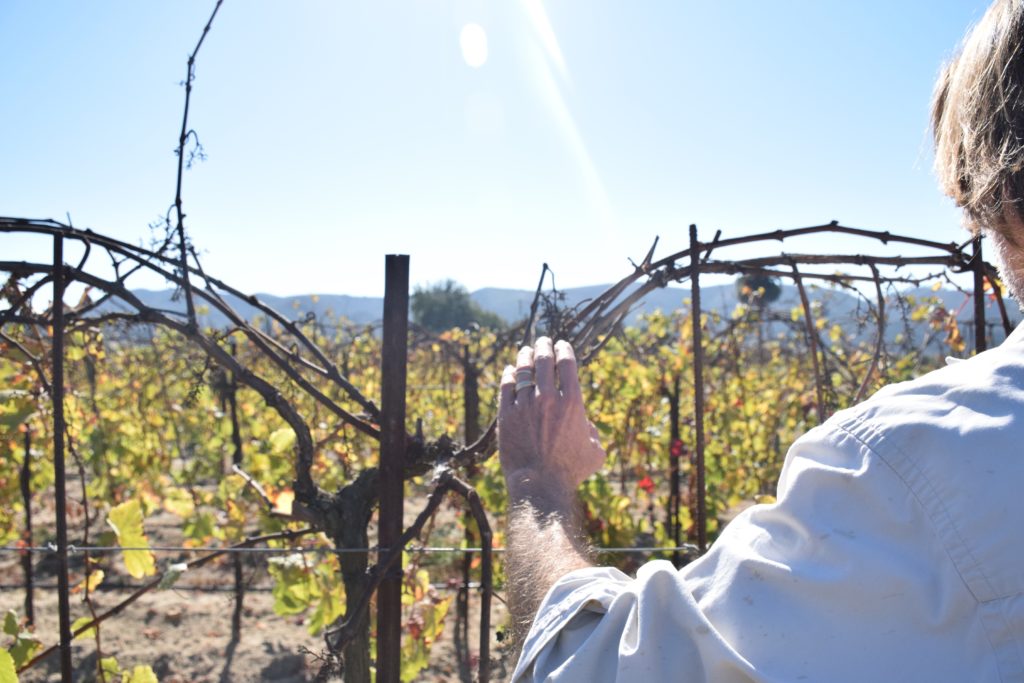 Bryan Babcock, the owner of Babcock Vineyard and Winery in Santa Barbara County, explains his unique trellising system he’s created for his vineyard so that he can better harvest his crop mechanically. Babcock is one of hundreds of California grape growers who are adapting their practices amid a farmworker shortage. December 2019. (Photo by Kaitlin Washburn/GroundTruth)

EXETER, CA – Across the nation, there is a tendency to reduce California to its economic heavyweights, Los Angeles and the San Francisco Bay Area.

But in a state that extends more than 163,696 square miles, with a population pushing 40 million, there’s far more to life here than Hollywood or Silicon Valley. Each of California’s major regions — Southern California, the Inland Empire, the Central Valley, Bay Area, Northern California — carry their own identities, and their nuances are easily overlooked.

As a reporter for The Sun-Gazette in Exeter, California, covering the San Joaquin Valley and the agricultural industry in the state’s heartland, I’ve seen another side to this sprawling land. I’ve hiked the rolling hills and talked to people who work the fields and tend the animals. This area and these people are the backbone of California. Yet, they are persistently underestimated and misunderstood.

California is the nation’s largest agricultural producer, growing more than 400 commodities at a value of $50 billion. More than one-third of the nation’s vegetables and two-thirds of the nation’s fruits and nuts are grown in California. Dairy, grapes, almonds, cattle, pistachios, strawberries, lettuce, tomatoes and oranges from California are worth billions of dollars each.

California’s Central Valley — nestled among four mountain ranges — once featured rivers, lakes and expansive wetlands. Those waters eventually either dried up or were rerouted, leaving behind rich soil. In addition, a moderate climate and intricate irrigation systems make the valley one of the most fertile regions in the world.

Grapes, oranges and dairy from Tulare County are shipped across the U.S. and exported to the world. In 2018, the county’s agricultural value was $7.2 billion, making it one of the top three for farm production in the state.

As the COVID-19 pandemic spreads, the necessity of sustaining the agriculture industry is even more obvious. Agriculture is designated an essential workforce under California’s shelter-in-place mandate; farm workers remain in the fields so that produce can still be harvested, packaged and sent to grocery stores.

Before the pandemic, public health concerns created tensions among the agricultural industry, regulators, the public and the news media. Pesticide drift, for example, threatened the safety of farm laborers, and medical professionals continue to grapple with valley fever, a serious fungal infection that endangers farm workers.

And while Tulare County produces food for dinner plates worldwide, the county has the highest food stamp participation rate in California.

Agriculture’s contributions to climate change also have been scrutinized, and some within the industry are trying to do their part to reduce those effects. A new, one-of-a-kind renewable gas facility, for example, is converting the methane emitted from cow manure into renewable energy, reducing greenhouse gas emissions.

Farm worker advocates such as Lali Moheno have spent their lives fighting for people working in the fields. Moheno grew up on ranches in south Texas and fought for labor rights in Los Angeles beside legendary advocate César Chávez. For the past 20 years, she has led a valley-wide conference focused on female farm worker wellness and empowerment. Moheno is just one example of the grit embodied in this place.

A crippling labor shortage has affected nearly every corner of California agriculture. Increased competition for workers continues as wine grape growers lose labor to commercial cannabis growers — who can offer higher wages, stable employment and better working conditions because of how lucrative the crop is.

As California’s news media dwindles, the agriculture industry, despite its vital importance, receives less coverage. Growers also are often hesitant to talk about the challenges they face because they don’t trust journalists to understand their reality.

They extend that criticism to lawmakers as well.

But farmers, journalists and elected leaders have a responsibility to work together and encourage transparency in the interest of all Californians, especially now. Our survival depends on it.

Kaitlin Washburn covers agriculture for The Sun-Gazette in Exeter, California. This dispatch is part of a series called “On the Ground” with Report for America, an initiative of The GroundTruth Project. Follow her on Twitter: @kwashy12.

A version of this story appeared on USA TODAY on April 6, 2020