In a global COVID-19 crisis, flashes of authoritarian instinct 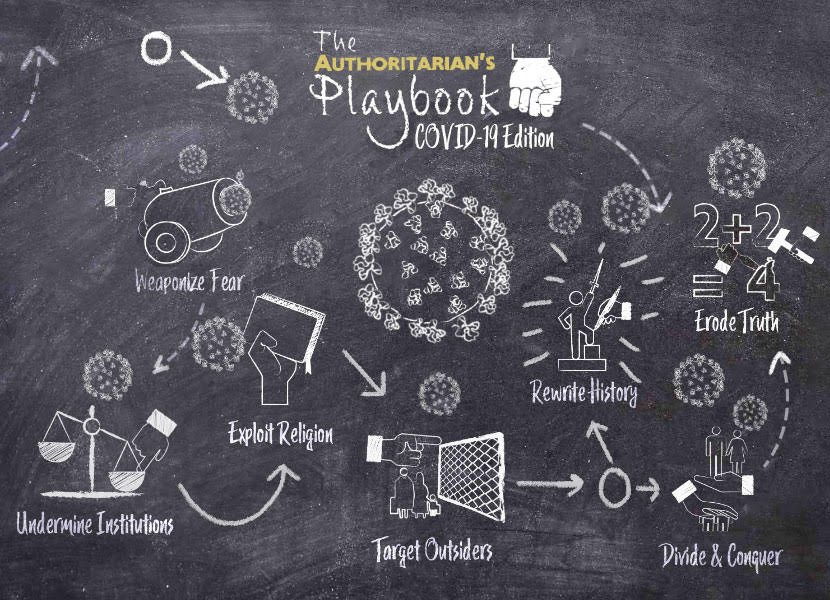 WASHINGTON — Fear and chaos are the soil in which authoritarianism grows best, and we have entered a fertile planting season for tyranny as the reality of the global pandemic takes hold.

Around the world from China to Washington and from Brazil to India, it seems as if leaders are going straight to “The Authoritarian’s Playbook,” as we called it in our year-long reporting project titled Democracy Undone. From the erosion of truth and undermining of institutions in handling the early outbreak to efforts to target outsiders in assigning blame to “divide and conquer” techniques to seize power at a time of instabilities, autocratic leaders and those who aspire to be are showing their true colors.

We now know that while medical professionals, citizens and journalists in Wuhan, China urgently sounded the alarm about a new coronavirus with similarities to SARS in late December and early January, Chinese officials worked to stop them and suppress the truth. They withheld information about new cases well into January as international travel in and out of Wuhan continued and the virus began to spread worldwide.

A new study from University of Southampton estimated that action even a week sooner would have reduced cases by 66 percent. In the United States, the Centers for Disease Control and Prevention announced the first case on January 21, but the Trump administration dismissed the significance of COVID-19, also seeking to control the narrative and continue with business as usual.

Trump himself continued to socialize with officials including Brazilian President Jair Bolsonaro, who himself called efforts to prevent the disease “hysteria,” well into March. Public health officials say the White House squandered critical response time gifted to the U.S. as China, Iran, South Korea and Italy were overcome with infection and loss of life. We are still learning about the Trump administration’s catastrophic failure to act, and the ultimate human toll it will take.

This week Trump abruptly pivoted to the language of action as the crisis became too big to deny, claiming that he’d been well aware of COVID-19’s severity all along. In the now-familiar language of his tweets, Trump pinned responsibility for what he called the “Chinese Virus” on the Chinese government itself, taking credit for his “very early decision to close the borders” from China – against the wishes of almost all.” He then returned to attacking the press.

Related: How Trump sells his war on truth

In a crisis, the potential for abuse of power is far greater and the implementation of the playbook more acute. The COVID-19 response from President Trump — who has failed the “litmus test for autocrats” put forward by scholars Steven Levitsky and Daniel Ziblatt — has included the following:

Weaponize Fear – Rather than seek to calm the country, the president’s rhetoric was by turns dismissive, overconfident and accusatory, lambasting Democrats, the press and China. A primetime address from the Oval Office included misinformation about a European travel ban that EU leaders hadn’t been briefed about. Rather than guarantee that U.S. states would have the medical supplies they’ll need to cope with the disease, he suggested governors should consider “getting them on their own.”

Target Outsiders — While racism against Asians has spiked from the earliest days of the now-pandemic, the use of terms like “Chinese virus” and “Kung flu” by White House officials, including the president, further encourages it. CNN reported that the Trump administration is pushing to block all asylum seekers from entering the country because of coronavirus.

“Trump is an authoritarian,” wrote Jared Yates Sexton, author and associate professor at Georgia Southern University. “Authoritarians are inherently incompetent and their incompetence creates crises. Those crises are blamed on conspiracies and minorities. When anger builds, authoritarians seize power.”

Undermine Institutions — Trump fired the U.S. pandemic response team in 2018 to reduce costs. Early warnings from the Centers for Disease Control and Prevention went unheeded. Lessons learned by the Obama administration during Ebola and other outbreaks were not taken seriously at the highest levels of the administration. An offer from the World Health Organization to provide COVID-19 tests in January was rejected. As of Tuesday, the Army Corps of Engineers had still not been assigned a mission.

Rewrite History — With an obsessive focus on the idea the press is out to get him, Trump is targeting the messenger when, according to a consensus of health experts, his own messages and actions around coronavirus have been deeply flawed. “For those of us in this field, this is profoundly and deeply distressing,” said Matthew Seeger, a risk communication expert at Wayne State University who helped develop the CDC guidebook on how U.S. leaders should talk to the public at times like these.

Exploit Religion — As COVID-19 spread across the country, Trump declared Sunday, March 15, a National Day of Prayer. Playing to his white Evangelical base, the president (whose administration has waged a war on science from its earliest days) spoke past the 35% of Americans who do not identify as Christians, as well as those Christians who would emphatically prefer a more robust government response to a Day of Prayer. White Evangelicals approve of Trump’s handling of the pandemic at a much higher rate than the average American, according to a new HuffPost/YouGov poll.

Divide and Conquer — Continued attacks on Democrats, China, journalists and anyone who doesn’t offer full-throated support. As journalist and expert on Russian authoritarianism Masha Gessen wrote in The New Yorker, “Anxiety is ever the autocrat’s friend. Living in a fog where one either doesn’t know whom to believe or finds fact-based reality terrifying, more and more people may heed the clarion call of the con man-in-chief.”

Erode Truth — Mixed messages on what the public should do, and an ever-changing story from the White House on its response, sow confusion. Rage at journalists who dare to hold the administration accountable for its actions, as when Trump attacked PBS NewsHour reporter Yamiche Alcindor’s “nasty question” about his dissolution of the pandemic response team in 2018. And with a variety of health-focused agencies and rapid-response teams short-staffed or eliminated due to budget cuts, truth is in short supply at the top. A Trump-enforced “loyalty oath” threatens those who remain in his administration.

Related: Seven steps by populists worldwide to undermine the democracies that elected them

The same playbook can be applied to various leaders around the world. And as we head deeper into this global crisis, the possibilities for aspiring autocrats to exploit it multiply. Embattled Israeli Prime Minister moved against the country’s judiciary, shutting down courts and postponing his corruption trial by two months while more widely deploying anti-terror surveillance technology in the name of combatting the virus. Members of India’s ruling Hindu nationalist Bharatiya Janata Party have painted those protesting a controversial citizenship bill that targets Muslims as a threat to public health.

Strongman Filipino President Rodrigo Duterte has already declared a six-month “state of calamity” lockdown in Manila and beyond. Right-wing leaders in Europe quickly (and falsely) linked coronavirus transmission with migrants fleeing Syria and other preexisting catastrophes. And in the U.S., a debate has emerged around fears that President Trump might attempt to exploit COVID-19 to push back the presidential election in November, which remains highly unlikely because only Congress can do so. Yet because stopping coronavirus means limiting people, large-scale action is both essential and ripe for abuse.