ON THE GROUND IN RAPPAHANNOCK, VA

‘I’m struggling.’ Straight-A student opens up about high school life during a pandemic 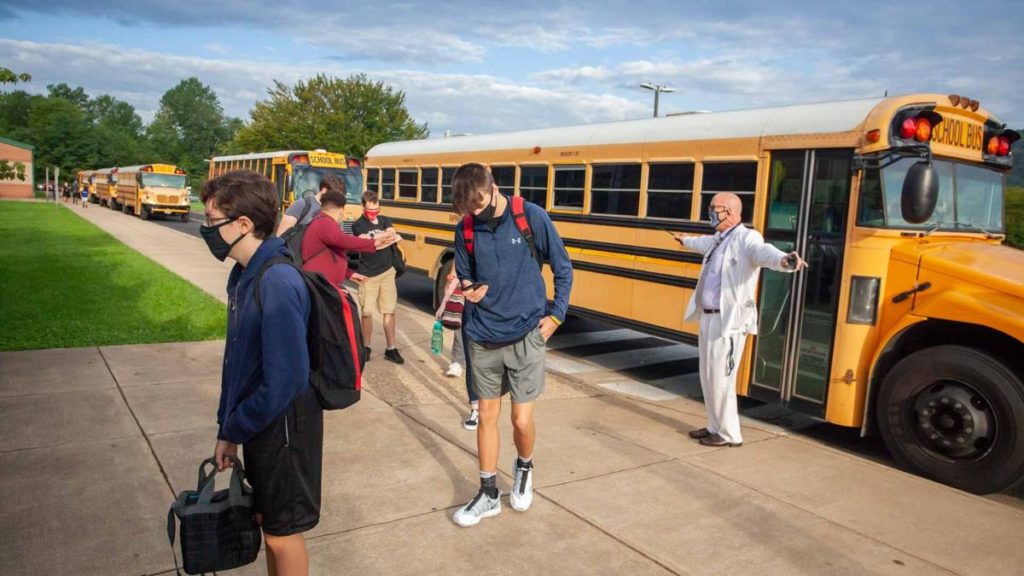 “I’ve waited my whole life for this year that everyone has said would be the best year of high school,” Scheulen said, “and it’s definitely not.”

“This year we definitely don’t get to do anything normal, like no dances, which I guess I should have expected, but I thought they would find a loophole somehow to let us do stuff like that.”

Scheulen and her siblings, Isaac, 14, and Emily, 10, attend school two days a week.

Rappahannock county, located in the Piedmont region of Virginia, east of the Shenandoah National Park, is home to about 7,500 residents. There are no stoplights, no grocery stores, no laundromats and hardly any cell phone service.

Since August, Rappahannock County Public Schools have been operating under a “hybrid model.” Half of the roughly 360 students attend school on Mondays and Tuesdays and the other half attend on Thursdays and Fridays. Some students whose parents both work outside the home qualified for in-person instruction four days a week, but RCPS reserves Wednesdays for teacher planning and deep cleaning, so all students are assigned remote work.

On the days she goes to school, Scheulen and her close friends share some of the same classes. “I got lucky,” she said. But she doesn’t see them very often, she added, because at lunch the students stay in their classrooms and in their classrooms they stay at their desks.

“You’re across the room and you can’t really get up and talk to each other so that’s definitely weird,” Scheulen explained. “And you can’t stop and see [friends] in the hallway like we used to.”

The students spend most of their days in school either in masks or behind plexiglass desk shields, always six feet apart. The safety protocols, devised in collaboration with the Virginia Department of Health, have already helped the schools successfully contain two unrelated cases of COVID-19.

Nevertheless, learning in such an environment has been anything but easy.

“The desks are already small, so then when you have a barrier you can’t hang anything off the desk which is very hard.,” Scheulen said.

When asked what it was like to wear a mask all day, Scheulen said that at first it was no big deal. “But when you’re wearing it all day it’s annoying,” she said. “Today I wore my glasses for the first time and with the mask they were fogging up every five seconds and it was very frustrating.”

And though they’re in class two days a week, Scheulen feels like it’s not enough. “I’m basically teaching myself,” she said. “It seems like there’s no time [for the teachers] to teach you anything in two days. So you go home and you sit there and you read and you try to teach yourself and you do all the assignments and I’m basically just doing them to get them done.”

In September, US Assistant Secretary of Education Frank Brogan visited RCPS to observe how the schools have managed to reopen. And he commended the hardworking administration for the success of its strategy, praising Rappahannock as a “reopening success story.”

“It is so impressive what you have done here,” Brogan said.

And it was impressive. The Rappahannock County Board of Supervisors allocated close to half of its federal coronavirus relief dollars to the RCPS reopening effort. Superintendent Shannon Grimsley acted quickly to secure the equipment needed for reopening, from desk barriers to touchless hand sanitizer stations to HVAC upgrades. A reopening task force thought through best practices to prepare for possible scenarios. And to top it all off, the schools made sure every student who needed one was given a device for doing schoolwork at home.

But just seven weeks later, RCHS Principal Jimmy Swindler held a staff meeting and told teachers that just under 45% of students were failing. In an email addressed to faculty, Swindler attributed the number of failing grades to an unprecedented volume of assignments that students either hadn’t finished or hadn’t completed.

“A failure rate of such high percentage is, rightfully, cause for alarm,” Swindler said.

Despite Dr. Grimsley’s unwavering dedication to the schools, despite teachers’ tireless commitment to their students, and despite the community’s good faith efforts to provide some sense of normalcy in a time of upheaval, students were — and are — still struggling.

“As trauma-informed educators,” Grimsley said, “we can presume that this time is traumatic for students and their families. Seeing a zero on a report card is reflective of challenges with the remote learning model, not necessarily of teachers or their students.”

Like many rural parts of the country, Rappahannock is contending with a “digital divide.” An RCPS survey of Rappahannock families found that a mere 34% of students have access to reliable broadband at home — meaning some Rappahannock students do their homework in parking lots where the school has set up WiFi hotspots and others don’t do it at all.

Not wanting to degrade Rappahannock’s bucolic views, the county government has resisted the installation of wireless communication towers on ridges and crests. But the preservation of the county’s views has come at the cost of leaving those in valleys and hollows in a deadzone.

Rappahannock teachers are saddled not only with the tremendous task of educating children from a distance amidst a serious global pandemic, but also with the burden of doing so at the mercy of fickle rural broadband.

And children, trying to keep up, are doing the best they can.

The Scheulens are fortunate that they do have high-speed internet at their house. Before the pandemic, Olivia’s mother Jennifer worked remotely five days a week. Now that her kids are at home for three of those, she often parents during the day and gets her own work done late at night.

“We have a very small house and our youngest doesn’t even have her own bedroom so there’s nowhere to go to really work where [she’s] not sitting in the middle of the house,” Jennifer said. “During the day when we’re all trying to get work done, it’s very hard to keep her focused … I have work to do, too, but every few minutes she gets distracted so I have to say, Emily, are you doing your work?”

“Usually when I’m doing my work, I do it in the living room,” Emily added. “and there’s a bunch of like, little things in the living room … like notepads everywhere, and usually I get on those and I just get carried away,” the ten-year-old said.

Even with broadband access at home, remote students still face distraction, low-motivation, and frustration with the online learning platform.

Isaac Scheulen, a ninth grader this year, said that sometimes he’ll be ready to do work in the morning but teachers won’t get around to posting his assignments until the afternoon. That can be enough, Isaac said, to determine whether or not he finishes an assignment on time.

Plus, if Isaac has a question about the homework during the day, he has to email his teachers and wait for an answer.

“It will normally take an hour for a response back just because they’re teaching classes,” Isaac said. “So that can halt your progress on a certain topic if you can’t get past this one thing.”

Like his older sister, Isaac said most of the time he feels like he’s teaching himself. And because of that, it takes him longer and the workload feels heavier than normal.

Still, Isaac said his grades haven’t been affected very much. He enjoys managing his own time and getting to work how and when he wants. With his new schedule, Isaac spends a lot of his daytime hours outside. Olivia, on the other hand, is having a harder time.

“I’ve always gotten straight-As all throughout elementary school, all throughout high school, and this year I have Bs and Cs. That’s something I’m definitely not used to,” she said.

“I’d say I’m struggling,” Olivia continued. “Some days are really good, like some days I tell myself, okay, if I just sit down and do it I’ve got this. It’s no problem. I don’t need to stress about it. And then some days it’s bad and I’m not doing well.”

A year ago, Olivia was planning on going straight to a four-year college right after high school. Now, though, she’s not so sure.

“I definitely think after this year that I don’t like school as much as I thought I did. I want to go to college, but at the same time a lot of the stuff we’ve been doing in school is pointless to me at this point,” she said.

Her shift in attitude toward college makes her mom worry about her daughter. “She’s been a straight-A student forever and this year with the way things are and the way she’s having to do things, her grades have slipped,” Jennifer said. “She’s been trying really hard and still her grades are slipping.”

In January, RCPS plans to bring kindergarten and first grade back to school four days a week, and the schools plan to gradually welcome back the older grades.

Like many families in Rappahannock County and throughout the country, the Scheulens are looking forward to returning to some kind of normal. “Even though nobody’s happy with the way things are right now, I think if they do go back to school four days a week, we’ll send them,” Jennifer said. “I think it’s time, you know?”

Rachel Needham is a general assignment reporter for the Rappahannock News. This dispatch is part of a series called “On the Ground” with Report for America, an initiative of The GroundTruth Project. Follow her on Twitter: @rachelwneedham.