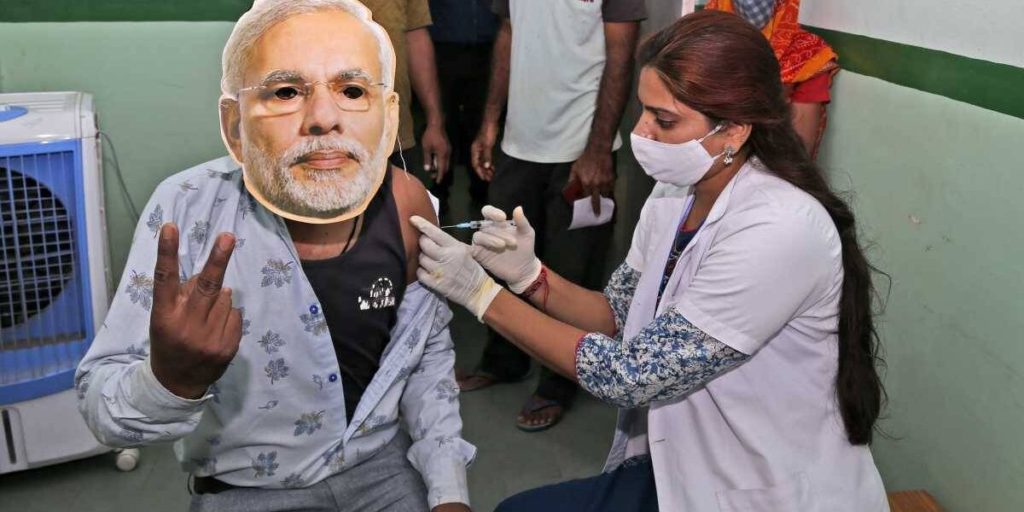 A health worker gives a COVID-19 vaccine dose to a beneficiary wearing a face mask of Prime Minister Narendra Modi during a vaccination drive in Beawar, Friday, Sept. 17, 2021. (Photo by: PTI/File)

New Delhi: On June 23, the Lancet Infectious Diseases published a study which said that about 20 million COVID-19 deaths were averted worldwide due to the vaccination programme. The same study estimated that in India, 4.2 million such deaths were prevented in 2021. This figure made headlines in several publications across the country.

However, the researchers from Imperial College London, who wrote this paper, arrived at this number on the basis of excess death numbers for India and other countries – the same excess mortality data that the Union government rejected, no matter which agency it arrived from, be it the World Health Organisation, the Institute of Health Metrics and Evaluation (published in The Lancet) or any other independent group of researchers

In fact, at the World Health Assembly held in the last week of May, India’s health minister Mansukh Mandaviya made no secret of his government’s displeasure with the WHO’s estimates, which said India witnessed 4.7 million deaths due to COVID-19 in 2020 and 2021 – a number almost 10 times higher than India’s official count.

Excess mortality is the difference between registered deaths due to all causes in a pandemic year and the number of deaths that one expects to occur in that year if there hadn’t been a pandemic, estimated based on previous years’ data.

Interestingly, India has not rejected the figures on the number of deaths prevented even after about 14 days of publication of the June 23 paper. While the government issued almost immediate rebuttals to any excess death estimates that exceeded its own, no government functionary has said anything about the present paper.

So, can the government accept the present findings and reject the others, even though the sources for both would be linked? The Wire asked two experts the same question. Both Aashish Gupta, a demographer and currently a David E. Bell Fellow at the Harvard Center for Population and Development Studies; and T. Sundararaman, former head of the Union Ministry of Health and Family Welfare’s National Health Systems Resource Centre, said no.

Either the government has to reject the fact that 4.2 million deaths were averted due to its COVID-19 vaccination programme in the country from December 2020-21, or it has to accept the excess mortality figures, they said.

For context, the researchers estimated the number of deaths prevented due to COVID-19 vaccination both on the basis of deaths officially reported by countries and the excess mortality estimates that various agencies came up with. For the latter, the researchers used the data from The Economist.

Difference in number of deaths averted

Similarly, for India, if only officially reported deaths were to be taken as the baseline, then the number of deaths prevented due to the country’s vaccination programme – which the Narendra Modi government emphatically mentions on all international platforms – would be 3.4 million; 700,000 fewer than the 4.2 million figure that made the headlines.

This difference, between the number of deaths prevented by vaccines when calculating with the two different denominators, exists for virtually every country considered, as presented in the supplementary material of the paper. However, an analysis by The Wire reveals that this difference is the highest in the case of India.

The Wire’s analysis was in line with what the authors generally observed in the paper. “The discrepancy between vaccine impact estimates based on excess mortality and COVID-19 (registered) deaths was concentrated in settings with lower death registration and certification,” the paper said.

As of now, the Indian government has not said which denominator it prefers for understanding the impact of its vaccination programme. Nor does the paper give a clear judgement as to which figure – the officially reported deaths or the excess mortality estimates – should be considered the ‘correct’ denominator.

However, the authors of this paper do say, “The strong temporal correlation observed globally between reported COVID-19 mortality and excess mortality provides evidence that excess mortality is an informative indicator of pandemic-related mortality.”

In fact, on June 29, WHO director-general Tedros Adhanom Ghebreyesus, referring to the advantage of the vaccination programme in a press conference, said 20 million people’s lives were saved – the number that relied on excess mortality estimates.

Sundararaman said if the Indian government has to assess the achievements of its vaccination programme, the excess mortality estimates have to be accepted. “It is important to know what we achieved due to the country’s vaccination drive. Such an assessment would figure into future pandemic preparedness for every country; and therefore, for India also,” he said.

But Gupta and Sundararaman both suggested that the Indian government move on from the controversy and accept the single biggest lesson; to improve the death registration system of the country by making it effective and timely.

This sentiment is also echoed in the authors’ observations in the paper: “This substantial discrepancy (in the estimates of number of deaths prevented due to two different denominators) underpins the crucial need for continued investment in civil registration and vital statistics to prevent biases in mortality reporting (thus) further minimising the perceived impact and necessity of vaccination in settings with lower reporting of deaths.”

Sundararaman said if the government takes credit for the fact that a major tragedy during the third wave was avoided due to its vaccination programme, then it has to say what the baseline was.

“This Lancet paper hints precisely at that,” he added, and opined that accepting this paper’s findings will only put the spotlight on the success of the world’s biggest adult vaccination drive ever undertaken, though also highlighting the grim reality of excess deaths.