“I only want Brazil to understand that the trans population is being exterminated,” a transgender activist’s plea from exile 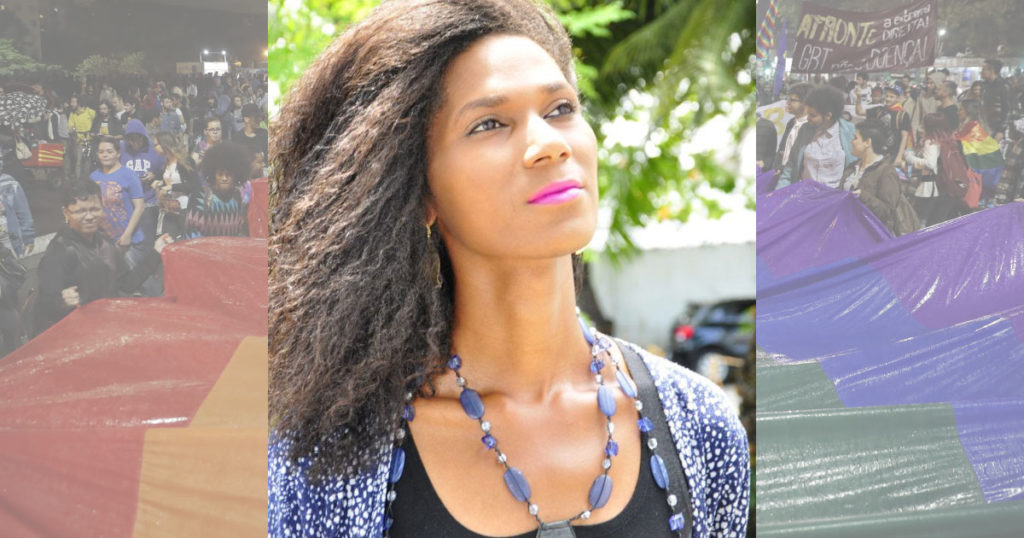 Fernanda Falcão had to leave Brazil and seek refuge in Spain because of the multiple threats to her life as a result of her work as an activist for LGBTQ rights. (Photo by Fernanda Falcão. Protest photo by Associated Press)

Editor’s note: Brazil is the most dangerous place to be transgender.

The country has led the global ranking of LGBTQIA+ murders for the past 13 years, according to the Trans Murder Monitoring research by Transgender Europe. Of the 375 cases reported globally in the 2021 report, 125 (33 percent) took place in Brazil. The second country on the list was Mexico, with 65 cases, and the third was the United States, with 53. A total of 4,042 murders have been recorded worldwide since the organization started keeping track. Of those, 1,645 have taken place in Brazil — 40 percent of all cases – or 4 out of every 10 victims.

In this interview, a Brazilian transgender activist explains how she decided to request asylum in Spain and recounts the pain of leaving her homeland to save her life.

Read the original story in Portuguese in Marco Zero

Leaving one’s own country to stay alive. This is what nurse technician and human rights activist Fernanda Falcão did after escaping an attempted kidnapping and having had her house riddled with bullets. After the attacks, Fernanda had asked for protection from the government of the state of Pernambuco, where she lived, and the local police, but they didn’t offer the security she needed to continue her humanitarian work. So she asked the Spanish consulate for help and started a campaign to collect donations in order to leave Brazil.

A trans and black woman, Fernanda worked in several organizations advocating for LGBTQIA+ rights, including the official city and state LGBT organizations dedicated to the design of public policies for this population. She also managed groups dedicated to assisting people living with HIV, such as the National National Network of Transvestites, Transsexuals, and Trans Men Living with HIV and AIDS.

As a Brazilian transgender, Fernanda had already experienced prostitution, prison, torture, sexual abuse, and even an attempted murder that left her between life and death after a gunshot wound​​. But it was her role as a human rights activist that made her consider exile.

According to the National Association of Transvestites and Transsexuals of Brazil (Antra) annual report, Pernambuco state ranked fifth in the 2021 ranking of transgender people murdered in the country, with 11 cases, two positions higher than in the previous year, when seven cases were recorded in the state.

Protected and assisted in Spain, Fernanda spoke with Marco Zero about transphobia and the painful process of leaving her homeland.

What made you decide to leave the country?

Fernanda Falcão – My body was already fragile. I was raped and tortured several times over the years and these violations were always linked to my life as a transvestite living in slums. The last time it happened, we (human rights activists) had taken 22 girls out of a house of prostitution in Abreu e Lima (a city in the metropolitan area of Recife, the capital of Pernambuco state). After that, everything became harder. I could no longer go out on the streets alone. People tried to kidnap me, they machine-gunned the front of my house, they kept surveilling the spaces I would go. So I really had no other way out, I had to leave.

Do you know other trans people who had to leave the country out of fear of murder?

Considering the current political moment we have in Brazil, many trans people had to leave the country. The risk of death is always present, and so is hatred, exclusion, and the difficulty of accessing social spaces. Today we experience a different kind of war. Because in a war, at least, one has the right to fight, and today we are being exterminated without any right to fight or defend ourselves. I know several people who left Brazil, one of them is Maria Clara Sena. She was the one who gave me the foundation and structure for me to leave too, in search of a better life, to live in a space where they don’t want to constantly kill you for being who you are. I believe that many people have left for these reasons.

You mentioned the political moment we have today in Brazil. Do you think the increase in violence and hostility towards trans people in the country is linked to the 2018 election of Jair Bolsonaro (an extreme-right politician who once said he’d be “incapable of loving a homosexual son” and he would prefer to “have a son killed in a car accident” than to be gay)?

The president is a person who encourages hatred, spreads hate, and normalizes everyone who says that killing and exterminating is the solution. The trans population has always been killed, it started way back, with the Inquisition itself. The slavery of our bodies has only changed its name, but it continues in the same way, destroying more and more our rights and our permission to live. How long will we, Brazilian citizens, allow this cruelty, this extermination?

As a human rights activist, how do you feel for leaving the country for the same issue you fight to end?

It’s very sad to give up what we love. Years ago, after being raped and tortured,  I considered myself a dead person, and I decided to dedicate my life to improving others’ lives. Today I feel powerless to continue everything I’ve started. This silencing hurts us in the flesh. It’s even weird for me to tell my story to the people who are here (in Spain), because it is not the experience they have. And that’s not what I want people to live there (in Brazil).

Are you still in need of donations to support yourself in Spain?

​I feel incapable of asking for help today when I already have food, a house and I am no longer afraid to go out to the streets. The only help I want is for Brazil to understand that the trans population is being exterminated, that others’ social privileges can be a door to help other people live. The privilege of hetero-cis-normativity should be a partner at this moment and say no to the trans population’s death and social exclusion.

Do you intend to come back to Brazil?

I never wanted to leave the country. My family, my friends, everything I’ve worked for years, all my dreams, everything that was built with great effort, and my own life ideology, are all still there. If I could, I would go back to Brazil right now, if the police were even remotely interested in finishing the investigation of the attacks against me. I spent six months in Brazil and they didn’t even start the investigation (on the last attacks she suffered). This only reinforces that my body and my identity have no importance for the State.

Giovanna Carneiro is a Report for the World corps members with Marco Zero in Recife, Brazil. She covers the environmental and social impact of development