ON THE GROUND IN RAPID CITY, SD

‘I felt like I was being ridiculed’: How Native Americans felt about the Washington football team’s name 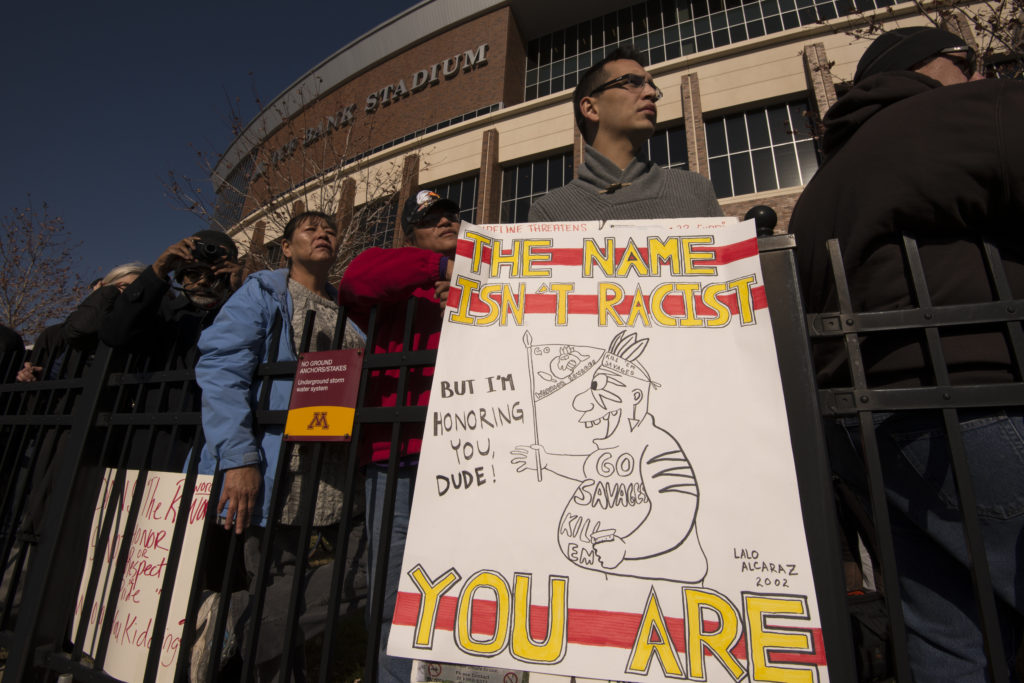 A protester holding a sign in Minneapolis as Minnesota Vikings played the Washington D.C. football team in 2014. Protesters marched through Minneapolis to TCF Stadium calling for the Washington team to stop using "redskins" for their name and stop using the image of a Native American as their mascot. (Photo by Fibonacci Blue)

RAPID CITY, S.D. — It was January 1988, not long after Robert Walter Two Bulls had moved from the Pine Ridge Indian Reservation in South Dakota to Washington D.C. The 23-year-old was working for a faith-based nonprofit that renovated inner city houses. He remembers his work being around the Shaw neighborhood, which included the U Street Corridor. It used to be a premiere, commercial, cultural and Black neighborhood but had been left in extreme disrepair after the race riots of 1968, which had left deep scars that were visible even after two decades.

As a new resident in the U.S. capital city, Two Bulls was very much looking forward to experiencing his first professional football game at the Robert F. Kennedy Memorial Stadium, especially as there weren’t any professional sports teams growing up in South Dakota.

“The [Minnesota] Vikings were in town, so I was super excited,” said Two Bulls, an enrolled member of the Oglala Sioux Tribe of the Pine Ridge Indian Reservation. “You don’t have those opportunities out there in South Dakota.”

As he was walking into the stadium, Two Bulls noticed a few people protesting outside. “I didn’t get it until I was in and started looking around at the fans that were there and how they were dressed: the painted faces…feathers…” said Two Bulls, referring to Washington Redskins fans. “I felt like I was being ridiculed. At that point I made a vow to never go to a D.C. game.”

It would take the Washington D.C. football team more than three decades from that day to right what Two Bulls and other Native Americans across the country felt was a wrong.

In July, the team said it is retiring the name, which the franchise adopted in 1933 when the team was still based in Boston. Under pressure from advertisers and sponsors, including FedEx, Nike, Pepsi and Bank of America, which came out against it, the team agreed to drop the name and announce a new one.

Importantly, the decision to change the team’s name came after nationwide protests against racial injustice, triggered by the police killing of George Floyd in Minneapolis. And just like his experience in Washington D.C., Two Bulls, now an Episcopal priest, lives half a mile from the epicenter of the protesting and rioting in Minneapolis.

“I think that it’s sad that it has taken this long and it’s taken something like that to push the owners to rename, drop the name,” said Two Bulls. “That should have happened a long time ago.”

Despite long standing criticism, Dan Snyder, the billionaire owner of the Washington team, had been adamant that he would never change the name. Snyder went so far as to say during an interview with ESPN’s Outside the Line that the name was meant to honor and respect Native Americans — a claim that South Dakota State Representative Shawn Bordeaux, an enrolled member of the Rosebud Sioux Tribe, strongly takes issue with.

“That’s not what we represent,” said Bordeaux. “ … To see our garb, our things that we wear with pride during ceremonies and such, and the fans make fun of all that stuff, it’s not something that they show us any kind of respect with. It’s totally making fun of our culture and who we are and the things that are important to us.”

Misrepresentation of the history of Indigenous populations in North America is something the country has struggled with for a long time, and contributes to widespread misunderstanding of the varied cultures, traditions, values and identities of Native Americans.

Studies have shown that most American students don’t get an accurate education in the history and culture of Native Americans, resulting in a detrimental ignorance of the origins of their own nationhood. Authors of a 2014 study that analyzed school textbooks wrote that the history “is painfully one sided in its telling of the American narrative, especially with regard to Indigenous Peoples’ experiences.”

Those history textbooks don’t teach American students about the millions of Indigenous people who were killed in North and South America through war, disease and slavery since the European arrival on the American shores. That struggle is still fresh in the minds of tribal members in South Dakota and the Midwest. Some are only three to four generations removed from the Battle of Little Bighorn of 1876, the tragic slaughter of elders, women and children known as the Wounded Knee Massacre of 1890, the establishment of reservations and the terror of boarding schools that forced Native youth to assimilate into the white culture.

“When I went to college, I rented my grandma’s little sister’s basement,” said Bordeaux, the state representative. “We had three generations in the same household. When I was a sophomore in high school, I sat down with my grandma and she told me stories and I wrote them down.’

“These stories are real,” Bordeaux said. “When your grandma tells about her grandma, it doesn’t seem like 1880s or nineties, it seems real present.”

That’s very different from the Hollywood portrayal of Native Americans as bloodthirsty savages whooping and hollering as they pillaged and fought the U.S. Army and white settlers. And from the depiction of cartoonish caricatures on the banner and in the stands of a football team.

“I was born in Georgetown University Hospital, and we moved back out to the reservation two weeks later,” said Bordeaux. As a kid, when I was in elementary school, kindergarten, first grade, I liked the Washington Redskins, because they had an Indian on their thing, and I thought somehow that represented us in the sense of, ‘Oh, we’re finally acknowledged.’

But when you start with so little understanding and empathy around your culture and identity, it’s difficult to know when you’re being mocked. The name change matters to Native American communities, Bordeaux said.

“We’re still in the middle of trying to figure out what happened to our people.”

Richard Two Bulls is an enrolled member of the Oglala Sioux Tribe on the Pine Ridge Indian Reservation. He covers ethnic communities for South Dakota Public Television including the state’s nine Native American Reservations. This dispatch is part of a series called “On the Ground” with Report for America, an initiative of The GroundTruth Project. Follow him on Twitter: @TwoBullsSPDB