A hundred years after WWI, haunting parallels between America’s Trump and Germany’s Wilhelm 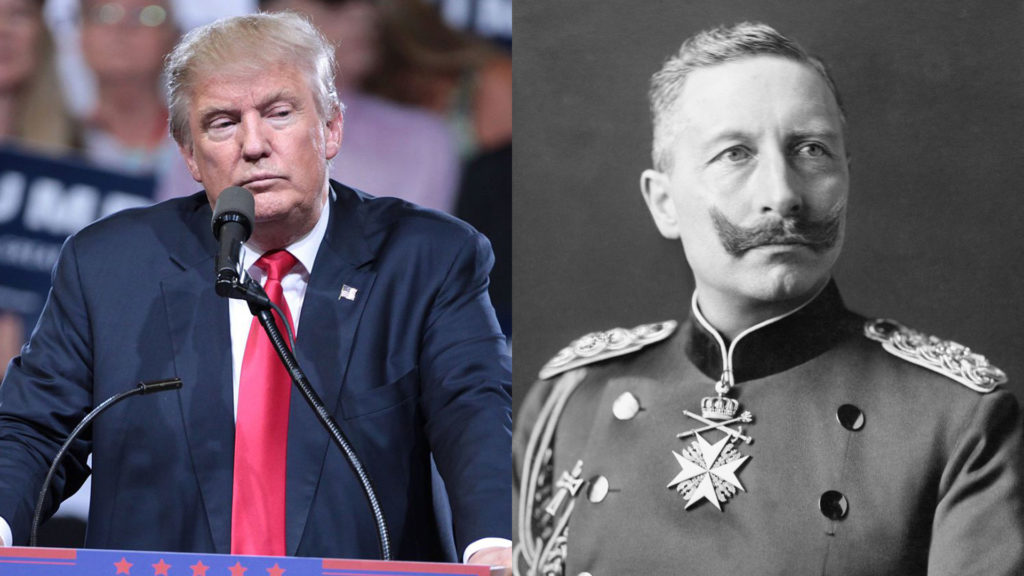 An inheritor of privilege, this leader of a superpower was impatient, reckless and vulgar. He was capable of insulting even his country’s closest global allies and viciously attacking his domestic opponents. And as he set out against the advice of his advisers to court a closer relationship with Russia, he left the world teetering with uncertainty over what felt like a collapsing world order.

No, that’s not President Donald Trump we’re referring to, on his diplomatically disastrous trip to Paris this weekend. It’s how historians describe Kaiser Wilhelm II, the German emperor from 1888 to 1918, who was widely seen as taking the fateful missteps that ignited World War I.

And yesterday the historical comparisons between Trump and Wilhelm echoed across Europe along with the church bells that tolled eleven times, a somber remembrance of the 100th anniversary of the armistice on the “eleventh hour of the eleventh day of the eleventh month” that brought World War One to an end.

On a weekend trip to France to honor Remembrance Day–or Veterans’ Day as it is referred to in America–Trump was expected to stand shoulder-to-shoulder with other world leaders. He was there to honor the shared sacrifices made in a war that claimed the lives of 20 million soldiers and civilians. He was supposed to reinforce the alliances forged of the horrors of that war and that were tempered further in World War II, and have shaped the global world order ever since.

But that’s not at all how it turned out in Paris this weekend.

First, Trump was greeted Saturday with condemnation for failing to attend a ceremony at the somber site of the American Cemetery, setting of the ferocious Battle of Belleau Wood. The White House cited “poor weather” for the reason the president remained in his hotel room. But other leaders were not put off by wind and rain as they visited cemeteries honoring the fallen of their respective countries, and it definitely did not go over well.

Speaking of the fallen marked by the graves at Belleau, Nicholas Soames, Churchill’s grandson and a member of British Parliament, tweeted:  “They died with their face to the foe and that pathetic inadequate Donald Trump couldn’t even defy the weather to pay his respects to The Fallen.”

At a somber ceremony beneath the Arc de Triomphe on Sunday, French President Emmanuel Macron repudiated Trump’s “America first” nationalism.   He called on Trump to reaffirm international alliances and global institutions that he’s has made a point of disparaging and in some places dismantling during his two years in office.

“Patriotism is the exact opposite of nationalism,” said Macron, giving his speech on a day of steady rain. “Nationalism is a betrayal of patriotism by saying, ‘our interest first, who cares about the others.’”

Macron issued historical comparisons between the years before World War I and the geopolitics of today and the worrisome rise of nationalism in many corners of Europe and by Trump who declared himself “a nationalist” last week, Macron warned that “the old demons” are resurfacing in Europe.

Macron cautioned against “giving into the fascination for withdrawal, isolationism, violence and domination” as a “grave error that future generations would very rightly make us responsible for.”

Cambridge University historian Christopher Clark, the author of Sleepwalkers: How Europe Went to War in 1914, sees direct parallels between today and the years leading into World War I, particularly a rising sense of distrust between once-reliable allies.

“It was a world in which the distrust seeped into the relationships between friends and that created as much risk, as much uncertainty, as the hostility between alliance blocks,” said Clark, adding that Trump’s disparaging views on the North Atlantic Treaty Organization are particularly disconcerting.

“NATO has played a key role in keeping the peace… It’s no longer clear how strongly and how lasting the American commitment to NATO is and what forms that commitment will take in the future. And there are also signs of growing distrust and un-coordination within the other group within the European NATO partner states, a the European Union. So there’s a sort of general decline in cohesion and predictability, which is I think worrying in which not only itself constitutes a risk but encourages those who make decisions, which might touch on war and peace, more inclined to take risks because it makes them more nervous.”

Amid these parallels with WWI and troubling concerns about the erosion of trust among allies, Clark said an even more troubling similarity between Trump and Kaiser Wilhelm was what he called their “non-standard” and “eccentric” personalities.

Clark added that many historians agree, “The Kaiser in many ways is very, very like Donald Trump” with “an almost pathological inability to express or possibly even to feel empathy with other human beings.”

“He could be extremely brash and boastful, but he was also very thin-skinned and prone to anxiety.. So he was sort of impressionable but also impulsive, a weird combination. Someone who could be- who was easily manipulated by momentary emotional states, but on the other hand, was prone to impulsive outbursts of rage and irritation and which he found very difficult to master. So, I mean, the comparisons just go on and on.”

One comparison Clark finds particularly intriguing is that Wilhelm was surrounded by aids and advisers who understood his recklessness and tried to prevent him from his worst impulses, and one of those dangerous intrigues was with Russia.

Kaiser Wilhelm, Clark explained, “had managed to sort of wangle himself into a special diplomatic mission to Russia… And he indeed did start this secret exchange of letters with the Russians providing them with very high-quality information about what was going on with Berlin. This eventually stopped, of course, but it’s interesting to see that both of these officeholders, as it were, have sort of been overshadowed to some extent by their relationship with Russia.”

So yesterday, the photographers traveling with President Trump had a field day with the moment when Russian President Vladimir Putin flashed a thumbs up to Trump at one of the commemorative events. And the moment was particularly fraught given the fury back in Washington over the fate of the Special Prosecutor’s investigation into alleged collusion between Trump, his campaign and Russia, and mounting evidence that Russia interfered with the presidential election in 2016 that brought Trump to power.

For his part, Trump was staying true to character in Paris. Just like Kaiser Wilhelm famously lambasted his domestic critics, Trump was blasting Democrats in Florida for their refusal to concede a close election for governor and a senate seat amid a recounting of ballots. Trump tweeted: “Trying to STEAL two big elections in Florida! We are watching closely!”

So what became of Kaiser Wilhelm? After the war, he was forced to abdicate the throne and lived in exile until he died in 1941.