How young poll workers may save Americans from Election Day chaos 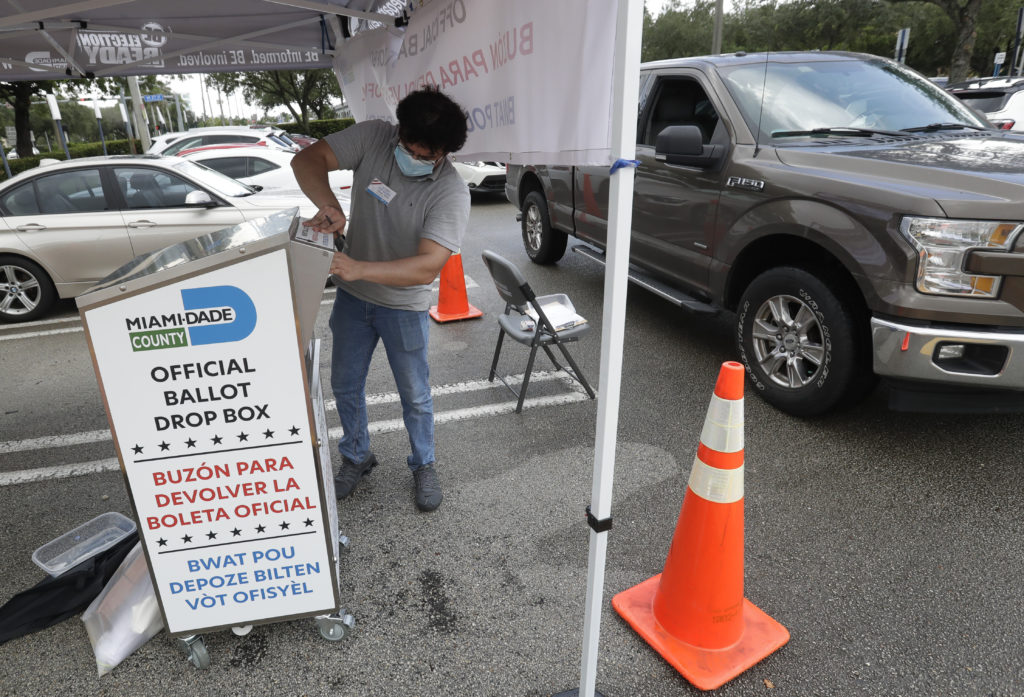 A poll worker wearing personal protective equipment deposits a Vote-by-Mail ballot for a voter, Monday, Aug. 3, 2020, at a poling station at the Miami-Dade County Elections Department in Miami. (Photo by Wilfredo Lee/AP Photo)

Evan Malbrough is one of the younger — and more valuable — poll workers in his Atlanta, Ga., precinct.

The 22-year-old recent Georgia State graduate had not worked the polls before early voting for the June primary, but he quickly learned his way around the tools and processes of in-person voting.

Young poll workers such as Malbrough are uncommon. In the 2018 midterms, 92% of poll workers were older than 25, according to a Pew analysis of data collected by the Election Assistance Commission.

But in this year’s general election, recruitment of younger poll workers may be the difference between the smooth execution of a fundamental right of democracy and Election Day chaos on a national scale.

Election officials and activists are recruiting young, healthy workers like Malbrough after thousands of older poll workers, at acute risk of contracting COVID-19, quit in the buildup to primary elections.

Poll workers are indispensable to the election process. They set up, monitor and tear down polling places, check in voters, monitor voting equipment, conduct recounts, and process provisional and mail in ballots.

If officials can’t recruit enough workers, polling places won’t open in some locations on Election Day. And with early voting set to begin in some states as soon as Friday, they’re running out of time to fill the gap.

Milwaukee, Wisc., opened only five of 180 polling places for its April primary. Voters waited in line for up to five hours. In Louisville, Ky., with a population of 600,000, only one polling place opened for the primary in June. After dozens of voters missed a cutoff time and were locked out, a judge issued an injunction to keep the poll open.

Election officials have had more time to prepare for November and mail voting will take pressure off in-person locations, but the need is still urgent: 43% of respondents in a recent NBC/WSJ poll said they plan to vote in person on Election Day.

Get the ground truth

In reporting about voting rights across the country this summer as a Poynter-Koch Media and Journalism Fellow, I have come to understand just how precarious this year’s electoral process is shaping up to be.

It takes a lot of people to run an election: more than 900,000 worked the polls in 2016. It’s difficult to aggregate exactly how many workers are needed nationally, but the shortage of workers appears dire in certain locations.

At least 24 counties in North Carolina were still struggling this month to find poll workers, according to the North Carolina Board of Elections. In tiny Teton County, Idaho., County Clerk Kim Keeley told Teton Valley News that two thirds of the normal 50 poll workers had informed her they wouldn’t return.

“We don’t have the army of people who are ready to fill in all of the gaps. We’re certainly not going to replace every poll worker who needs to be replaced,” said Rachael V. Cobb, a professor at Suffolk University who studies election administration. “We can understand how to design polling locations well to minimize lines. We can make suggestions to open stadiums (as polling places). We can have early voting. None of these are great solutions. They are stopgaps that we are crossing our fingers will work.”

If polls are short-staffed in November, it could lead to errors in counting ballot. Experts also say long lines at crowded polling places are tantamount to voter suppression for poor communities and communities of color, where voters have to work and can’t afford to wait for hours. Waiting in line for an extended time also may increase the risk for voters and poll workers of contracting COVID-19

Cobb says long lines are likely: “Bring your lawn chair and get ready.”

States have tried to adjust. Some have lowered the minimum age for working at the polls (many states already allowed workers as young as 16 to staff polling places on Election Day). Alabama and Vermont relaxed rules that required poll workers to serve only in their own home precinct, and Alabama increased pay for workers. Clark County, Nev., saw an increase in applications after it raised poll worker pay. And the Cuyahoga, Ohio, City Council voted to allow city employees paid time off to serve as poll workers, mirroring a similar effort in Alaska.

The biggest boost has come from recruitment activists. In July, Malbrough launched the Georgia Youth Poll Worker Project with a goal of recruiting 5,000 young poll workers for metro Atlanta precincts. As of Sept. 1, Malbrough’s social media campaign had recruited more than 750 workers, most of them college students or recent graduates.

“It’s a job and people are broke. They use it to pay for tuition, books, rent.” Malbrough said. “This is a jobs program in its purest form.”

The group operates without any funding, but its social media strategy has been highly effective. They blazed past their initial goal of 1,000 recruits in a week and have recruited more than 10,000 workers since then. Schwieger said many of them are high school students.

The largest poll worker recruitment effort is Power the Polls, a coalition that includes MTV, Patagonia, the Fair Election Center, Uber, Starbucks and United Way. It launched in June with a goal of recruiting 250,000 poll workers. More than 400,000 had signed by Sept. 10.

Power the Polls partners Old Navy and Starbucks, along with a growing list of other businesses, offer employees paid time off to serve as poll workers. The organization recently launched a $2 million social media ad campaign, with special attention on locations with severe shortages of election workers.

Initial registrations don’t always translate to staffed polling places, because signing up is only part of the process. Election officials still need to contact, place and train potential poll workers. It’s already surfaced as a problem in Maryland, where Gov. Larry Hogan scolded election officials for not adequately following up with potential workers.

“I am thrilled that there are so many people willing to help,” Cobb said. “There’s a difference between having people sign up and the larger process. The big word of the day is conversion. How do we convert the signups into actual poll workers?”

Malbrough, at least, will be on call. Now a poll worker trainer for his precinct, he leads three to five training sessions a week on Zoom. He’s also putting together a training program for students with the Andrew Goodman Foundation and planning training programs with Poll Hero. And on Election Day, he’ll be in the precinct call center, working as a troubleshooter.

In recent months, as I’ve interviewed voting activists and experts, it’s become clear that an additional surge of volunteers — and a well-coordinated effort to place them — is critical to successfully troubleshooting this historically challenging election.

This column is part of GroundTruth’s reporting effort on voting rights in America, with support from the Jesse and Betsy Fink Charitable Fund, Solutions Journalism Network and MacArthur Foundation.

A version of this story appeared on USA TODAY on September 16, 2020