How we got here: Report for America’s coverage of a divided nation 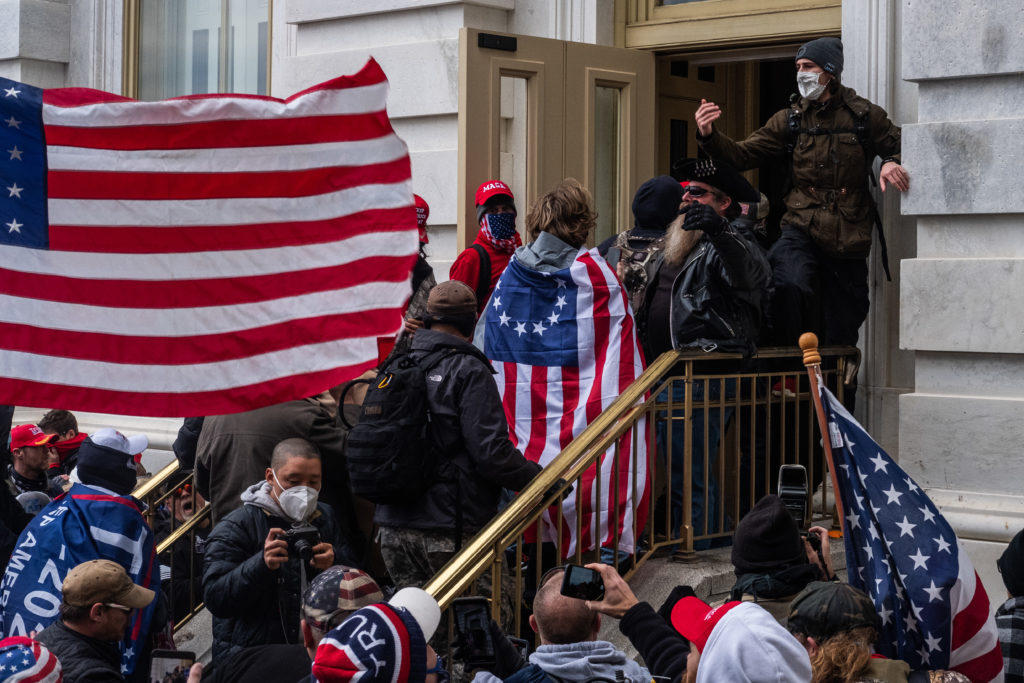 "Stop The Steal" Protesters in Washington, D.C. On January 6, 2020 supporters of President Donald Trump, Proud Boys, Oathkeepers and other rightwing activists broke into the U.S. State Capitol and stopped the certification of the Electoral College votes and forced members of Congress and their staff to evacuate the building. (Photo by Chris Jones/100 Days in Appalachia)

Infamy and anarchy. As the shocking images of yesterday’s violent occupation of the U.S. Capitol resounded worldwide, these two words repeatedly and trepidatiously fell from the lips of the American news media, lawmakers and the citizenry alike.

The former was used in reference to Franklin Roosevelt’s condemnation of the Japanese Empire’s bombing of Pearl Harbor on Dec. 7, 1941, but the latter seemed to refer to something far more opaque, something far more fundamental to the depths of the American psyche: freedom.

No one seemed quite able to place it. “Protest” morphed to “riot,” “supporters” to “insurrectionists,” “insurrectionists” to “terrorists,” “real” to “surreal,” and beacon on a hill to the invocation of the 25th Amendment.

As the riot unfolded and lawmakers were evacuated mid-ratification, as Trump supporters dared enter the Capitol with Confederate flags in hand, America was forced to reconsider–in real time–its long-held guarantees. But what happened yesterday is the echo of a bell tolled some time ago. Report for America corps members have been diligently tracking its resounding ring from locales across the country for months, and the culmination of their recent work signals a profound shift in the American landscape, a divided, angry and distrustful nation on the brink of sectarian violence.

As early as June, Lana Cohen reported out of Mendocino, California, on the collision of Black Lives Matter activists and Trump supporters on Main Street, a harbinger of seething racial tensions that would come to dominate the election.

Anthony Orozco reported in July on community tensions in Pennsylvania, a key battleground state, where protest rallies against police violence were scattered with unidentified armed citizens.

In August, Isabelle Taft of the Sun Herald captured a lightning strike of American racial division and fear when she reported on right-wing militia groups who stormed Picayune in response to false Facebook posts about a Black militia march. The only event planned was a vigil for Willie Jones, a Black man whose disappearance sparked racial tensions when a white man became a person of interest in the case and his father’s law office was set aflame.

That same month, corps member and Northern Public Radio reporter Juanpablo Ramirez-Franco covered a weekend of “Back the Blue” rallies in Rockford, Illinois, when 17 people were arrested following a confrontation with counter-protestors. Asked by a Facebook user if “now is it time to lock and load,” State Representative John Cabello replied, “not yet but be ready.”

Searchlight New Mexico corps member Dillon Bergen reported in October on the most extreme example of voter intimidation in the state to date: threats and hate-speech wielded against Democratic lawmakers, which coupled swastikas and epithets with proclamations of “Trump 2020.”

“It shows that our democracy has reached a crisis level,” said Heather Ferguson, executive director of Common Cause New Mexico, a nonprofit watchdog group that monitors voter intimidation.

And as the presidential election heated up, Kassidy Arena reported for Iowa Public Radio on intimidated Latino voters after President Trump appealed to his supporters in the first debate: “go into the polls and watch very carefully.”

Similarly, Chris Jones covered gathering militias in West Virginia and federal concerns of domestic extremism in the lead up to the election and Renee Hickman revealed troubling trends of misinformation and conspiracy theories driving local voters in Wisconsin as their representative, Republican Tom Tiffany, refused to condemn the baseless QAnon conspiracy theory in a House vote because it was a “time-wasting exercise.”

Throughout November, Report for America corps members doggedly covered the action on the ground and the windfall of one of the most polarizing elections in American history. Review that coverage here for a glimpse into communities nationwide.

Our corps continues to report everyday from the field, capturing the nuance and breadth of the American experience at a time of remarkable disunion. Their enduring work will compose the record of these momentous times, the latest of which continues to unfold before us from Washington, D.C. to Kentucky to California. In these stories lives the potential of this nation, imperfect but bound by the will of the people. Explore them here:

‘Ohio governor: Occupation of Capitol an ‘embarrassment’‘ by Farnoush Amiri with the Associated Press

‘From Washington to Annapolis, dismay, anger and disbelief follow insurrection on Capitol Hill‘ by Heather Mongilio with Capital Gazette

‘As a Black American, I feel frustrated by what happened at the Capitol. But I’m not surprised.‘ by Michael Butler with Technical.ly

‘Shameful’ and ‘disturbing’: Modesto-area leaders react to storming of DC Capitol‘ by Kristina Karisch with The Modesto Bee

‘Newsom condemns attack on U.S. Capitol and cancels press conference to protect his staff‘ by Kim Bojórquez for Sacramento Bee