How Trump is trying to cloud the presidential election result 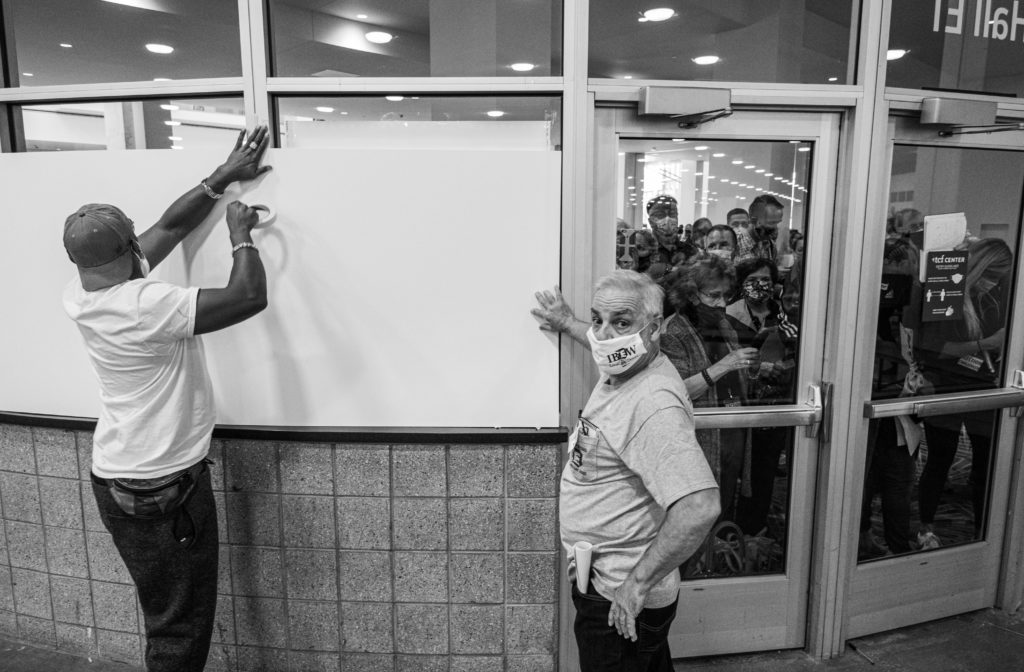 Poll workers board up the windows inside the TCF center where poll workers are counting ballots to block the view of poll challengers who are waiting to enter on November 4, 2020 in Detroit, Michigan. (Photo by Seth Herald/GroundTruth)

In shattering yet another democratic norm, Trump did exactly what he said he would, stoking the fires of confusion and riling up supporters to try to disrupt vote counting in the hope of overriding a result that looks increasingly likely to favor Joe Biden. The major news networks could not refrain from airing at least some of the speech, though did promptly fact check his erroneous and dangerous claims.

“Almost everything President Trump said in his declaration of victory was not true,” said CNN anchor Jake Tapper.

“This is an extremely flammable situation and the President just threw a match on it,” said Fox News anchor Chris Wallace. “He hasn’t won these states.”

“This isn’t law, this isn’t politics, this is theater,” said ABC News correspondent Terry Moran. “And let’s be blunt: it’s the theater of authoritarianism.”

“I talk tonight… as a former U.S. Attorney,” Christie said on ABC News. “There’s just no basis to make that argument tonight. There just isn’t. I disagree with what he did tonight.”

Bolton, who declined to testify in Trump’s impeachment hearing, was more forceful in saying they were “some of the most irresponsible comments that a President of the United States has ever made… It’s a disgrace.”

But the effort to affect the outcome through lies and misinformation continues to intensify.

The Trump campaign team has announced its intention to contest results in Wisconsin, which the AP and CNN have already called for Biden. It has asked the Pennsylvania Supreme Court to intervene as votes continue to be counted in that state, which has yet to be called and where Trump is leading.

His legal team has filed suit to stop counting in Michigan, and his supporters have begun to gravitate to the TCF Center in downtown Detroit, seeking to disrupt hundreds of poll workers in white collared shirts with heads down counting votes.

Within hours of Biden taking his first lead in Michigan Wednesday morning, a group of more than 100 Republican challengers could be seen descending the escalator towards the counting center, seeking to join ranks with more than 200 challengers already roaming the cold, concrete floor.

COVID-19 restrictions limited the number of challengers allowed, sealing a mob of mostly Republican challengers behind a tall panel of glass windows, as they pointed and yelled at poll workers, police officers and press alike, before signs were used the by poll workers to block the view of the crowd on the on the other side of the window.

“We need to make sure all votes are counted,” said ballot counter Sheila Winters, 66. “We’re not going to stop until we do just that.”

When word spread among the challengers of a Trump tweet announcing that his reelection campaign would be filing a suit in Michigan’s Court of Claims in an attempt to halt ballot counting in the state, an unidentified group began chanting “Stop the vote!’ before they were escorted out by law enforcement.

Intermittent cheers could be heard as more groups were escorted out of the Center, but a police barrier between the jeering challengers sealed behind the glass wall and the tightly confined press box left the question unresolved.

Those behind the glass continued to chant “stop the vote” and were pounding on the glass when, at 4:15 pm ET on Wednesday, CNN called Michigan for Joe Biden. The vote count has not been interrupted.

Truth in the crosshairs

Starting Tuesday evening, Trump barraged Twitter with a volley of messages that states are “finding Biden votes all over the place.” The platform has been adding labels warning that “some or all of the content shared in this Tweet is disputed and might be misleading about an election or other civic process.” And Facebook has added a prominent box to its homepage reminding users that votes are still being counted and that a winner in the presidential election has “not been projected yet.”

And yet, a percentage of the public believes what a president says whether it is factual or not. Rather, many of his supporters seem to value what they see as results over truth.

“I don’t think anybody tells the truth all the time. You know, sometimes you gotta exaggerate things a little bit to get your way,” a Trump supporter named Richard told GroundTruth reporting fellow Tracy Jarrett at a Trump rally in Dallas, Texas in December 2019.

Even back then, as an impeachment investigation loomed over the president, he drew on the populist notion that he was the mouthpiece of the people, and that defeat for him was a defeat for his loyal supporters.

Trump has provoked a significant number of armed supporters to commit sectarian violence and threaten more if Trump doesn’t win an election they have been conditioned to believe Biden would have to cheat to secure.

And unprecedented voter suppression by conservative leaders combined with aggressive confirmations of conservative judges to courts across the country has set the stage for Trump’s calls to cease the counting of mail-in ballots to be realized.

A chorus of journalists — including David Sanger of The New York Times, Margaret Sullivan of Washington Post, Matt Negrin at the Daily Show, Julia B. Chan at KQED, Versha Sharma at NowThis News and Robert Hernandez at University of Southern California’s Annenberg School — warned that this fundamental breach of protocol could further confuse and polarize the American public.

“The problem with the White House press corps is that they don’t ask good questions most of the time,” Negrin told GroundTruth. “They feel that their job is to get the president to make news, which is this terrible phrase in journalism that comes out of this idea, ‘Well the president is the biggest newsmaker in the world, so if he says something, if the president weighs in, it’s news.’ But it’s not news, it shouldn’t be news if it’s a lie. And then if he does lie, then the lie should become the news…”

Trump’s assertion that he’ll be “going to the Supreme Court” and wants all vote counting to stop is currently undercut by ongoing counts in states including Pennsylvania, Nevada, Michigan and Georgia which will tip the race one way or another. As of noon ET on Wednesday, Biden was expected to win 238 electoral votes, ahead of Trump’s 213.

The president already promised that he’d be “going in with our lawyers,” in a race that is both historically litigious and fateful for the future of liberal democracy in the United States.

The Supreme Court has already shut down efforts to limit vote counting in Pennsylvania and North Carolina in 5-3 decisions, but those rulings did not include new justice Amy Coney Barrett, Trump’s nominee to replace Ruth Bader Ginsburg.

Brett McGurk, a lecturer at Stanford University who served in the State Department under Presidents Bush, Obama and Trump, put it this way: “Trump says stop counting where I’m winning but keep counting where I’m losing. Biden says count all the votes regardless. One position is consistent with the principles of democracy. The other is not at all. It’s that basic.”

Will Sennott contributed to this story from Detroit, Michigan.