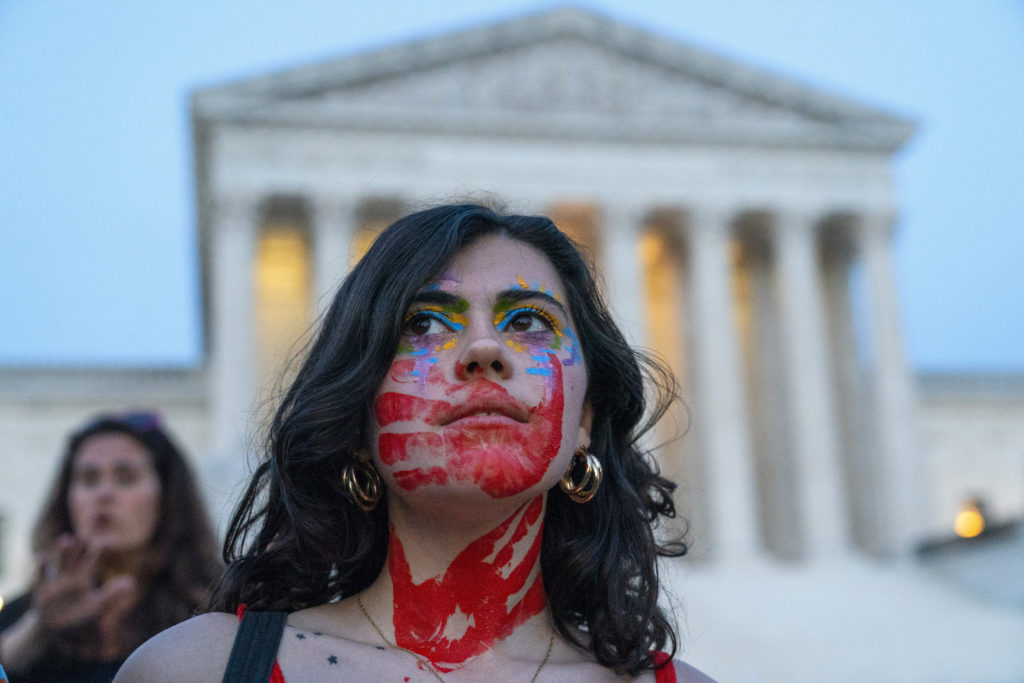 Lia Marie Flora Johnson of Leesburg, Va., wears red hand prints to represent violence against women, while joining demonstrators in protest outside of the U.S. Supreme Court Tuesday, May 3, 2022, in Washington. Photo by Jacquelyn Martin/Associated Press.

Accurate, sensible, and tactful reporting on sexual violence and harassment is more relevant than ever after the overturning of Roe v. Wade, the 1973 landmark legislation which protected the right to an abortion in the United States. But an entire generation of journalists that grew up with Roe as the law, are now discovering that they’ll have to adapt to completely new reporting grounds.

According to the Center for Disease Control and Prevention, almost 3 million women in the U.S. experienced rape-related pregnancy during their lifetime, and the prevalence of it was similar across racial and ethnic groups. Now that abortion is no longer legally protected or is highly restricted in some states, women might suffer even more intensely the consequences of being sexually assaulted or abused. The state and local laws not only limit abortions, but could create a whole new set of legal ramifications and risks for victims, their families and journalists looking to tell their stories.

For this edition of Navigator, we asked several journalists, writers, and researchers to share their insights on how to approach and cover sexual violence and harassment now that Roe v. Wade has been overturned. Their responses have been edited for length and clarity.

The role of journalists

Before we talk about covering sexual violence and harassment, it’s important to mention that there are roles journalists are claiming and reclaiming in today’s political and social climate, prompted by the changing legal landscape surrounding reproductive rights.

One of the key roles of journalists in the post-Roe world is to be information providers and to make sure that women have the tools and information necessary to access the care that they need, said Kaz Weida, freelance journalist, writer, and #MeToo advocate covering a variety of topics including gender equality, reproductive justice, and women’s health.

“Women who need either emergency care, abortion care, whatever that is,” Weida said, “I want as a reporter to make sure that the information is out there, that they have the tools that they need, and that they can go and do what they need to do.”

Other reporters, like former Report for America corps member Becky Jacobs, also pointed out that reporters should focus on telling the stories of the people touched directly by the decision.

“It’s affected so many people, in Utah and across the country, and so that’s really what I’ve focused on: what are the voices of the people who are directly affected and telling those stories,” said Jacobs, who covers women’s issues and the status of women in Utah for The Salt Lake Tribune.

But telling those stories requires more than just determination, especially when the lack of reproductive justice meets issues such as sexual violence and harassment. Here are some tips from our experts on how to approach these topics in a sensible, yet persuasive manner.

Be aware of your biases

One thing to keep in mind when going out into the field to cover women’s issues of a sensitive nature is your own biases, said Nicole Froio, a Brazilian independent researcher and freelance journalist.

“When you’re writing a story, don’t get so stuck on these ideas of womanhood that everyone says encourage or discourage rape or sexual violence,” she said. For example, when reporting on a rape victim, dedicate more of your time and copy to discovering and reporting on the details of the assault as opposed to describing what the victim was wearing, Froio advised. This avoids furthering narratives that put the blame on the victim and centers your story on the facts relevant to the case.

No one is exempt from these biases, said Froio, which makes vital for journalists covering sexual assault to be self-aware and examine their approach to victims and perpetrators.

“Be aware of the biases around gender that you learned and you internalized, because we’ve all done that: we’ve all internalized logics that justify gendered violence, and you have to be careful for them not to show in your reporting and for your allegiances to be on the right side,” she said.

Understanding the impact Roe v. Wade’s overturning has on victims and taking that into account when interviewing is key too. “What’s important for journalists to keep in mind is that when a sexual violence victim is denied an abortion – that is a further traumatization that she’s going through. She is going through another experience of not being able to control her body, of not being able to have bodily autonomy,” Froio said.

Be transparent and give control back to the victim

Because victims of sexual violence have been gravely traumatized, reporters must approach them with the utmost care, respect, and sensibility. Being as transparent as possible and putting control back in the hands of the survivor came up as the most essential thing to do when covering his or her story. And that might come at the expense of getting a complete, detailed story.

Madison Pauly, a reporter for Mother Jones covering criminalization, sexual violence, and gender issues shared her experience reporting on sexual violence and harassment before the overturning of Roe v. Wade, which she thinks has gained a new importance today.

“We’re not just talking about rape survivors who can’t get an abortion afterwards. We’re talking about this broader lack of control over our bodies, whether that’s at the hands of another person or state laws,” she said. “The root of what’s happening to women and other people with the capacity to get pregnant is the same as what’s at the root of sexual violence.”

Due to the fact that control has been taken away from survivors on multiple levels, reporters need to make sure that they give it back to them and provide them with a sense of security.

“Before the interview what that means is, ideally, a lot of transparency – even more than I would with another story as far as talking about exactly where I am in the reporting process,” Pauly said. “So if it’s just an idea and I’m not even sure that it’s going to lead to a story – being very upfront with that.”

Pauly also said that it’s important to be frank about what formalities such as “going on the record” mean, what “on background” means, and having conversations about anonymity.

“‘On the record’ with somebody who is talking about personal trauma, who doesn’t have media training and is not savvy about talking to journalists – if they want to take something back, I will generally let them,” Pauly said.

Privacy and legal considerations go hand in hand with transparency and a new crop of these issues have arisen as a result of the overturning of Roe v. Wade.

“Reporters more now than ever are going to be especially careful about how they safeguard their sources,” said Kaz Weida. “Because these are women who are really going to face significant consequences if their identity is exposed.”

Weida said reporters should go into all situations prioritizing the ways in which they’re going to legally protect their sources and assure them that their identity is going to remain anonymous if they choose to go on the record. Especially since the legal and other ramifications of talking about abortion specifically are still quite unclear.

Be meticulous with your fact-checking

In addition to safeguarding their sources, reporters must put special care in their fact-checking because if the facts are off, the victim might be put in even more danger.

“The central issues here would be, always center what the victim wants and what the victim says, and for the love of God, if the victim retracts what she says, do not go ahead and publish it,” said Nicole Froio.

Madison Pauly echoed this idea and said getting more information where you can and confirming all details is essential. “Part of reporting responsibly is not exposing your source to attacks and threats and denials because their story has obvious holes, because you didn’t do your job as a journalist to do the fact-checking that you need to do,” she said.

A starting point for fact-checking should always be making sure that the victim’s allegations are supported by as many sources and facts as possible. Going through the due diligence of checking for inconsistencies, particularly in cases that require anonymous sourcing, not only helps to make sure you are doing justice to the story, but can also help you avoid the trap of reporting on a false allegation. Rolling Stone’s retracted story about a rape case at the University of Virginia is an example of the consequences insufficient fact checking can have on sources, your own career and perhaps most importantly, in the trust readers have on journalists to report these cases accurately.

Be a human being

While fact-checking and protecting privacy are important, the one thing that all of our experts reiterated is the need to listen, be present, and simply be a human being. Issues such as sexual violence and harassment have gained a whole new significance after the overturning of Roe v. Wade, and victims now more than ever need real support and understanding.

“Whether that’s crying if you feel like crying with them,” Madison Pauly said. “That’s not you being a bad journalist. That’s you being a human first.”

Even if you can’t relate to the experience, coming as you are and trying to understand where the victim is coming from is the best way to walk into conversations with survivors.

“Reading about how PTSD might interact with the person that you are interviewing is really important,” said Nicole Froio. “Understanding that the person you’re speaking to is talking about the most difficult and most humiliating period of their lives. That is something that requires a lot of care and it requires a lot of gentleness.”