How to report on Indigenous communities with tact and nuance 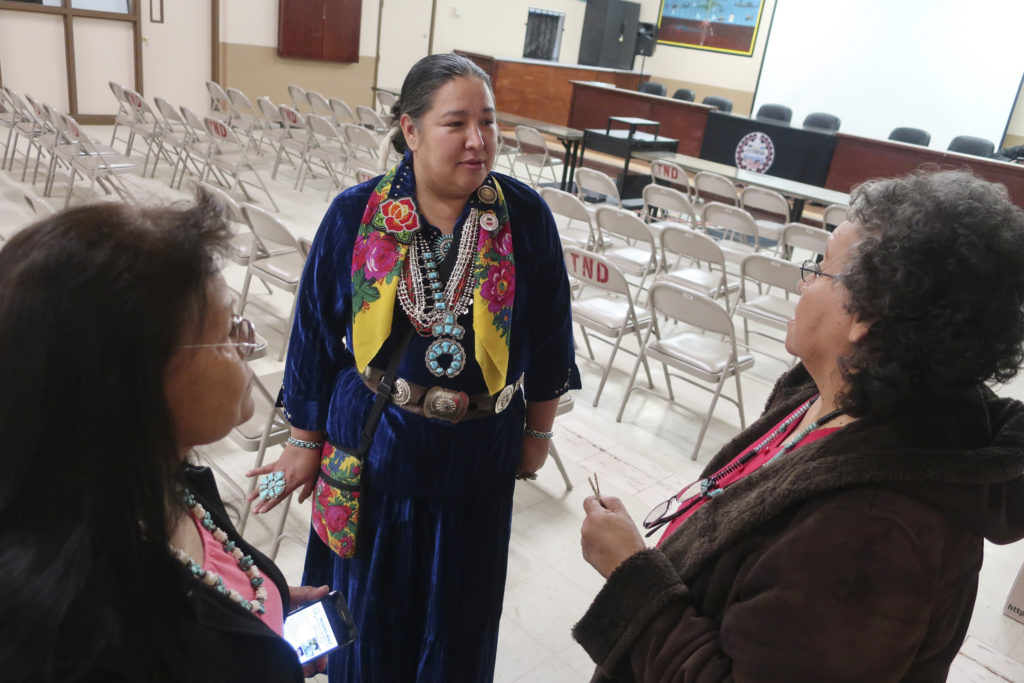 To report effectively on tribal communities, you should learn how the tribe passes laws and what their legislative process is, among other aspects of culture and government, said Brewer (Photo by AP/Felicia Fonseca)

Graham Lee Brewer’s pinned tweet reads: “As the media industry grapples with its lack of inclusion, just a friendly reminder that less than 0.5% of newsroom employees in this country are Indigenous.”

Brewer, a member of the Cherokee Nation, has been working for years to increase that number, as part of the board of directors of the Native American Journalists Association, and in his dual role as editor of KOSU’s Indigenous Affairs team and associate editor at High Country News. Supporting and training Native journalists goes hand in hand with educating non-Native reporters  about how to approach coverage of Indigenous communities with nuance.

For this edition of Navigator, we spoke with Brewer, Lenzy Krehbiel-Burton, who also sits on NAJA’s board and Shondiin Silversmith, a former GroundTruth intern who grew up on Navajo Nation and is now the Arizona Republic’s Indigenous Affairs reporter. Each of these journalists discussed with GroundTruth how to better report on Indigenous communities as under- and misrepresentation plague the media. Part one of this two-part column offers a look at practical, on-the-ground advice while covering Indian Country, and part two will examine the work that must be done in newsrooms behind the scenes to get to the root of the problem.

“Know whose land you’re on.”

There are 574 federally recognized tribes and, according to the National Conference of State Legislatures, 64 additional tribes that have created a formal process of state tribal recognition as of March 2020. Each tribe has a different government, culture, set of traditions, belief system and relationship with the media. Effective reporting requires a nuanced understanding of these differences to avoid perpetuating the stereotype that Indigenous peoples are monolithic.

On Indigenous Peoples’ Day, NAJA put out their Tribal Nations Media Guide, which serves as a checklist of questions reporters should answer about the Indigenous communities they are covering. The guide is divided into six sections: Government, Economy, Geography, Treaties, People and Culture. Brewer said he worked hard on the guide because he “wanted reporters to look at it and realize that just by the nature of reading the questions on it, that maybe they had been thinking about these tribal nations in the wrong way.”

When he was a capital reporter covering the Oklahoma State Legislature, Brewer had an understanding of how the Legislature passed laws before entering the capital. The same practice applies to covering tribal nations, he said. According to Brewer, you should know the following: how the tribe passes laws, who their head of state is, where their capital is, what their legislative process is, if they have a treaty with the government and if they call themselves citizens or members. “Cultural questions are important to answer, don’t get me wrong, but again, this is a government that you’re covering. And it’s not held to the same transparency and open-record laws that local and state and federal governments are, and so it really behooves you to know the intricacies of how it operates as best you can.”

Finding the necessary information to cover tribal nations differs between tribes, as some don’t have very robust websites, said Brewer. Sometimes you can go to the tribe’s court system. For instance, the court system of his tribe, the Cherokee Nation, provides side-by-side comparisons of the different versions of its constitution, which has been ratified a couple times. He said this is a helpful guidebook to see how the tribe is adapting and evolving. And other information in public documents can then be gleaned from the court system. If a tribe’s constitution is not made public, ask the tribe where that needed information can be found. Oftentimes, according to Brewer, this can be from a local academic or an attorney.

Reporting in Arizona, Silversmith said that, of the 22 tribes in the state that she is responsible for covering, some are more private while others are more willing to allow outsiders in. Being from Navajo Nation, she is used to the access that reporters get, so one of the biggest challenges in her beat is making connections with those in tribes that are not used to having media coverage.

Related: This guide from NAJA provides appropriate Indigenous terminology for your reporting.

Silversmith recommends diversifying your sources by looking at local articles that have been written about the particular issue you are covering. “A lot of Indigenous communities already have tribal newspapers. So when you’re able to find stories that have been done about this particular topic, but on a very local level, you’ll be able to identify local sources.”

Silversmith adds that search engines can be used to find universities that are serving a high Indigenous population, which usually has a diverse staff or faculty with Indigenous perspectives. Check to see if a local university has an American Indian Student Association chapter or if there is some sort of Indigenous organization in town, said Krehbiel-Burton. In addition to sitting on the board at NAJA, Krehbiel-Burton is a Cherokee Nation citizen who covers education for the Tulsa World in Oklahoma.

Brewer also suggested checking out the tribe’s cultural center if they have one. The director of such a center can probably tell you who to look for, whether a local Native activist or community advisor – people who are going to be better connected than anyone else you will come across as a reporter, said Brewer. And once you are in contact with them, questions like ‘‘Who are the historians you read or listen to?’’ and ‘‘Who are the elders that you think know what they’re talking about?’’ can guide you to information that is going to be helpful for you, he said.

Related:  NAJA’s “So You Need an Indigenous Expert” guide will help you with successful sourcing.

After you suss out who and where are the experts, eliciting a response comes next. The cultural norm of expecting a source to respond to you in Indian Country does not exist as it does in the United States, where a fundamental understanding exists that a government official has a duty to respond to a member of the press because not only does it look bad if they don’t. While Brewer says a part of democracy is a healthy and transparent press, ““those concepts…didn’t manifest in the same way that ours did. It’s just a fundamentally different history and culture that doesn’t always apply.”

Indigenous communities’ relationships with the media vary among tribes, and so does the trust between Indigenous sources and reporters. When asked how reporters can help begin to break down that mistrust, Brewer said the only real answer he has is “just showing up.”

He and Tristan Ahtone, former president of NAJA, advocate for showing up to events if you are new to an Indigenous community. For example, when Brewer covered the prison system for The Oklahoman, he would spend one Sunday a month attending a support group for people whose family members were in prison. Just talking to people led to some of the best stories he ever got, he said. The same thing is applicable to Indian Country, whether you attend a couple protests, celebrations or even funerals, to show people that you are there for the long haul, he said.

Silversmith said the opportunity to attend events is one afforded to local reporters in a way that it isn’t to, say, somebody coming from the New York Times. You can introduce yourself to community members and not just members of the tribal government. Reaching out to Jonathan Nez, the president of Navajo Nation, for example, is great, but that doesn’t help you connect with Navajo families, she said.

Social media is another way to introduce yourself if you have to do so from a distance. “If there’s one thing that Indigenous people like to do in Indian Country, it is communicate through social media,” Silversmith said. Local community Facebook groups or the Facebook pages for tribal leaders can hold information about what matters to the community, especially within the comments on the posts. “I think especially in Indigenous communities, the tribal leaders have a really good repertoire when it comes to communicating with their citizens, especially on social media. They try to update people as frequently as possible, because that’s the easiest way to get in contact with them,” she said. For example, leaders of the Gila River Indian Community and the Salt River Pima-Maricopa Indian Community put up videos on Facebook regularly to talk about COVID-19 or other events that are affecting the tribes.

“Stories are a resource,” Krehbiel-Burton said. And future reporters must atone for those who show up, help themselves to the stories of Indigenous communities and then leave. Before getting to the point where you can pick up the phone and chat with a source who is comfortable with you, you must do the work to establish trust.

Bottom line: Do your prep work, preferably well in advance of your interview. But even taking five to 10 minutes in a worst case scenario to do some basic background research is better than none at all. Most importantly, said Krehbiel-Burton, listen with an open mind. “And that may mean having to check some preconceived biases.”

The pre-work hardly changes when it comes to quick-turn stories. Krehbiel-Burton said her advice may even seem contradictory: “It takes a whole lot of precious time.”