Tips on how to report on a protest 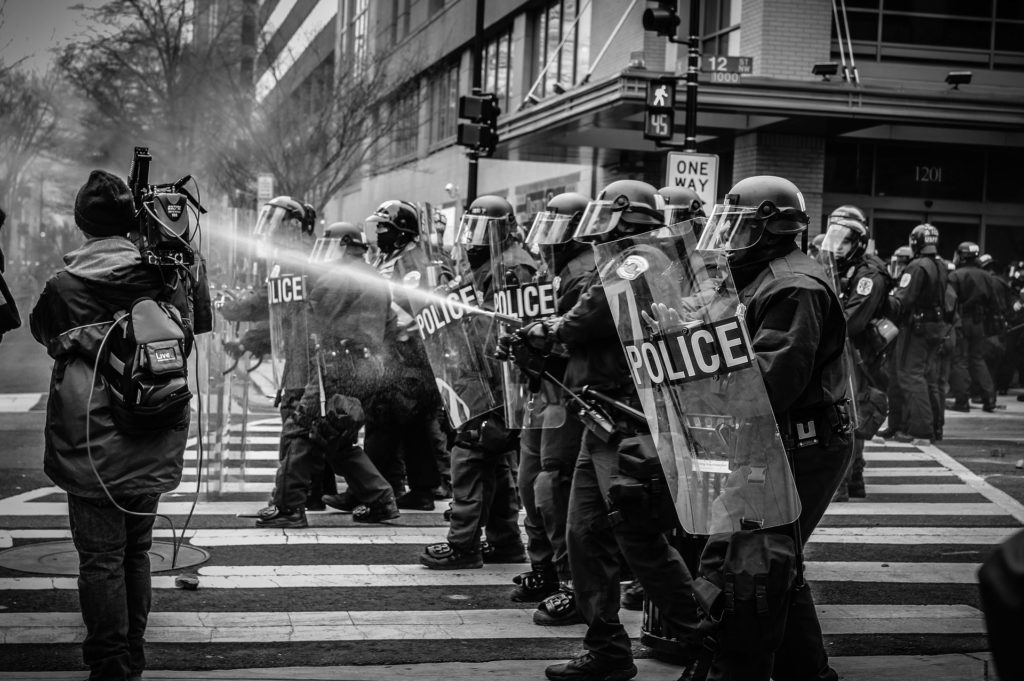 Preparation is key to to report on protests. By knowing the protestors, and the context, you can be more effective (and safe) on the ground. (Photo StockSnap/Pixabay)

Milan Polk is an Emma Bowen and Democracy Fund Fellow with The GroundTruth Project. She asked Tom Rosenstiel, an author, journalist and researcher who serves as executive director of the American Press Institute, about covering protests, especially in light of Charlottesville. Rosenstiel has reported on politics and media for decades and is the co-author of “The Elements of Journalism: What Newspeople Should Know and the Public Should Expect.”

For young journalists, a protest can be an overwhelming and possibly dangerous situation, where their emotions and awareness are put to the test. Being prepared is key, not only to report accurately the protesters’ views and provide context, but to react to unforeseen developments and stay safe. Here are some tips:

1. Do your homework before you go.

If you don’t know anything about who you’re covering, you won’t get an accurate portrayal of who they are and why they’re protesting. Doing research beforehand can help you when you interview a participant or organizer, and make it easier to explain to readers when you sit down and finally produce your story.

“There’s a whole vocabulary on political movements that is important to understand, Rosenstiel says. “It’s possible that certain words mean something to the crowd and are code words in a positive or negative way. You need to know what that language is.”

At the 2017 Charlottesville rally, for example, neo-Nazis chanted “blood and soil,” a German Nazi slogan about an ethnic group’s bond to their country. Terms like this may not be well known to those not involved in the neo-Nazi group.

2. Give context to protestors’ opinions.

There is an ongoing debate on whether or not to cover groups that advocate hateful or discriminatory speech. Rosenstiel says you just have to be careful with how you report on it.

“The answer is usually not to ignore them, but it’s to cover them with enough context that people can understand the meaning of the event. So the answer to something like Charlottesville is not to say, ‘Oh I don’t want to cover this because it gives people publicity,’” Rosenstiel says. “It’s to cover it in such a way with such sophistication that you can explain why this small group of people would go to a place like this and actually pick a fight.”

Examples of thorough reporting include The New York Times, which broke down where the event took place, and how violence broke out. Another piece from NPR, went in-depth on the reason why protesters were there, and the aftermath of their violence.

Reporting on a protest requires staying calm under pressure and putting away personal opinions. Rosenstiel likens it to other professions with ethical standards.

“If you’re a police officer, you’re there to protect and serve, if you’re a lawyer you have an ethical obligation that everybody deserves a defense, even people who you think are terrible,” says Rosenstiel. “So this concept that you have professional training and can rise above your personal feelings is hardly alien and in no way unique to journalism.”

4. Stay close to the action, but keep yourself safe.

When you are at a protest, you should place yourself near the crowds.

“You need to get close enough to sort of feel the crowd and be in the crowd, and if you’re standing behind a rope line where all the journalists are, you’re a part of the furniture, and you’re not really observing a thing where you’re going to get much,” says Rosenstiel.

On occasion, protests can break out into violence. Despite your obligation to cover the event, “There’s no story worth dying for, and there’s no story that’s worth getting beaten up for,” says Rosenstiel.

If the situation gets dangerous, you should worry about your safety more than the story. “When you are in harm’s way, you need to get out of there quickly and not get yourself in a place where you can’t quickly get to safety,” Rosenstiel says.

You should contact the protesting organization as soon as you can. Preliminary reporting ensures you’ll already have quotes and information on the event, and can make it easier if you find it difficult to talk to people at the event.

“If you’re doing a protest and you’re trying to talk to the organizers for the first time at the protest, you’re not going to get much from that,” Rosenstiel says. “They’re going to be too busy,  have way many more important things to do, and you’re a stranger to them.”

Rosenstiel also notes there is nothing wrong with consulting an expert before the protest and admitting what you don’t know. “It’s amazing how powerful it can be to say I’m a young reporter, and I’m covering this thing, and I don’t want to do it badly, and can you tell me anything in advance,” he says. “The fact that you’ve done that, will impress a source, particularly a source that’s an expert in a field.”

When you’re at the event, it can be scary to approach strangers. However, if you’ve prepared beforehand, it might ease some of the tension and give you confidence. Rosenstiel suggests contacting the host organization and asking for possible contacts. He also recommends trying to find a guide, a participant in the protest who doesn’t mind spending time with you, possibly introducing you to other sources to speak with.

“You go to the protest with them and you say, ‘This has been great,’” says Rosenstiel. ‘I spent 20 minutes with you, I really appreciate your time and you introduced me to a bunch of people. I talked to them, and they wouldn’t have spoken to me otherwise, thanks a lot.’”