Making compelling food journalism through sound, according to ‘The Splendid Table’s’ Jennifer Russell 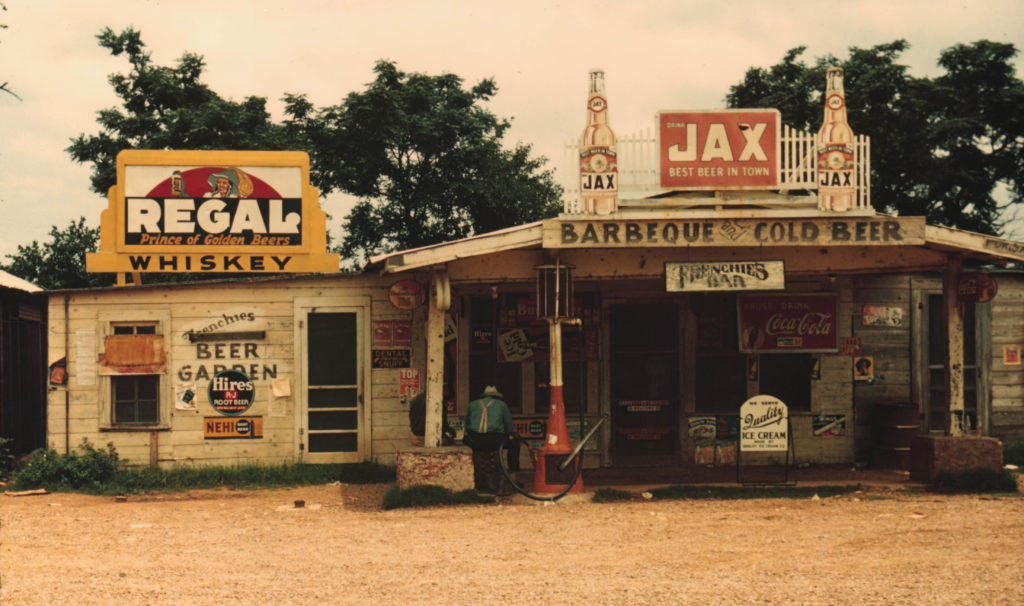 "Frenchie's Bar", a crossroads store, bar, juke joint, and gas station in the cotton plantation area, Melrose, Louisiana ca. 1940. Juke joints were featured in an episode of 'The Splendid Table' discussing them as a crossroads of food, music and people otherwise divided by race and class. (Photo by Marion Post Walcott / Farm Security Administration)

Jennifer Russell is one of the founding producers of the pioneering public radio food program The Splendid Table.

Starting out nearly 25 years ago, when the Food Network was only in its infancy and America hadn’t quite defined its food culture, the radio show quickly became a go-to for foodies, chefs and restaurateurs. But the program hosts more than discussions about savory meals, it often explores the connection between food and society, and the role our meals play in sustainability, climate change, culture, economics, and even mental health.

For this week’s Navigator, we asked Russell about her process for finding and creating compelling stories with food as the main course — for an audience that can’t see, smell or taste the content. The interview has been edited for length and clarity.

You started your career in public television — what was it like transitioning from that programming to talking about food on the radio?

I came out of the womb a foodie and waited tables throughout high school and college. In college, I had a catering company. So food was always one of my big interests. I studied journalism and communications and thought I wanted to go into television, which I did. Right after I graduated from college, I had an internship at Twin Cities PBS, where I worked for free, waited tables, got up at 5 a.m. to do the morning shift at a local hotel. I was really fortunate to be hired on as a production assistant and, ultimately, when I left, I was working as an associate producer. I got a great experience there.

It was a former coworker, a former boss from public television that put me in touch with Sally Swift, [co-creator and managing producer of The Splendid Table]. Sally said, ‘I’m gonna hire you for a month,’ and, here we are, almost 25 years later.

There were radio program directors, who said ‘Huh? What? How are you going to do a cooking show on the radio?’ and I think it became apparent that food is not just about cooking, and eating. There’s so much more, and having Lynne Rossetto Kasper [the founding, award-winning host of The Splendid Table and the author of a plethora of best-selling books for foodies] at that point, we were really fortunate — she had established really great connections, and was a well known voice and expert, and very well respected. Less than a year in, to be able to have Julia Child, this legend, on the show was pretty, pretty great.

For readers interested in audio production and storytelling, what are some ways you make food compelling in this medium?

Oftentimes, the person you’re interviewing isn’t even in the same room. A host is in one studio, the guest is in another studio across the country — or in a different part of the world — and there is no physical connection or sharing of food. So, first of all, if you’re going to have a conversation, it has to be a good conversation.

You also need to have the luxury of being able to go out. We took some great trips, like when we went to Italy with Lynne. That’s a completely different experience, because you’re on the ground, you’re in the kitchen, you’re cooking, and you’re tasting so you get this conversation in the story, but it isn’t taking place in the studio. It is taking place over this ancient stove with these beautiful women who have been making pasta for decades.

And it’s interesting, now, as I listen, there are so many food podcasts, and so many great food podcasts. And it’s really interesting as a maker — and a consumer — to listen to how people are doing things so differently. We never used sound effects, just because it didn’t feel authentic.

If we’re going to be using sound, typically, it’s sound that’s really happening. Francis Lam, our new host, who’s out of New York, [is] recording in a lot of kitchens and really getting out and about. He did a piece in a yogurt factory about whey and food waste. That’s really cool, because we can incorporate those sounds, other voices that might be in a plant or a kitchen or a restaurant.

What’s something that emerging journalists can easily get wrong about covering the food beat?

I think it takes some time. Nowadays, people want to go from graduating with a journalism degree to becoming a big food writer or producer in a very short time span. I really do believe in putting in some time and getting some experience working with others who are more experienced and being really curious. When people are passionate about food and want to write about food, or produce on-demand programming about food, it’s important to know about food, the basics, and people that are involved on different levels — what’s happening here in your backyard, what’s happening nationally, globally. It takes time. So be curious, listen, ask questions, try new things and travel, if you can.

Something that really caught my attention during the recent episode, ‘The Importance of Eating Urchins,’ was this idea that host Francis Lam put forth — that ‘deliciousness’ can be a real problem when talking about food. What can food reporting be beyond an appetizing plate?

Food is a subject that is so broad. I mean, we have talked to scientists — that piece that you reference with Ali Bouzari, who’s a food writer and scientist, about sea urchins is a really great example of that. Food intersects with so many different things. You look at issues like global warming and how that is affecting our food sources. There are so many stories there — from water to dead zones in the ocean to consumption of foods that are taking lots of water. And then speaking with writers or artists, other journalists, bakers — there are so many, so many things to cover. So many great stories.

That’s another example of a story that maybe hasn’t been told, and how food really was such a central part of that time period. And those juke joints were a place for people to come together and make music and make food and eat and celebrate and live their lives. There are so many interesting lenses and food plays a part in so many of them.

[Another example] is when we did an entire episode around food and mental health back in May, which I had to really push for. It was territory that we hadn’t really stepped into or explored. I think people were nervous about it. But that’s a good example, too, of a way that people would think, “Oh, mental health and food?”

In this world with so much bad news and everything feeling so divisive, food is so celebratory. It’s an interesting, deep subject that connects us on so many levels.