How to avoid amplifying misinformation in your stories 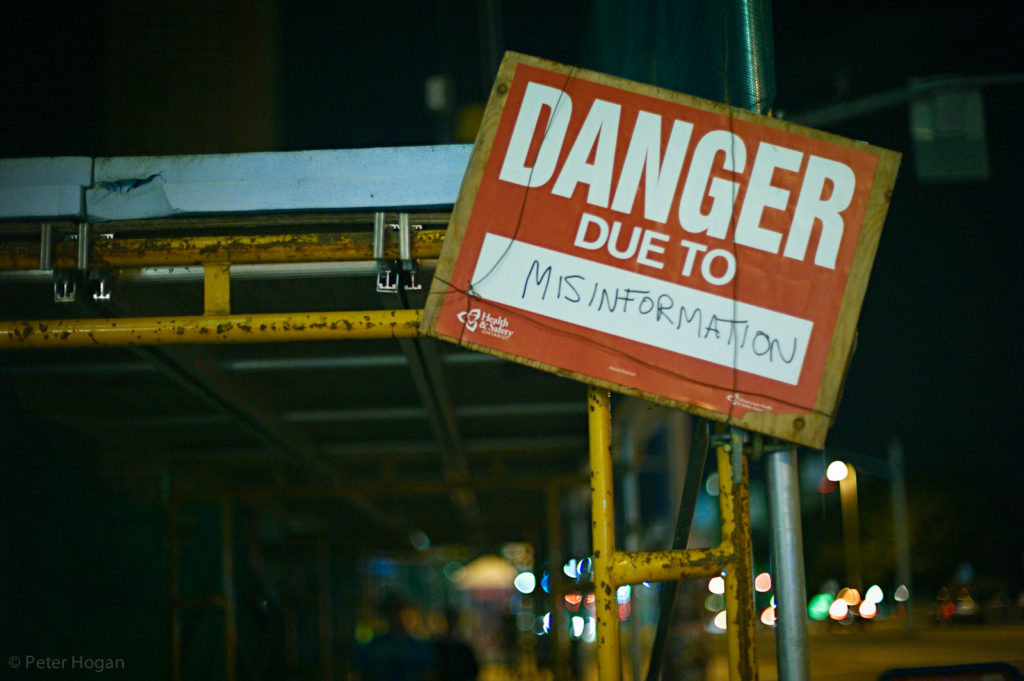 The speed and volume of information being shared online, makes it vital for journalists to approach every claim with a critical mind. (Photo by Peter Hogan/Flickr)

The current conditions of the nation are epoch-making as a pandemic, an economic recession and the national civil unrest shift and reshape public discourse. With less than five months before a highly-anticipated pivotal presidential election, and in the shadow of foreign interference, the stakes of keeping the public informed have never been higher. So too, then, are the dangers of spreading or amplifying misinformation, and the responsibility of journalists to counter it.

For this two-part edition of Navigator, we explore ways to avoid those pitfalls with Anita Varma, the assistant director of Journalism and Media Ethics as well as Social Sector Ethics at Santa Clara University’s Markkula Center. We also spoke to Aaron Sharockman, the executive director of PolitiFact at Poynter. Their responses have been lightly edited for length and clarity.

Before tackling misinformation, a procedure to assess the claims on developing stories is key. Since Twitter is the most common platform for breaking news, Varma recommends it as a starting point for finding and quickly vetting information. She usually follows these steps:

See what NPR, The Associated Press or Reuters says. Quality-check their sourcing, looking for people that were present when the story happened and avoid information that has been mediated through different channels. See which sources are saying what through a Google News search, paying attention to the number of perspectives that are being shared in any given article.

As for D.C. politics, she looks at The Washington Post and then NPR, and from there she widens her search to smaller outlets across the political spectrum to gauge the responses to the story and compare their facts.

While fact-checking can seem like an obvious first step in determining the falsehoods, claims inside a story are often not black and white.

“Most claims that prompt some skepticism, or some question, usually can’t be checked so easily,” Varma said.

When a falsehood is reported, Varma recommends:

For example, in late-April, conflicting reports circulated claiming that California Gov. Gavin Newsom planned to close all of the state’s beaches. When he only closed some, some news outlets kept their inaccurate headlines, but updated the body of the story. “Since then, I actually don’t go to those news sites anymore,” Varma said.

Like Varma, Sharockman advises journalists to rely on their natural skepticism. He teaches his team at PolitiFact to “remove the first visceral reaction” to something they see online, whether it is a post they agree with and like, or one they don’t. The next step is to connect with more than one expert, Sharockman says. Rather than taking one expert at his or her word, the believability of the claim becomes stronger when 10-15 sources are in agreement.

It takes time and effort to build a source list, which can be difficult at a time when journalists are expected to produce multiple pieces a day. But you can incorporate this process into your daily news consumption, says Sharockman. He suggests taking notes when you see a possible expert that could be a good source for a future story, even if you don’t have a clear idea of what the story would be. PolitiFact provides a source list for every fact-check that it publishes. Sharockman recommends searching through those lists for experts that could inform your stories.

Now that you are sure you are dealing with misinformation, the question is: What to do about it?

Varma and Sharockman say it is crucial to swiftly correct misinformation about any group of people among marginalized communities because of the potential for harm.

Instead of linking to, quoting or directly responding to falsehoods, Varma may post an accurate source or article that is transparent about where the information is coming from and does not contain misinformation on the topic. A good rule of thumb is to start with what you do know based on multiple sources, publish the accurate information, and do not put the false claim anywhere near the top of the story, supposing people don’t read on, which is often the case, she said.

However, this approach changes if the person repeating the falsehood is a public official, says Sharockman. If the President of the United States or the Speaker of the House makes a false claim, for example, he is more worried about holding them accountable and presenting the facts rather than amplifying their false message because it has already been widely spread given their platforms and their following.

When making the decision to respond to misinformation or a conspiracy theory, there is a line between doing more harm than good. For figuring out where to draw that line, Varma asks not only what the stakes are for the marginalized groups of people that the claim may affect, but what issues must we bring to the attention of those who are not members of such groups? For example, the U.S. press across the political spectrum covers the border crisis even though we all do not have ties to people entering the U.S.-Mexico border.

Sharockman recognizes that on the internet, though, there are some conspiracies that would only become more oxygenated by publicly correcting them. In considering the cost-benefit of spreading misinformation even by correcting it, he looks at the topics of the day or general claims that people are posting online. If the false claims have expanded beyond small online communities and the usual forums for conspiracy theories into the mainstream, they see if their team can verify and refute the claim and act accordingly. One tip to minimize damage, according to Sharockman, is to avoid repeating the falsehood in the headline.

Report for America corps member Zak Podmore provides an example of how to do this in a recent article for The Salt Lake Tribune. The headline of the mid-May story reads, “As the Navajo Nation battles a COVID-19 onslaught, some Utah leaders cry conspiracy.” He addresses that a conspiracy theory detrimental to the health of the tribal community was spread by an official with a platform, but does not repeat the misinformation until the middle of the report. Instead, he leads with the voices of Navajo Nation officials, data regarding the effect of the pandemic on the reservation and the threat of nearby cities possibly reopening prematurely.

PolitiFact also works with the online platforms where such claims are made, like Twitter, Google or Facebook, to bring attention to the fact that those posts may not be meeting the platform’s policies.

Related: Check out Whitney Phillips’ “The Oxygen of Amplification: Better Practices for Reporting on Extremists, Antagonists, and Manipulators Online” for Data & Society. Her executive summary provides a guideline on when to amplify misinformation, as well as tips for establishing newsworthiness, reporting on objectively false information, and on specific forms of harassment or manipulation attacks.