How to adapt to the COVID-19 crisis: Advice from a Chinese car maker 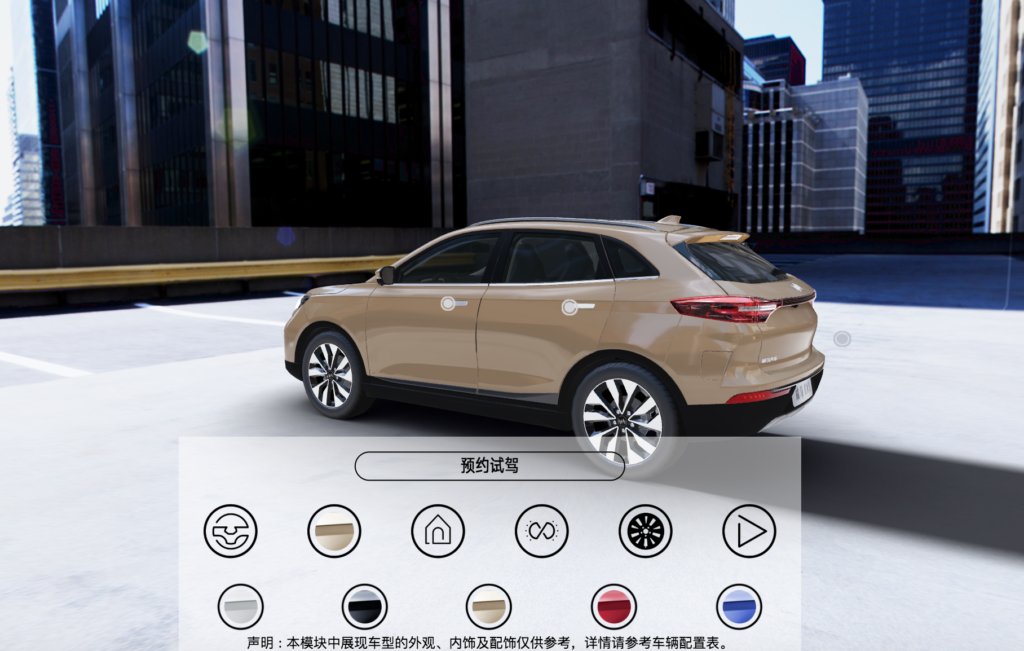 The virtual showroom created by WM Motor allows users to see the new mode up close and customize it. (Photo by WM Motor)

Editor’s Note: This piece is the second in a series on how Chinese businesses large and small have responded to the coronavirus pandemic, and what the world can learn from them. The project is a collaboration between The GroundTruth Project, the Committee of 100 — a non-partisan leadership organization of prominent Chinese Americans — and leading management adviser Douglas K. Smith, also the co-founder of Table Stakes and the Media Transformation Challenge at Poynter.

The onset of the COVID-19 outbreak found Freeman Shen in Wuhan, shaking hands with guests and employees at his company’s annual media appreciation gathering on January 8 and 9. Shen, founder and CEO of the electric vehicle company WM Motor, was celebrating the opening of his second factory and spoke with providers and journalists about his plans for the year. One week later, everything started to change.

The virus had been spreading silently across Wuhan since late December, but neither Shen or his team contracted it. The government had yet to make any announcements about an outbreak. But a week after returning to Shanghai from the event, Shen started to realize that something was going on and made a decision most other companies wouldn’t make until weeks after: stop production and close their offices.

We asked Shen to share some of the top insights and lessons learned from his company’s response to the crisis. His responses have been edited for length and clarity.

Trust the warnings from your people on the ground

Compared to the big Chinese automakers, WM, short for “Weltmeister” or “world champion” in German, is a small company, but it has an extensive reach and growth. With about 2,500 employees, and 3,000 suppliers, the company delivered 16,000 vehicles last year to dealerships in 80 cities in China during its first full year of operation. 2020 promised to be a banner year, until the COVID-19 outbreak started.

The Chinese government announced that the coronavirus was capable of spreading from person to person on January 21, but by then Shen had already closed his factories and had started to buy masks, disinfectants and screens that measure temperature on approach. This early response was possible because he paid attention to the warnings coming from his employees in Wuhan, despite not having official confirmation, erring on the side of caution.

“We basically shut down everything. We also started closing our stores. Most of our stores are franchised dealers, but we also have some that are directly managed. We closed because we didn’t know what was going on. And we just wanted to be cautious. […] We also started to talk with our supply chain, to make sure they are aware of this. Because we have operations in Hubei, we knew earlier and better than the other guys that something was going on,” said Shen.

The Chinese New Year holiday was approaching as well, which made it easier for Shen, already working remotely from Shanghai, where the company has its headquarters, to cease production and let his employees leave for their hometowns earlier than planned.

Many companies have flirted with the idea of full digitalization, but ended up abandoning or postponing those plans because of the importance of face-to-face interactions, elevated costs or the lack of an immediate need. Others resisted the transition to remote work. According to Shen, COVID-19 presents a unique opportunity to test the effectiveness of those strategies and perhaps find a new, more efficient way to work:

“We actually encourage people to do more online, as much as we can. As long as

our customers and users agree. We have been trying to do everything online, if possible, from day one, but this crisis will probably push us to think more about [what we can do] online. If anything we do can be more efficient,” said Shen.

In WM Motor’s case, the company had a plan to promote its new EX6 plus electric SUV and launch two more vehicles at the Beijing auto show in April, but the event, the biggest in the industry, was cancelled because of coronavirus fears. That forced them to move their entire launch online and develop a “VR showroom” where users can see the vehicle from every angle and explore its functions. “We had to change everything and [now] we’re trying to show everything online. We hope that we can attract people’s attention. That people are willing to look at our car in VR and then place an order online,” said Shen.

According to Shen, it’s still too early to assess if the move to online-only showrooms has been successful, but it was something that had been on the radar of the company for a while, given that several competitors, like Ford and General Motors, had already experimented with this format. The crisis just gave WV Motor an incentive to go for it.

With people asked to stay at home and all dealers closed, Shen’s team faced a unique challenge: How do you let people test drive a car, when you can’t have social contact? So they came up with what they call the touchless test drive: “A customer can place an order and we’ll deliver a vehicle to your front door or a parking space you identify. Then we’ll send you a code you can use to open the car and drive it. [When done] you can return it anywhere you want and send us the location back,” explained Shen, adding that the test cars are disinfected before they are delivered, again at the site of delivery and at the moment they are picked up to assure maximum safety.

Even though restrictions have been relaxed in the country, Shen believes it will take time for people to trust social interactions again and the touchless test drive will be key to allay the fears of potential customers. From a management point of view, the experiment also provided a template for rapid development that can be used for other projects. According to Shen, it only took about a week to go from idea to execution of the touchless test drive idea, leveraging the resources and expertise of their different units in a virtual workspace.

Reserve cash when possible. You’ll need it to help your suppliers

In a crisis, rules and previous arrangements are often modified to provide flexibility to companies. And in order to do business, one of the first requests from partners is to receive payments in cash, which they need to keep their companies afloat. That is why Shen recommends companies preparing their COVID-19 plans, particularly small- and medium-sized ones, to reserve as much cash as possible.

WM Motor has over 3,000 suppliers and some of them couldn’t get “whitelisted” by the local government. To be added to the list, companies filled out a questionnaire sent by the government explaining their importance to the business ecosystem and had to demonstrate that they were taking the required safety measures But some operating in Hubei province couldn’t get permission to restart their operations until this week, Shen said.

While they got back on their feet, WM Motor bought everything they had in stock at a higher price.

“You have to pay better because you want to make sure your supplier survives. If they have trouble and they are not working, they still have to pay rent, their employees and those sort of things. If they go into a bankruptcy situation, it would hurt us,” he said.

WM Motor’s coordination with their suppliers allowed them to restart production faster after getting whitelisted by the government. The first car left the assembly line a week after the Wenzhou factory reopened.

Despite the collapse of the market caused by the virus, Shen is maintaining his original goals for the year, believing that there will be a surge in orders coming from former public transportation users who would like to make the switch to being car owners.

“If you go back in history, you’ll see that once this type of virus is finished, there’s the possibility that people will want to go out and buy a family car,” he said. “They probably will feel uncomfortable taking public transportation. As a matter of fact, in the past couple of weeks in Shanghai, traffic jams are coming back. People say it’s kinda dangerous because there’s a lot of new drivers on the road that never drove before.”