Small-town tensions illustrate the threat of political violence in America 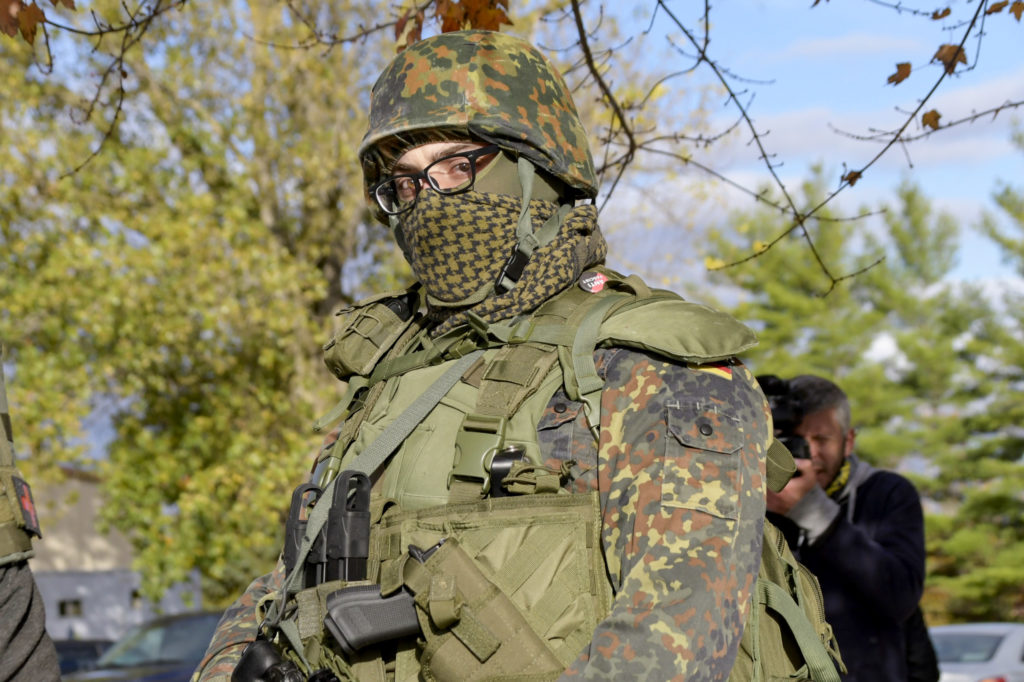 A member of Justice for Black Lives, who did not wish to be identified by name, wearing tactical gear and an ‘anti-fascist’ pin on his collar. “We don’t trust them. And we will make sure our community is safe one way or another,” said a Justice for Black Lives organizer at the demonstration. (Photo by John Rothwell)

ALLENDALE, Mich. — The two sides sized each other up in a town park flanked by a highway and a strip-mall, each in varying shades of military green tactical gear. On one side, a group identifying itself as Justice for Black Lives with placards and a penchant for blue bandanas. And on the other, a ragtag group of several militias sporting MAGA hats and unfurling an array of American, Trump and QAnon flags.

What was the issue that had these two heavily armed forces staring each down, a hair-trigger away from an outright firefight in a place described as a “sleepy, little town” by the West Michigan ACLU?

A dispute about the role of the town’s planning commission.

The International Crisis Group had never written about American domestic affairs in its 25-year history, but this week the independent think tank finally had a reason to do so.

The global conflict watcher released a report that claims this election has all the ingredients for unrest, cautioning that political violence might erupt during or even after Election Day.

And the concerns laid out in the report were nearly brought to life in this small suburb of Grand Rapids, where the two armed factions came face to face in the public square.

The 30-page report contextualized the kind of showdown that occurred here last Saturday, and made it clear that the threat of violence is not likely to subside even after the results of this bitterly contested election are tallied:

“Political polarization bound up with issues of race and identity; the rise of armed groups with political agendas; the higher-than-usual chances of a contested outcome; and most importantly President Donald Trump, whose toxic rhetoric and willingness to court conflict to advance his personal interests have no precedent in modern U.S. history. The risk of unrest may ebb and flow as the final days of the campaign unfold, but it is almost certain to remain, and it will increase if either side forms the impression that the vote has been rigged.”

The dispute in Allendale was all about a member of the town’s planning commission, a distinctly average looking  bureaucrat and suburban dad named Ryan Kelley who has placed himself at the center of the  maelstrom.

Tensions had been mounting since June when unrest broke out after the killing of George Floyd in Minneapolis became the latest killing by white police officers of an unarmed Black man. Local activists held a protest to demand the removal of a confederate statue near the town center. Kelley, the planning commissioner who was called on to issue the statue’s removal, instead invited the Michigan Liberty Militia to defend the monument.

Four months later, after13 men were arrested and charged by the state for allegedly plotting to kidnap Governor Gretchen Whitmer at her vacation home, it was revealed that the group, the Wolverine Watchmen, were an offshoot of the Michigan Liberty Militia. It is not clear if the groups splintered off to join the Watchmen or remained active in the Michigan Liberty Militia. But what was clear to residents of Allendale is that their planning commissioner, Kelley, had invited domestic terrorists into their town.

Kelley is a real-estate agent, and also the founder of the American Patriot Council, a group that coins itself as on a mission to “restore and sustain a constitutional government.” On their website, the organization has a “criminal watch list,” which includes Kamala Harris, Mark Zuckerberg, Gretchen Whitmer and other state officials. It also lists the hometowns of some on the “watchlist.” And the organization started the nationwide Freedom March, which has acted as a unifying series of events for the broad assortment of militia groups in the lead up to the election.

With a phalanx of militia in front of him and his two young children by his side, Kelley stood at the podium on Saturday and thundered his way through a speech, proclaiming, “We the people will not stand by and allow the freedoms that we have secured and enjoyed for so many years to disappear.” .

“We have many forces working against us,” he said.

A shotgun slung over his shoulder, Joe Banashee Cadreau, a Native American activist and member of Justice for Black Lives, looked across the town square’s parched grass at the milling militias, saying, “They are scared we are going to show them the same violence their ancestors showed to us, and that is a real fear.”

Most of the demonstrators on Saturday referred to those on the other side as their neighbors in this town with a population of 17,000. But these neighbors had brought weapons to their disagreement, ranging from knives and bear-mace, to assault rifles and shotguns.

As tensions rose and the chants grew louder, a small group emerged from the sea of red hats, country anthems and QAnon flags. Some waved from afar, trying to provoke a response, while three men with rifles attempted to march through the opposing protest. They were met by an opposing force that was a mix of Justice for Black Lives and elements of a paramilitary group called The People’s Defense League, wearing orange and green tactical uniforms. Aligned with the loose-knit movement known as Antifa, the force formed a practiced strategic perimeter around the demonstration taking up their positions behind trees and street signs.

The tension was broken up by the deputy sheriff, the only law enforcement on patrol in the park that day. Both sides reluctantly retreated to their opposing cluster of flags and signs. This time, no one pulled the trigger. But Hampton Stall, who studies militia activity and publishes daily reports on his website, MilitiaWatch, said that the threat of violence in this small suburb of Grand Rapids has not subsided.

“There has been a lot of military activity there. And a lot of these militias sort of repeat [patterns], and if they have been somewhere they are more likely to return to it.”

Editor’s note: The subject of the featured photo was previously identified as a member of the People’s Defense League, when in fact this person was affiliated with Justice for Black Lives.