ON THE GROUND IN SPOKANE, WASH

How the pandemic revealed social and health Inequities in Spokane 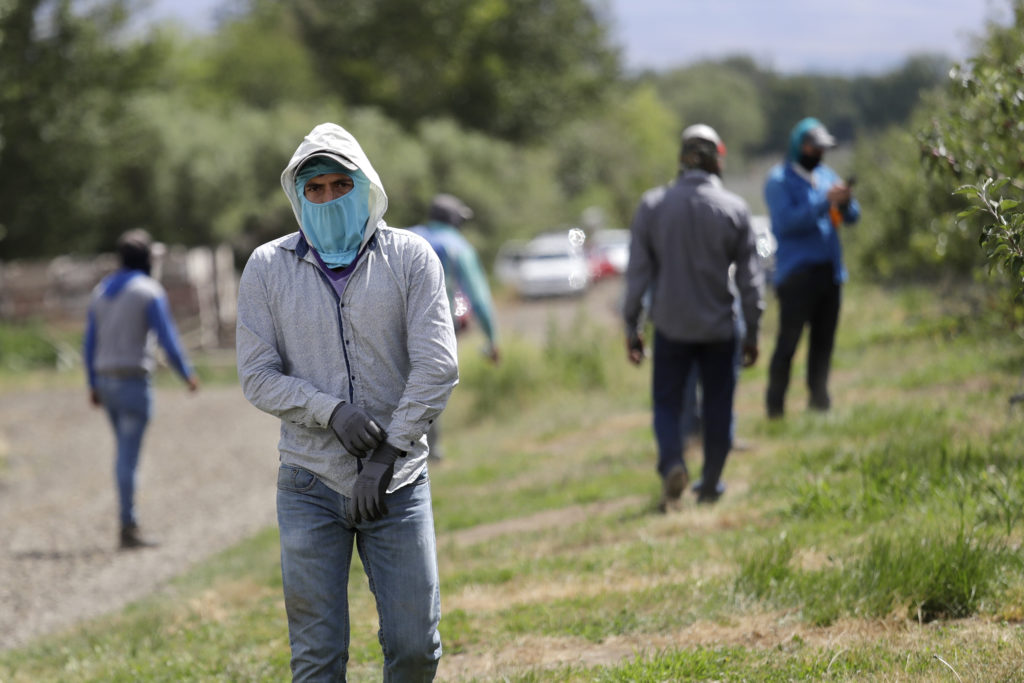 Workers at an orchard pull on equipment as they prepare to thin apple trees in Yakima, Wash. Many agricultural workers lack health insurance, making them more vulnerable to COVID-19 (Photo by AP/Elaine Thompson)

SPOKANE—Despite health officials in western Washington confirming the first case of COVID-19 recorded in the U.S., in January, Spokane County saw a delayed first wave of the virus, which hit later in the spring. Since then, the COVID-19 pandemic has continued to lay bare every weakness in the social fabric of communities nationwide, from housing insecurity to inadequate access to health care.

An estimated 5% of Spokane County residents, or 26,000 people, had no health insurance before the pandemic. So when the public health mandate was to “call your health care provider if you began experiencing symptoms of the virus,” for thousands of people in Spokane, there was no one to call.

This is where federally qualified health centers, primary care clinics that receive federal funding to provide care in underserved areas, showed themselves to be vital to community health in the midst of the pandemic.

“Part of our mission is serving everyone and doing our best to help with the health education piece and access to that,” Dr. Deb Wiser, chief clinical officer at the Community Health Association of Spokane, which operates several federally qualified health clinics in the county and city.

When COVID-19 came to the community, Wiser and the team at CHAS worked quickly to make testing both free and as widespread as possible to residents who do not have health insurance or access to care.

The NATIVE Project, a federally qualified health and Indian Health Services clinic, is a small but mighty operation that started as a behavioral health clinic 31 years ago, but slowly added more and more services to meet the growing needs the community faced. Today, it has behavioral and substance abuse services as well as full medical, dental and pharmaceutical services.

In March, when COVID was finally detected over the Cascades, staff at the NATIVE Project confirmed the first positive case of the virus in a Spokane County resident.

“NATIVE Project was ground zero for our COVID patients in this county,” Director Toni Lodge said earlier this summer. “It was the first clinic to test, and it was a tribal member from out of state who had it.”

In Spokane, as across the country, the novel coronavirus brought with it a realization that losing one paycheck, living without health insurance or in a crowded household could lead to the bottom falling out from under countless residents. It also meant that some residents were newly minted “essential” in their jobs, working at grocery stores, cafes and drive-thrus throughout the city.

Before the pandemic, 13.1% of Spokane County’s population was living in poverty, matching the federal poverty rate of 2018. This shakes out to more than 67,000 people. In Spokane County, more than 48% of residents spent 30% of their household income on rent. Therefore, one lost job, with no help, could mean seeking services from the city’s already strained shelter system for people experiencing homelessness.

Once the virus arrived and the entire state was shut down in April, many people lost their jobs. Some were furloughed indefinitely when the economy came to a halt, and lost income. Rent would go unpaid and threats of people losing their homes became reality.

Democratic governor Jay Inslee installed a rent moratorium, keeping residents in their housing units, even if they couldn’t pay rent. And then he extended it again, and again, through the end of the year. For many, though, the backrent they owe is still on the table, and politicians have not recommended plans for what might come next.

Social determinants of health, like housing and food security or access to health care, are vital to the health of all people, and disproportionately impacts Black, Indigenious and other communities of color, a reality the pandemic laid bare.

“Longstanding societal and institutional policies and practices that lead to health inequities, differences in health status between social groups that are unfair, avoidable and preventable lead to what is referred to as embodied inequality, discrimination and social injustice that lead to poor health outcomes that are multigenerational,” former Spokane County Health Officer Dr. Bob Lutz said.

Spokane is named after the Spokane Tribe of Indians, which has a reservation located about an hour outside the city, but the city itself is home to Native Amerians from several tribes and Lodge said her clinic serves people from more than 300 tribes.

Despite identifying the first COVID-19 case in Spokane County, the NATIVE Project was severely short of both personal protective equipment and testing supplies at the outset of the pandemic. The clinic only had a small amount of testing supplies that they were using on the sickest patients in March and April, and when the county offered temporary testing out at the fairgrounds, providers at the NATIVE Project would often send patients there to be tested.

The clinic, which is partially funded by Indian Health Services, was also sent expired N95 masks from the national warehouse.

“They say, ‘It’s good enough, use it,’ and we do, but our PPE is expired in our health care system, and that’s a health inequity,” Lodge said this summer.

Spokane is also home to many Marshallese people, who due to their unique federal status, do not qualify for many federal social supports, including Medicaid. They have been disproportionately hit by the virus in Spokane County, largely due to the historic inequities they have faced as a group.

Similarly, inequities continue to persist at a state, and local level. Washington state’s Pacific Islander and Hispanic populations continue to disproportionately get COVID-19, be hospitalized and die from the virus.

There are myriad reasons why this is the case, but the fact that their legal status does not grant them access to many social safety net programs, which became even more important as people lost their jobs, were forced into essential work or applied for unemployment. Marshall Islanders do not qualify for Medicaid, and while Congress might be making moves to change that,  being historically shut out of those safety nets already puts them at risk.

“They are a strong and resilient community to have to uproot their lives and family from the land that your culture and heritage and identity is connected to, as indigenous communities, that’s a lot,” Kiana McKenna, a local committee member on the Asian Pacific Islander Coalition, said this summer. “And to have the courage and resilience to come to a place where the language is different, the health care system is complex and promises have been made and not many have been fulfilled.”

There was no drive-through testing in a county with half a million people from July to November. The largest group of federally qualified health clinics in the county recently opened drive-through testing for residents with symptoms, exposures or those that work in long-term care facilities, as case counts surge locally. Federally qualified health centers offer the vast majority of free testing available to residents, like the NATIVE Project and CHAS clinics.

The stakes could not be higher for communities with limited access to resources, people struggling to keep the heat on this winter or work in a dangerous essential job.

Lodge described one of her clinic’s patients who died from COVID-19.

“He was an elder. One elder lost is like a library lost—one person’s language of knowledge and language is gone,” she said. “I am begging for more testing, more resources and continued funding to undo those generations of trauma and health disparities.”