ON THE GROUND IN MYRTLE BEACH, SC 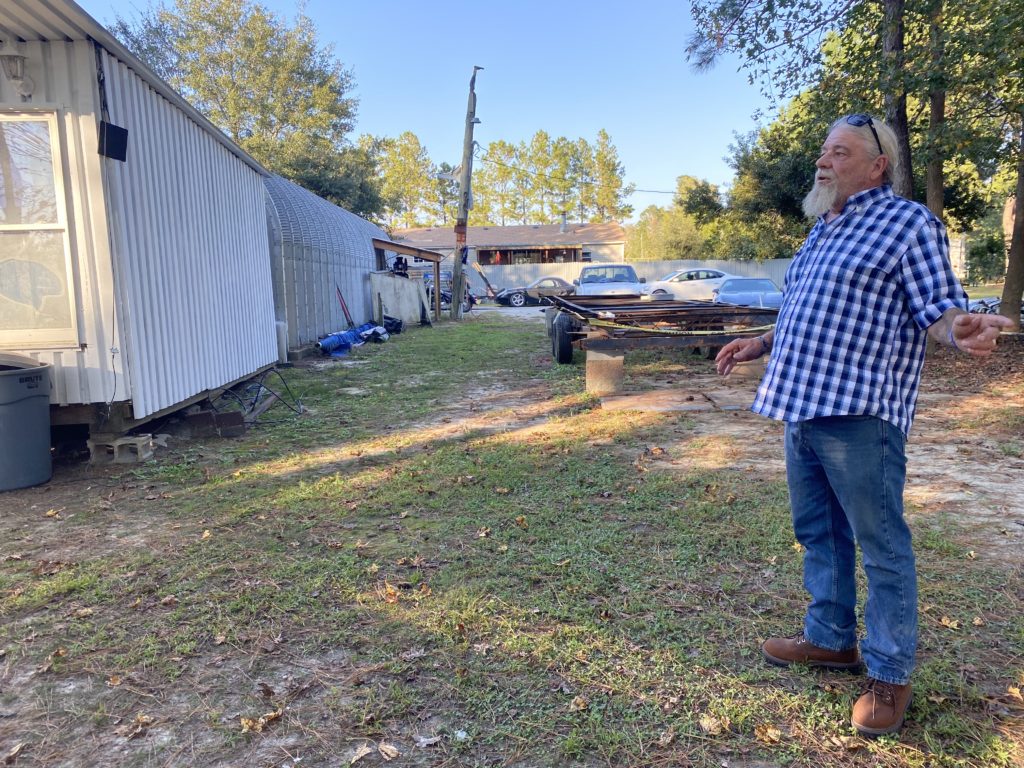 Jimbo Boudreau, who owns and operates the nonprofit Free Ministry, addresses the men living on his land. He says his organization has seen more than 4,000 recovering addicts in its 12 years. (Photo by Mary Norkol/GroundTruth)

MYRTLE BEACH, S.C. — For some, the path out of rock bottom addiction starts in the middle of nowhere.

The western side of Horry County may be less than 40 miles from Myrtle Beach, but they may as well be worlds away for those trying to recover from drug or alcohol addiction.

The Recovery Ranch and Free Ministry — located in Loris and Green Sea, respectively — have  taken a traditional 12-step recovery program and coupled it with relative isolation.

Christa Reynolds, who runs the Recovery Ranch with her husband Richard, and founder of Free Ministry Jimbo Boudreau take people in to their nonprofit organizations. Both funded by donations, the nontraditional recovery programs are about as far from a luxury rehab facility as you can get.

Trailers, construction projects, dogs and cats dot both sites, evidence of the people who live and work there. But other than that, there’s not much. Along with community and faith, that’s what helps the recovery process, Reynolds and Boudreau say.

Horry, among the state’s largest counties, has long struggled to deal with the drug crisis. In 2017, the county reported 103 drug-related overdose deaths, trailing only Charleston County with 118, according to the South Carolina Department of Alcohol and other Drug Abuse Services.

It’s only worsened during the coronavirus pandemic, as people have been left feeling stressed, isolated and sometimes hopeless. Nationwide, drug overdose deaths have reached an all-time high during the pandemic, the Associated Press reports. Even before COVID-19 set in, the U.S. was in the midst of the deadliest drug overdose epidemic in its history, with a record 71,000 overdose deaths last year, according to the AP.

Reynolds and Boudreau see the trend firsthand. Both say they saw a spike in people seeking their services in recent months, partly because of the mental effects of the pandemic and resulting isolation, but also because area homeless shelters cut back on their capacity to curb the spread of COVID-19.

On a recent fall afternoon at Free Ministry, one man detailed his trip to Myrtle Beach. He was meant to come for vacation, but “drugs were so easy to get” that he found himself in a hole he couldn’t dig himself out of.

“I didn’t know anything about Myrtle Beach and it was still so easy to get,” he said.

Eventually, he ended up at Free Ministry in Green Sea. On acres and acres of land, neighbors are few and far between, so drugs are harder to come by.

James Sechler, another resident at Free Ministry, said he’d been struggling with opioid addiction for 10 years. He’d had sober streaks before, but he was “never in it to win it until I got here.”

“I don’t know where I’m at, but Jimbo and Lynn, the first day, showed me nothing but love,” he said.

As residents finished up chores at the Ranch for the day, one young woman approached Reynolds and sighed, apologizing for an earlier spat between the two of them.

“Detox be real,” she said, referring to the grueling emotional and physical impacts of withdrawal from drugs.

The two hugged, and Reynolds explained that the residents of the Ranch sometimes fight, just like family, and those fights can be more intense when coupled with withdrawal symptoms and other health issues. But just like family, she said, they make up.

On paper, Reynolds and Boudreau now lead parallel lives trying to lead others out of the “chains of addiction.” Both wake up to fields that stretch for acres, ready to serve people who were once strangers, but who they now have no hesitation to call family.

Years before starting their respective organizations, the pair had settled into their own routines — Reynolds as a high-achieving real estate agent and Boudreau in what he described as his “career as an international drug dealer.”

After graduating from the University of West Georgia, Reynolds lived in Myrtle Beach’s ritzy Grande Dunes neighborhood, raising her kids in a house with eight bathrooms. With her husband, she owned two businesses and held her own in the “dog-eat-dog” world of real estate.

But something was off.

“The anxiety was insane and I thought that it was just because of real estate and kids, you know, and low blood sugar,” she said. “And I had the shakes because I was drinking three bottles of wine the night before and [trying to] get up and manage and function.”

A few years earlier, not far away, ex-Hell’s Angel biker Boudreau was homeless in Myrtle Beach with two toddlers. To feed them, he rummaged through the Dumpster in a Krispy Kreme parking lot on 6th Avenue, just blocks from where tourists knocked back beers and dotted the beaches. Heroin, he said, had a hold on his life.

“Heroin was the worst thing that ever happened to me,” he said. “I could do anything on it. But without it? Sick. You have this coffee, early in the morning to get up, the only way you could do it was with the shot. I had a shot by my bed, I had to have one to get up in the morning.”

Both Reynolds and Boudreau fought their way through their own addictions, which they say put them at an advantage to help those who come to them in need. They also credit their recovery in part to strong faith, something they often pass along to those who come to Free Ministry or the Recovery Ranch.

“When they don’t have the hope or the vision to be able to move past it, they’re so stuck in the chains of addiction that unfortunately they just don’t see any way out, it can be devastating … when you know there’s freedom, you know that they can have a different life,” Reynolds said.

Because he’s gone through his own twisting path of recovery, Boudreau says he can meet people “on their level.”

“If you don’t come from this, I can’t see anybody hanging out long,” he said about running an addiction recovery program as someone who has struggled with addiction himself.

The two have added a work element to their recovery programs. Boudreau, who owns Freedom Builders construction, employs 14 of the roughly 40 men at Free Ministry and has set up a trade school through the ministry, hoping to prepare the men for the workforce. At Reynolds’ Recovery Ranch, residents help take care of more than 80 animals and contribute to construction and odd jobs around the property.

With more than 4,000 people coming in and out of Free Ministry in its 12 years of operation, Boudreau sees himself as something of a “lifeguard.”

On a recent afternoon, around 20 men at Free Ministry gathered around picnic tables and lawn chairs, the sun shining through the trees. The men were silent as Boudreau spoke, until he asked how many of them believed they would be dead if they didn’t find something like Free Ministry.

Muffled comments like “amen” and “absolutely” rippled through the huddle as about half raised their hands.

Boudreau knows what that’s like. Shortly before spending more than 18 years in a Florida prison on drug charges, he bought black spray paint to cover his mirrors.

“I was thinking about all the people who maybe [overdosed] and died off my drugs,” he said. “I couldn’t look at myself.”

Years later, after being released from prison and becoming addicted to heroin, Boudreau attempted suicide. But now, “this place keeps me long-term sober,” he said, gesturing at the trees and small homes on his land in Green Sea. Shortly after, the men returned from their work sites and community service projects. Boudreau clapped them on the back and tossed greetings their way, most with a bite of sarcasm.

The Recovery Ranch and Free Ministry house around 40 people each, though both are working on expanding. A hodge-podge of people becomes a community because, as Reynolds says, “addiction doesn’t discriminate.”

Boudreau has helped priests, cops and doctors on top of fellow bikers like himself.

Once people leave urban areas like Myrtle Beach behind, Reynolds says “life slows down.” Then, she says, they’re able to shift their focus to their recovery.

“We are all treated as a whole,” Reynolds said. “And therefore the isolation and the aloneness and the ‘poor me, poor me, pour me another’ dissipates, and it has to.”

Mary Norkol covers homelessness for The Sun News, a newspaper based in Myrtle Beach, South Carolina. This dispatch is part of a series called “On the Ground” with Report for America, an initiative of The GroundTruth Project. Follow her on Twitter: @mary_norkol