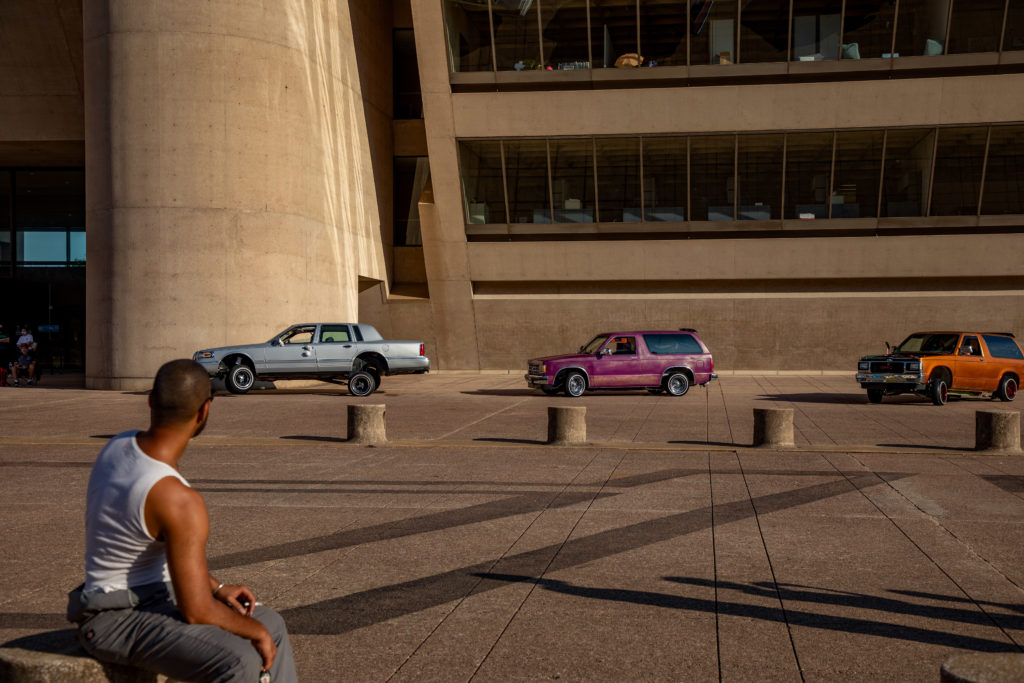 DALLAS – The news about Vanessa Guillen broke on the weekend America was set to celebrate the Fourth of July. The 20-year-old Fort Hood soldier from Houston was found dismembered months after going missing. In response, hundreds gathered at Dallas City Hall on July 7 to hold a vigil for her, singing traditional Mexican funeral songs, roaring lowrider car engines and speaking about abuse in the military.

Carlos Quintanilla, the founder of Acción America, an immigrant rights organization, said it was the biggest vigil for Vanessa Guillen in all of Texas.

“It angered people that this could happen to one of our children,” Quintanilla said. “That’s how people saw Vanessa Guillen. She could have been anyone’s daughter.”

Videos of cars with Confederate flags, “Back The Blue,” and “Trump 2020” signs parked at Friendship-West  — where a “Black Lives Matter” banner hung proudly from the entrance — spread on social media. The posts gained over 250k views in a single afternoon.

Later that night, church members and activists with Next Generation Action Network quickly organized a rally in response — marching from Dallas police headquarters to the doors of First Baptist Church downtown.

Stacey Rasheed, 47, was among the church members who came out to protest, and said she felt she had to support her community. “It’s upsetting we’re still fighting the same fight,” she said, referring to the racial inequality in the United States.

Heightened tensions between the Dallas Police Department and community leaders have sparked local gatherings to demand defunding the police, and even resulted in the resignation of the Dallas Police chief in September. As the Dallas City Budget rolled out a proposed plan for the 2021 fiscal year, the $500 million budget remained largely intact, despite outcries from Dallas activists to re-allocate $200 million into housing, health care, job training and other social services.

In a continuation of the city’s recent street activism and community organization, as city officials spent over 12 hours finalizing the budget at the end of September, news broke over the indictment of Breonna Taylor’s killer. Two hundred people organized in different parts of the city to protest, knocking on city hall’s door to demand that Dallas officials defund the police.

“Say Her Name!” rang through the air, as protesters held their middle fingers to the helicopter above, and marched through downtown Dallas for hours. Although Breonna Taylor’s case was playing out in a different state, local activists fear the same culture is present in Dallas.

One of them said that when he first founded the Next Generation Action Network in 2014, it was the same year the Dallas Police Department had the highest police brutality per capita.

“We’re tackling the culture of policing that is the same in Dallas as it is in Kentucky,” Minister Dominique Alexander said. “The reality is, if we limit the problems to the jurisdiction, we’re not tackling the issue and the culture.”

The city, forever marked by JFK’s assassination in 1963, has a withstanding history when it comes to homicides and death by guns. Recently, Dallas fell into the national spotlight again following the trial of Botham Jean’s murder in his apartment by a Dallas police officer in 2018. Although the police officer was sentenced to 10 years in prison for wrongful death, many other local cases never get justice.

Quintanilla said family members of people killed or gone missing reach out to him every day. “Even though it’s very painful, I’m gonna do whatever we can to get justice,” he said.

Time after time, trauma after trauma, Dallas mobilizes. Although the community is no longer gathering for concerts, festivals, or the state fair this summer, they’ve gathered to protest, host vigils, and show up for their community in tough times. It may be a city, but Dallas has the heart of a small, tight-knit, local community.

“We have to make this city uncomfortable,” Alexander said. “Change happens when people are on the necks of this government.”

Keren Carrión is a visual journalist for KERA in Dallas and a Report For America corps member. This dispatch is part of a series called “On the Ground” with Report for America, an initiative of The GroundTruth Project. Follow her on Twitter: @kerencarrion8, and on Instagram: @kerencarrionphoto.