ON THE GROUND IN MILWAUKEE, WI 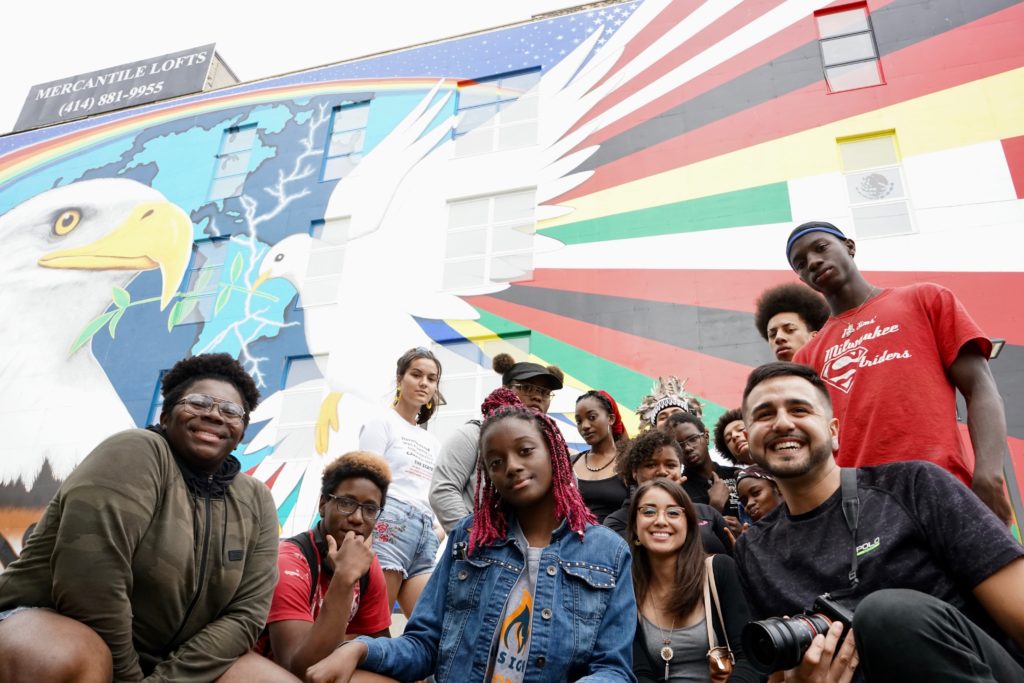 Student members of Leaders Igniting Transformation stand in front of the "Mural of Peace” during a tour about youth resistance in Milwaukee, Wis. (Photo by Adam Carr)

MILWAUKEE, Wis. — Students, teachers and community members rallied in front of the Milwaukee Public Schools (MPS) central office on June 17 to call for an end to the school district’s contract with the Milwaukee Police Department.

Hundreds of people gathered in a chant led by Leaders Igniting Transformation, an organization led by young people of color, lending a unified voice of dissent to an increasingly prevalent issue: police officers in learning environments. The presence of police officers on campus has a particularly negative effect on students of color, and could lead to a school-to-prison pipeline, according to the group’s recent report, jointly authored by the Center for Popular Democracy.

Milwaukee Public Schools is the largest school district in the state, with about 75,000 students — nearly 90% of whom are students of color. The district had set aside nearly one million dollars for police contracts in the 2019-20 school year, when the overall budget was more than $1.2 billion.

A day after the rally, the school board voted unanimously to end contracts with the city police department, a major victory for L.I.T. and its mostly Black and brown student leaders.

One of them is Priyana Cabraal, a high school junior who’s learning the ins and outs of public policy while attending school board meetings and organizing rallies. Cabraal is a fellow for L.I.T., which focuses on leadership development through electoral organizing and direct action.

“We do a lot of organizing and planning that people wouldn’t attribute to us,” said Cabraal, who joined the group because she saw women of color making a difference in her community.

Founded in 2017, L.I.T. organizes young people on campuses and in communities across Milwaukee to “build independent political power for social, racial and economic justice,” according to the nonprofit’s website.

Kris English, a sophomore at Milwaukee Public Schools, is a L.I.T. fellow like Cabraal, and got involved because he wanted to take action.

“I feel like I am changing things for the next generation,” English said.

And Yaniiz Rosario, 19, joined the organization because she wanted young people to be part of the fabric of change and representation within their communities. Rosario has seen what voter apathy looks like in Milwaukee, she said, noting that many people think their vote doesn’t matter because nobody reached out to teach them how to vote or how to decide on a candidate.

“I organize people to advocate for themselves,” Rosario said. “Teach them to get their voices heard and respected.”

Rosario works with L.I.T. to promote establishing polling places on college campuses, expanding early voting hours and locations, as well as recruitment of bilingual poll workers (Spanish & Hmong). Perhaps most importantly, the group works with local officials to ensure that redistricting will not dilute the vote for communities of color.

“There are so many barriers in the voting process put in place for a reason,” said Cabraal. “Your vote can change something and even though I can’t vote yet, I’d like to see that change.”

This kind of activism is not new to Milwaukee, where local civil rights activists marched for more than 200 days during the high-profile fair housing marches of 1967. The members of L.I.T. – as the youth in Milwaukee have long done – are drawing on that history to amplify their voices in upcoming elections, and in turn amplify the voices within their communities. They carry on a tradition of participation in the democratic process even before being eligible to vote, maintaining a precedent for civic duty and action in a city proud of its political engagement.

Young people are in the spotlight of social justice more than ever according to Sharlen Moore, the executive director of Urban Underground, which has been working with youth to build safe and sustainable communities through youth-led social justice campaigns in the areas of health, education, and public safety.

“Life circumstances like the death of George Floyd and Breonna Taylor catapulted inequities in people’s faces,” said Moore, whose organization has been fighting for juvenile justice reform for over 20 years. “Things that people have been working on for decades are being highlighted and youth are at the core of that.”

During the 2018 election, L.I.T. volunteers knocked on more than 35,000 doors and collected over 10,000 voter pledge cards, according to executive director Dakota Hall.

Cendi Trujillo Tena is L.I.T.’s high school organizing director, and has been with the group since its beginning. In her experience, young people have the tools to make a change, but they need guidance in learning to advocate for themselves.

“I am hopeful that today’s young people are much more radical, more intersectional and more receptive than their elders,” she said.

Through this work, high school fellows English and Cabraal are being trained to become organizers.

“We organized a rally and had around 500 people come out,” said English.

Though not all L.I.T. fellows plan to make organizing their long term career, the advocacy and civic engagement training the group provides will develop skills in them they can carry into their respective futures.

English aspires to be a professional basketball player after high school and still hopes to be active in his community.

“The goal is to create politically educated Black and brown youth that will become leaders, organizers and activists,” said Amanda Avalos, L.I.T.’s senior civic director. “And they will work with the aim of dismantling systems that harm them.”

PrincessSafiya Byers covers health, minority businesses, faith, jobs, housing and transportation for the Milwaukee Neighborhood News Service, which focuses on low-income minority residents. This dispatch is part of a series called “On the Ground” with Report for America, an initiative of The GroundTruth Project. Follow Byers on Twitter: @PrincessSafiya3.