How Petraeus will change the Afghan war 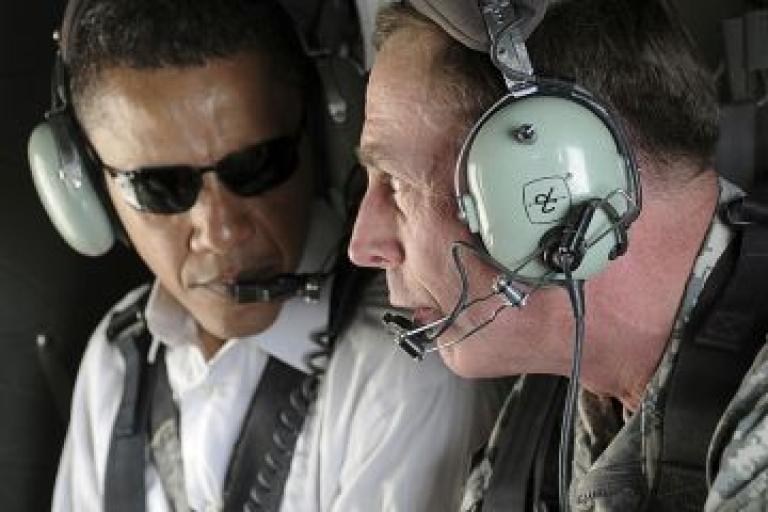 BOSTON — President Obama’s decision to call upon General David Petraeus to take the helm as the top U.S. commander in Afghanistan looks like a political and strategic stroke of brilliance.

It is history in the making.

But it is also history that will ultimately be the judge of this dramatic and surprising decision to sack General Stanley McChrystal and once again offer the reins and responsibility of commanding troops at a pivotal moment in a war that is faltering to General Petraeus.

Politically, it allows Obama to show leadership and strength in stripping McChrystal of command for his poor conduct in the comments he made to Rolling Stone magazine in its cover story titled “The Runaway General.”

Strategically, it gives the administration the ability to show a stable command as the Kandahar campaign against the Taliban gets underway.

But perhaps most importantly, this decision will be applauded by troops in the field who see Petraeus as a genuine American hero. It will defy the cynical military axiom of “different spanks, for different ranks.”

This time, a big general got “spanked” just like any other grunt or staff sergeant who showed conduct that eroded the trust of the military.

And that will go over big with the service men and women who are risking their lives in a war that has dragged on for nine years and that has called upon them to make extraordinary sacrifices.

As Obama put it, “War is bigger than any one man or woman. … Conduct represented in the recent article does not meet the standard of a commanding general. … It erodes the trust that is necessary for our team to work together to achieve our objectives in Afghanistan.”

For sure the decision is getting positive reviews, at least in these early hours. And Petraeus is likely to be quickly confirmed by the U.S. Senate and soon be on his way back to Afghanistan and back into the field as top U.S. commander as he was in Iraq, where he led the effort through the crucial — and by most accounts successful — moment of the Baghdad surge.

But what this decision also offers is a dramatic difference in personality and style of leadership between Petraeus and McChrystal. That difference was starkly illustrated in the uproar over the Rolling Stone article.

The comments that McChrystal, a former head of special forces and a maverick field commander, and his aids made to the magazine were reckless. And that is always the flip side of a maverick’s coin even one with as distinguished a career as McChrystal has had.

If McChrystal is reckless, Petraeus is measured. If McChrystal is a maverick known for being both brilliant and blunt, Petraeus quietly asserts leadership and affects change from within. McChrystal is known for mixing sprints in with a strict running regime which is followed up without a meal so he “stays hungry,” as the legend goes. Petraeus is a marathoner who understands the need for small intake of nutrition throughout the day if he’s going to go the distance. If McChrystal reads Rolling Stone, Petraeus prefers Thucydides.

So what might this difference in leadership style mean in the direction the war in Afghanistan? That is the looming question now.

What Petraeus brings to this war is discipline and an understanding of history. Both of these are needed right now in a moment where the U.S. effort is failing.

The Rolling Stone article highlights not just some off-the-cuff remarks by McChrystal that got him in trouble, it reveals a dangerous fault line between the U.S. State Department and the Pentagon over the direction and goals of the war. That division between civilian and military strategy is real and it is important and how Petraeus will bridge the divide remains to be seen.

I first met Petraeus in the spring of 2003 when he was commanding the 101st Airborne Division just after he had executed a massive and successful air assault on northern Iraq. It put him on the map, and soon he would obtain a kind of rock star status, eventually landing on the cover of Newsweek. The rest, as they say, is history.

When Petraeus briefly fainted at hearings in Washington earlier this month it was a scary and out-of-character moment for those who have gotten to know him. He has incredible stamina and the episode may indeed have occurred because, as he claimed, he was simply dehydrated. But Petraeus is also a survivor of prostate cancer and his health and his ability to take on the grueling task of running the war in Afghanistan is indeed an “extraordinary sacrifice,” as President Obama noted, for the man and his family. Still his health and ability to carry out this task will no doubt be raised in the hearings.

But the more important matter will be what changes, if any, Petraeus will want to bring to the table in Afghanistan.

Even if Petraeus is known for quiet diplomacy, it should be remembered that Petraeus also had profound disagreements with the George W. Bush White House and with Secretary of Defense Donald Rumsfeld in particular. The disagreements were never visible to reporters when they happened, but they have since come to the surface, according to insiders who were there.

In a nutshell, Petraeus believed Rumsfeld was wrong about troop levels in Iraq and asserted that they were insufficient and he also quietly criticized the wisdom — or lack of it, as he saw it — of the so-called “de-Baathification” of the Iraqi military. In the chaotic aftermath of the collapse of Saddam Hussein’s Baath Party regime, “de-Baathification” was the process of going after and jailing the Iraqi military leadership rather than seeking to bring them into the process of building a future Iraq.

That policy and the delay in calling for a troop surge are both viewed as significant and costly mistakes in the U.S.-led war in Iraq. Petraeus never voiced them publicly, instead he quietly retreated to a command at Fort Leavenworth and took to gathering the military’s best minds on counter-insurgency (COIN) and started writing a new COIN field manual for the troops.

That document became the blueprint for what is now looked back on by most military analysts as a successful surge. That strategy created the stability that allowed Iraq to hold elections and move forward in taking control of its own destiny, a process that’s still unfolding.

As the 30,000-U.S. troop surge takes place in Afghanistan and the U.S. braces for a stepped up military campaign in Kandahar this summer, Petraeus might try to redirect that campaign. There are many elements of the design of the counter-insurgency in Kandahar that seem to defy the very COIN manual that Petraeus authored.

What is clear is that Petraeus has a chance to once again write history in the parched, dusty, windblown plains of yet another conflict that is faltering badly as he enters the helm.