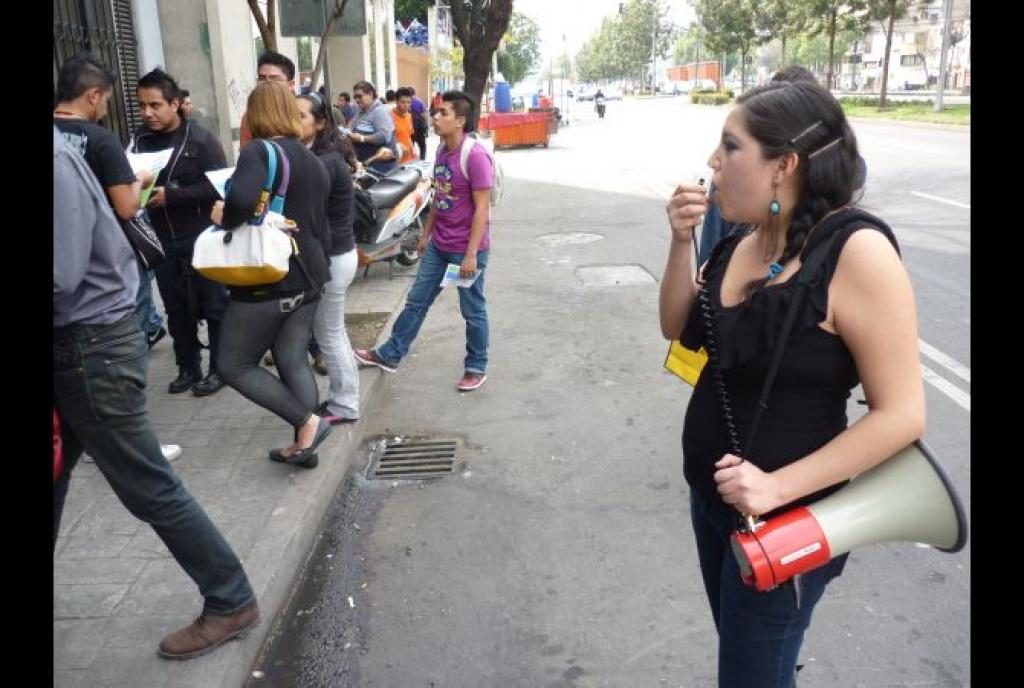 MEXICO CITY – During a 5.6-magnitude earthquake, Eduardo Vargas rose from his cubicle at the Atento call center in Mexico City and tried to evacuate the swaying building.

Although no one at the call center was hurt, the shoddy treatment prompted Vargas and a few dozen co-workers to join the Mexican Telephone Workers Union to press Atento to raise their dollar-per-hour wages and improve working conditions. But to their surprise, they learned that they already belonged to a union.

That’s because when they were hired by Atento, which is owned by the Spanish telecommunications giant Telefonica, they unwittingly signed up for a pro-business union that works in cahoots with the company to suppress wages and maintain a docile labor force.

Under Mexican law, the union with the most members — in this case, the official Atento union — controls contract negotiations. As a result, Vargas and other employees who defected to the more militant Telephone Workers Union had no bargaining power.

“When unions fail to defend workers,” Vargas said, “everything is lost.”

The Atento case, which has turned into a cause célèbre for labor activists in the United States and Europe, is a prime example of the power and omnipresence of company unions which help employers in Mexico minimize costs and stand firmly in the way of workers as they try to boost their wages and working conditions. Nearly all unions in Mexico “protect the patron and not the worker,” said Maria Xelhuantzi Lopez, a political science professor at Mexico’s National Autonomous University.

About 10 percent of Mexico’s labor force carries union cards but nine out of every 10 members belong to secretive and undemocratic pro-business unions, Xelhuantzi-Lopez said. Thus, she estimates the proportion of Mexican laborers who belong to real unions that fight for their rights at about 1 percent which would represent one of the lowest unionization rates in the world.

In Mexico, sham worker syndicates are known as “protection unions.” Their leaders, who often receive kickbacks, negotiate secret deals with company bosses designed to shield businesses from strikes and worker demands for substantial increases in wages and benefits. These agreements, in turn, are known as protection contracts.

Protection unions and contracts are illegal in the United States. However, about 60 percent of the foreign multinational companies operating in Mexico are US firms and “virtually all of them benefit from protection contracts,” said Robin Alexander, director of international labor affairs for the US-based United Electrical, Radio and Machine Workers union.

Like Vargas and the other Atento employees, most Mexican workers are unaware they belong to protection unions because these unions don’t collect dues while union leaders have almost no contact with the labor forces they nominally represent.

They also try to hoodwink workers by employing belligerent, power-to-the-people language when, in fact, workers receive the bare minimum, said Carlos de Buen, a Mexico City labor lawyer. For example, if a business is required by law to pay workers two-week bonuses, a protection contract might state: “Under no circumstances shall the employer pay the worker anything less than a two-week bonus.”

According to a recent U.S. State Department report, the abuses are so brazen that at new job sites, companies often sign protection contracts with union leaders before they hire a single worker.

Race to the bottom

Because they rob Mexican workers of leverage, protection unions depress salaries which have been falling in real terms for the past 30 years, De Buen said. This wage stagnation also hurts American workers by encouraging US factories to relocate south of the border and by depressing Mexican demand for US exports.

“When that happens, workers in both countries get screwed,” Dan Kovalik, a top legal advisor for the United Steelworkers, told GlobalPost.

As a result, Kovalik and other US union activists, many of whom used to view Mexican factory workers as the enemy for taking their jobs, are now offering them support, advice and solidarity as they try to break the stranglehold of protection unions.

For too long, multinationals “have been able to divide us by race, border, language and political orientation, while increasing their profits,” United Auto Workers President Bob King wrote last month in a letter of support to Mexican workers who earn just $16.50 per day at a Honda auto plant and are trying to form an independent union.

“As unionists, we have to figure out how to work together regardless of our national identities,” King wrote. “Otherwise, we’re going to continue competing in a race to the bottom.”

But forming democratic unions can be a long, demoralizing march.

Since the organizing drive began at Atento following the 2009 earthquake, the government labor board has presided over three elections in which employers chose between the protection union and the independent Telephone Workers Union. But all three votes were marred by irregularities.

In some cases, management refused to release workers from their jobs to cast ballots. Others were blocked from entering voting booths by armed guards or threatened with termination if they opted for the wrong union, according to former Atento employees. Repeated requests by GlobalPost for comment from Atento were ignored.

Today, Atento’s protection union remains in place while activists, like Vargas, have lost their jobs.

“They said it was for low productivity,” said Vargas, an intense 25-year-old who now makes a living selling soda and beer at soccer games. “But everyone knows we were fired for trying to start a new union.”

Mexico’s protection unions are the legacy of a political system that Nobel Prize-winning novelist Mario Vargas Llosa once described as “the perfect dictatorship.”

For most of the 20th century, Mexico was controlled by the Institutional Revolutionary Party, or PRI. Though sometimes compared to the old Soviet Communist Party, the PRI is credited with giving Mexico the longest period of peace in the country’s history during a time when other Latin American nations were wracked by labor upheaval, abusive military regimes and guerrilla wars. Unions, it turns out, were key to the PRI’s system of command and control.

Mexico’s largest confederation of workers, known as the CTM, was founded in 1936 as part of the PRI and affiliates automatically became party members. That allowed union bosses, like Fidel Velazquez who headed the CTM for 56 years, to deliver thousands of votes to PRI candidates.

In return, labor leaders received payoffs, political posts and other perks. Working together with business owners and government officials, union leaders would also keep their workers in line. Increases in wages and benefits were small enough to mollify companies yet just large enough to stave off worker revolts.

“It’s been said that Fidel Velazquez brought labor peace to Mexico,” De Buen said. “But it’s like the Chicago mafia of the 1930s. It’s a totally undemocratic system in which the last thing that matters is the worker.”

The PRI finally lost power in the 2000 election but subsequent administrations have maintained the unseemly triad between government, business owners and labor leaders in the name of maintaining low wages and global competitiveness.

“It doesn’t matter if it’s right-wing or left-wing, the government is an accomplice,” Xelhuantzi-Lopez said.

Mexican government officials did not respond to requests from GlobalPost for comment. However, De Buen pointed out that in a 2010 response to a complaint filed before the UN-run International Labor Organization, the government denied that protection unions and contracts even exist.

But according to the latest US State Department report on human rights, protection unions are expanding in Mexico and now cover nearly all public and private sectors of the economy. By contrast, the report noted that “workers who sought to form independent unions risked losing their jobs, as inadequate laws and poor enforcement generally failed to protect them from retaliatory dismissals.”

One of the most brazen examples of a company leaning on a protection union occurred this year at Arneses y Accesorios, which was once owned by the U.S. aluminum firm Alcoa but was sold last year to PKC Group of Finland.

Arneses y Accesorios, which is located in Ciudad Acuña on the US-Mexican border, produces wiring harnesses and components for American. cars and trucks. Many of its 7,000 workers complained about their $1.35-per-hour wages, dangerous chemical leaks and restrictions on bathroom breaks. They wanted the National Miners and Metalworkers Union, one of the few Mexican unions with a reputation for fighting hard for worker rights, to represent them.

But after the union approached PKC about contract negotiations, company executives quickly signed a protection contract with the CTM, the workers confederation that critics contend serves as a stooge for corporate interests. In a Jan. 31 message to employees at the plant, Harri Suutari, PKC Group’s president and CEO, seemed to acknowledge that the CTM had been brought in to serve the company, not the workers.

“In order to protect itself and jobs, the company has decided to sign a collective agreement with the CTM,” Suutari said. “How much will the union dues be? Nothing, because the company is going to pay them so that the CTM does not enter the plants and has nothing to do with you.”

Democratic unions can prevail over protection unions but examples can be counted on one hand.

That’s why labor activists often refer to a lengthy 2010 conflict at an auto parts factory in the city of Puebla owned by Milwaukee-based Johnson Controls, a Fortune 500 company with operations on six continents.

The dispute began over bonuses. Under Mexican law, 10 percent of a company’s annual profits must be shared equally among the labor force but workers were offered just $5 each. That prompted a majority of the workers signed affiliation cards with the Miners and Metalworkers Union even though the company already had a deal with a protection union.

Soon afterwards, 70 members of the protection union showed up outside the factory in a show of force. Workers also faced trumped-up accusations that they had kidnapped company executives. Still, employees held firm and eventually announced a work stoppage.

Shutting down the assembly line for very long could have affected deliveries to Mercedes-Benz, Nissan and other auto makers and might have led to major fines against Johnson Controls. As a result, the company quickly recognized the Miners and Metalworkers Union and ended its relationship with its protection union.

In the collective bargaining agreement that followed, workers who were receiving minimum wage secured a 7.5 percent salary plus school aid payments of about $50 per child and increased insurance coverage.

“It was a standout victory because it was so hard to do,” said Kovalic of the United Steelworkers which provided support and advice Johnson Controls workers. “And it’s especially significant for American workers because it involved an American company.”

Although the union uprising in Puebla lifted the spirits of Mexico’s democratic labor movement, many activists say it was an aberration in what’s turning out to be a long and perhaps unwinnable campaign.

For example, Johnson Controls this month announced plans to close the Puebla factory. Indeed, most attempts to fight back against protection unions end with lots of workers receiving pink slips.

Vargas, who was fired by Atento for his activism, refuses to give up. He is now a volunteer organizer for the independent Telephone Workers Union and is trying to sign up his former Atento co-workers, one by one.

On a recent afternoon, Vargas stood outside one of Atento’s call centers passing out leaflets detailing the low wages negotiated by the company’s protection union. But with security guards keeping close watch, most Atento workers hustled out the door at the end of their shifts and hurried past Vargas without giving him a second glance.