ON THE GROUND IN MACON, GA

How listening to teenagers can broaden journalism’s perspective 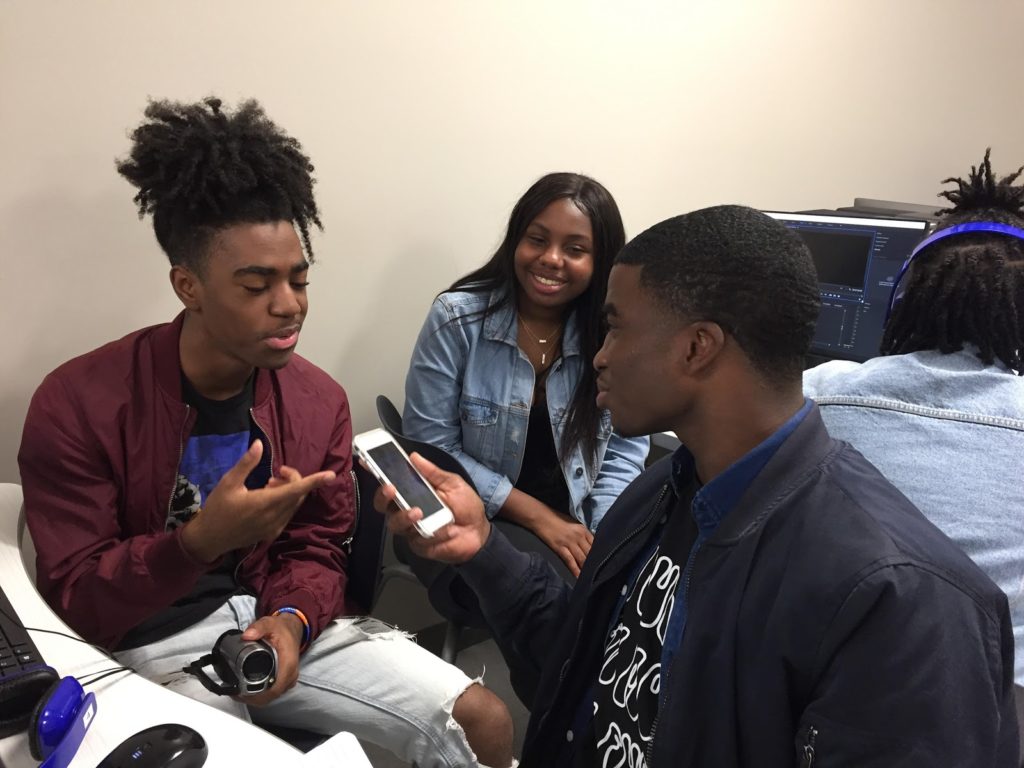 Students at the Williams S. Hutchings College and Career Academy practice recording on their cell phones for podcast production. (Photo by Samantha Max/GroundTruth)

MACON, Ga. — Jy’Nivea Troutman hides on the floor of her bedroom when she hears gunshots outside her window. That’s just what you do on Saturday nights in her neighborhood, she’ll tell you.

But Troutman, 16, would much rather talk to you about her school’s dress code. She thinks her school’s policy is too strict — and that girls are more likely to be penalized for wearing what they love. She even made a 16-minute podcast episode about it.

Troutman learned the basics of audio reporting in a podcasting workshop I led in Macon as part of my participation in Report for America.

Throughout the school year, I spent a couple hours each week teaching the media students at the William S. Hutchings College and Career Academy how to make a podcast. Here in Macon-Bibb County, where only 25% of residents earn at least a bachelor’s degree and just as many live in poverty, pre-professional programs like this one can provide a path to employment for students who might otherwise fall through the cracks.

Macon-Bibb County is unlike any other place I’ve lived before. It’s made up of a small city, along with a few suburbs, but overall just feels like a small town. With a population of about 150,000, it grapples with many of the same issues as my hometown of Baltimore: racial segregation, urban blight, socioeconomic inequality and government corruption, just to name a few. But at one-fourth of Baltimore’s size, the issues feel magnified, never far from sight.

Macon is often in the news for its crime and poverty. I am struck by how many other stories go untold. Before my students graduate and enter the workforce, I wanted to provide them with an opportunity to tell those stories. Their stories.

As an outsider without a single connection to this community when I moved here last year, I met with countless adults who helped me understand the inner-workings of this small city I now call home. But my students painted a different picture of this place, one that adults rarely talk about, at least not in explicit terms. One week, a student told the class that he struggles to balance his schoolwork and late-night shifts at Burger King. Another shared that he’d been kicked out of his first elementary school when he was 6 years old for bringing his older brother’s BB gun to school.

My students  told me they struggle to find things to do on the weekends. The local skating rink, where kids and teens used to congregate, closed in 2017. The nearby mall is virtually vacant, and most businesses have moved uptown to the wealthier suburbs.

They’re frustrated with the schools’ emphasis on standardized testing and the random backpack searches that feel like invasions of privacy. Some fell asleep during our weekly sessions or stare off into the distance during my lectures, and I couldn’t help but wonder — and worry — what’s keeping my students up at night.

Kids’ and teens’ voices are often left out of news reporting. Their names and ages appear in stories when they win an award or commit a crime, but we rarely get a full picture of who they are. The omission is partly a matter of logistics. Adults want to protect minors’ privacy. Journalists don’t want to overstep, or they don’t know how to gain access into the inner-world of the youth in their community. But their voices matter. It’s on journalists like me to explain the reporting process to teens and give them a platform to share their insights and opinions.

Until then, my former students are changing the narrative. They’re reporting on topics the local newspaper probably wouldn’t think to cover, like teen dating and post-graduation plans, and offering an adolescent perspective on topics we already write about, like business trends and mental health. They’re exploring subjects that they care about, that they wouldn’t normally be allowed to investigate for class.

And they’re changing how I do my job.

I’m constantly thinking about how to get to know my sources as more than one-dimensional characters. I struggle to write about subjects like blight, homelessness and poverty that incorporate personal narratives without tokenizing the people I interview. My students served as an informal focus group for my reporting. When I was working on a story about food deserts, I talked to them about how the shuttering of a nearby Kroger had affected their families’ ability to buy groceries. When I wrote a story about proposed legislation in the Georgia legislature to remove the sales tax from feminine hygiene products, I asked my students how they pay for their own pads and tampons.

For two hours a week, I could talk to my students about what it’s like to be a teen in this town. As we listened to clips from different podcasts, we delved into discussions about racism, police-community relations, crime and food insecurity. My students shared childhood memories and complex theories about society and crude jokes I pretended not to hear.

For two hours a week, my students had a space to open up, to be themselves without judgment, to be heard. I worked hard to earn their trust and let them know I’m listening. I hope you’ll listen, too.

Samantha Max is a Report for America corps member. From 2018-2019, she was based in Macon, Georgia, covering health and inequity at The Telegraph. She now covers criminal justice for Nashville Public Radio. This essay is part of a series called “On the Ground,” supported by The GroundTruth Project. Follow her on Twitter @samanthaellimax.